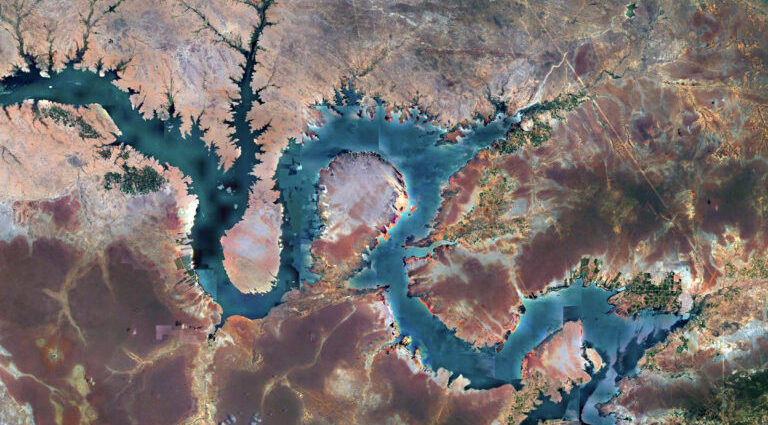 As if all the strategic and political aspects of the Putin-Bolsonaro alliance weren’t detrimental enough, underlying environmental considerations add yet another undesirable dimension.  Meeting with Putin at the Kremlin literally one week before Moscow invaded Ukraine, the president of Brazil posed for photos with his Russian counterpart.  Far from expressing any concern about looming Russian aggression, Bolsonaro remarked that he stood “in solidarity with Russia,” and “my reading of President Putin is that he is a man of peace.”  Apparently, Bolsonaro feels an affinity towards Putin, since both politicians have adopted a macho persona while embracing authoritarianism, nationalism and cultural conservatism.

Beyond such common personality traits, however, Bolsonaro’s meeting with Putin reflects the growing importance of Brazilian agribusiness, which represents a quarter of the South American country’s GDP.  Brazil is the world’s largest exporter and producer of soybeans, which are mostly used for animal feed, and agribusiness provides key political and financial support to Bolsonaro.  Indeed, during the 2018 presidential election, Brazil’s farming sector overwhelmingly backed Bolsonaro’s candidacy, and, since that time, the ruralista agribusiness lobby has managed to secure influential support in Congress.  Brazil imports most of the fertilizers it needs to farm soybeans, in addition to other crops.  Significantly, Russia is the source of almost a quarter of such fertilizer imports.

Reportedly, the Brazilian Foreign Ministry has been muted in its criticisms of Russia at the United Nations due to political pressure from agribusiness, and diplomats have expressed concern that sanctions against Moscow could affect fertilizer imports.  During his meeting with Putin, Bolsonaro exclaimed that without such “sacred” fertilizer, his country would experience “serious harm.”  Specifically, the South American nation relies on substantial Russian imports of potash, phosphate and nitrogen, all of which are considered vital fertilizer nutrients.  Bolsonaro boasted that his shoring up of Putin prompted the Kremlin to continue fertilizer exports.  Indeed, following the meeting, almost thirty ships full of fertilizer departed Russia for Brazil.

The political quid-pro-quo has already led to negative environmental consequences for Brazil specifically, and for global climate change more generally.  Indeed, nitrogen-based fertilizers are driving up emissions of nitrous oxide (also known as “laughing gas” or N20), a lesser-known greenhouse gas.  As a climate pollutant, N2O can remain in the atmosphere for decades, and the gas is even more efficient at trapping heat than CO2.  If that wasn’t enough cause for concern, agricultural runoff containing nitrogen can give rise to algae blooms which in turn create dead zones within coastal areas.  What is more, within the stratosphere N2O breaks down into smaller molecules which destroy the ozone layer helping to protect the earth from ultraviolet radiation.

Thus far, Russian fertilizers have not been sanctioned and exports are soaring to Brazil.  Indeed, during a recent phone call Putin assured Bolsonaro the Kremlin would provide an uninterrupted supply of fertilizer.  Nevertheless, possible logistics bottlenecks and payment problems have raised the specter of supply chain shortages, not to mention price hikes.  Though purchasing fertilizer has not been banned, Brazilian buyers have had to deal with sanctions on Russian banks as well as logistical obstacles.  Reportedly, buyers have attempted to circumvent difficulties by conducting business through Russia’s Gazprombank, which has been excluded from sanctions.

Could the crisis in Ukraine force Brazilian agriculture to become more sustainable?  In theory, the war could act as a catalyst of sorts, since the conflict has exposed Brazilian dependence on fertilizer imports.  Finding a silver lining within the humanitarian catastrophe would appeal to experts, who recommend reducing fertilizer use, or alternatively embracing organic fertilizers, bio-char, or so-called green manure, that is to say, cover crops which are specifically cultivated so as to increase soil nutrients.

The chances of achieving such responsible stewardship under Bolsonaro, however, seem remote since the president is a notorious climate change skeptic who has called government data dealing with deforestation a “lie.”  Because rising deforestation rates can be tied directly to Bolsonaro’s anti-environmental policies, some even believe the president should be prosecuted as a criminal on par with genocidal dictators.  However, when it comes to international discussions on climate change, Bolsonaro has charged that France, the UK and U.S. have impinged on Brazil’s “sovereignty” over the Amazon, and, needless to say, Putin reportedly backs up Bolsonaro’s criticisms of such pesky foreign meddling.

Meanwhile, Russian potash is linked to Brazilian soybean cultivation, which is in turn driving up deforestation.  For decades, destruction of the Amazon rainforest followed an all-too-predictable pattern of loggers cutting into the jungle, followed by ranchers and farmers moving in to plant soybeans.  More recently, however, the demand for soy has reportedly become so insatiable that large swathes of the Amazon and neighboring Cerrado savanna, both of which are vital for climate stabilization efforts, have been directly converted to soy cultivation.  With deforestation soaring under Bolsonaro, experts warn the Amazon cannot survive if the current president remains in power.

From Oil to Road Projects

In other areas, too, the Bolsonaro-Putin partnership has yielded undesirable environmental consequences.  Take, for example, oil and gas ties: recently, the Brazilian president remarked that his country was close to securing a deal to buy diesel at low cost from Russia.  However, if Bolsonaro follows through on the purchase, he would come up against Western sanctions.  No doubt, Bolsonaro views energy ties as vital to his political survival, since the politician is lagging in polls against his leftist rival, Luiz Inácio Lula da Silva, ahead of Brazil’s October presidential election.  Reportedly, high energy prices have contributed to Bolsonaro’s cratering popularity.

Putin’s oil diplomacy is nothing new: the Kremlin routinely boosts its geopolitical profile through Rosneft, an energy company which is fifty percent owned by the Russian state.  The firm is led by none other than Putin confidante Igor Sechin, a former deputy prime minister and KGB agent.  Environmentalists have criticized Rosneft for pollution, particularly on Sakhalin Island, which has affected fishermen and local indigenous peoples.  The company’s prior record bodes ill for Brazil, since Rosneft owns drilling rights in the Amazon.  Because Rosneft is so large and influential, the company may be able to convince Brazilian authorities to push road projects benefiting its operations.  In addition to such projects, Bolsonaro has also sought Russian help in developing offshore oil production.  Though the Kremlin has called on members of BRICS (comprised of Brazil, Russia, India, China and South Africa) to establish joint oil and gas refining facilities with the Kremlin, investors regard Moscow as “critically insufficient” and woefully unprepared when it comes to confronting climate change.  Indeed, Russian-majority state-owned energy company Gazprom is a huge emitter of industrial greenhouse gasses.

From Nuclear Power Plants to Submarines

During their meeting in Moscow, Bolsonaro also expressed interest in developing cooperation on small nuclear power plants.  Previously, Russian state nuclear corporation Rosatom and Brazil’s Electrobras and Electronuclear signed a memorandum of understanding promoting the use of nuclear power, and Moscow already exports fuel for Brazilian nuclear power plants.  However, Bolsonaro would like to expand the country’s nuclear capacity, and Rosatom has indicated it could assist in the construction of new power units both on land and, worryingly, on sea through use of floating plants.  Brazil and Russia have also agreed to cooperate on radioactive waste management and “increasing public acceptance of nuclear energy.”

In light of Russia’s long history of nuclear crises, environmentalists have expressed serious misgivings about Rosatom’s plans to ramp up exports of deadly nuclear technologies, not to mention company plans to assist construction of nuclear power plants abroad.  Greenpeace has criticized Rosatom’s floating nuclear plants in the Arctic as a “monstrosity,” “Chernobyl on ice” and a “nuclear Titanic.”  “No, we’re not joking,” the environmental outfit remarked, adding, “this isn’t science fiction.  This is really happening.”  Nuclear reactors pose a “shockingly obvious” threat to the Arctic environment, since floating plants could be vulnerable to cyclones and tsunamis, not to mention crashing into an iceberg.

Reportedly, Bolsonaro also took advantage of his trip to Moscow to ask Putin for assistance with Brazil’s nuclear submarine program.  In light of the many environmental problems associated with Russian submarines, however, Bolsonaro’s lobbying seems equally misplaced.  Indeed, such problems go all the way back to the Soviet era, when sunken Kremlin submarines gave rise to a “Chernobyl in slow motion on the seabed.”  In 2000, submarine Kursk sank in the Barents Sea, along with the vessel’s radioactive fuel.

When it comes to protecting the environment, there is no comparison between Bolsonaro and his leftist challenger from the PT or Workers’ Party, Lula da Silva.  During Lula’s previous stint as president from 2003 to 2011, Brazil witnessed reductions in deforestation and the country cut its carbon emissions almost in half.  On the campaign trail ahead of the October presidential election, Lula has said that no Brazilian government can tolerate further deforestation, and the candidate has promoted the creation of green new jobs in the Amazon.  On the other hand, Lula has been decidedly mercurial on foreign policy.  To be sure, the leftist politician criticized Bolsonaro’s visit to Russia, though Lula has emphasized diplomatic neutrality while arguing that sanctions placed on Russia have made things economically worse for the entire world.  Experts believe that if he wins the election, Lula might be pressured to resist international sanctions, since several parties likely to join his coalition are sympathetic to Putin.

Observers point out that under his previous administration, Lula was certainly not hostile to Russia, and indeed the PT leader’s presidential term coincided with the heyday of BRICS.  Recently, Lula flippantly mused, “who cares about this war?”  For good measure, the politician added that he would settle the Ukraine conflict “at a table drinking beer.”  The former Ukrainian ambassador to Brazil criticized Lula’s remarks as disrespectful, declaring that “freedom, democracy and lives are not resolved at a bar table.”  Hardly deterred, the mischievous Lula then claimed Ukrainian president Volodymyr Zelenskiy shared part of the blame for Putin’s invasion, while also blaming Joe Biden for inciting the conflict.  Ukraine’s senior presidential adviser blasted Lula’s comments as “Russian attempts to distort the truth.”

If Lula wins the election, which recent polling seems to suggest, environmental protection will certainly have a fighting chance.  However, given the gravity of the climate emergency, Brazil should go further by embracing a fundamental paradigm shift in its relationship to the Kremlin.  To do so, however, would involve restructuring Brazil’s agricultural and energy sectors in substantial ways.  Given his nonchalant and questionable remarks about the conflict in Ukraine, it seems unlikely that Lula, absent pressure from his ideological leftist supporters, will challenge his party’s foreign policy leanings.