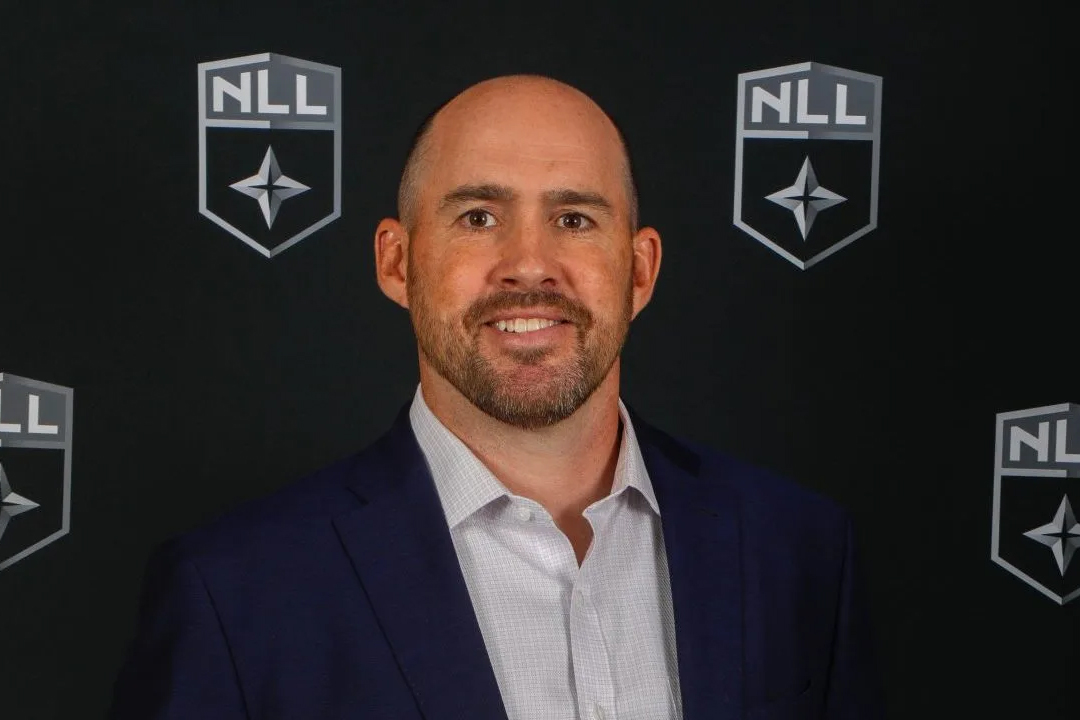 Brett Frood’s passion for lacrosse is evident. He reminisced about the old wooden stick his dad gifted him, his first days playing as an infant and his time as a captain at Brown University with media members Tuesday afternoon.

But when his collegiate career came to an end, it became clear his time as a competitive lacrosse player had reached its conclusion as well. A cup of coffee in the National Lacrosse League was not in the cards. He’d have to be content with trips to play in annual tournaments in Vail, Colorado, and Lake Placid, New York.

“I wasn’t good enough,” Frood said with a laugh. “Certainly my teammates were and my brother was and a lot of my friends that have played in the league. One of my first texts this morning was from Greg Cattrano, who in my opinion is the greatest goalie ever in the sport of lacrosse, played for the New York Saints, and he told me he’s ready to suit up again.”

Two decades later, Frood has finally made it to the NLL, too. The former president of the Stewart-Haas Racing NASCAR team was named the league’s fifth commissioner since its relaunch in 1997 on Tuesday morning. His first official day on the job is Sept. 1.

“It’s rare in this business where you get to marry professional and personal passions and grow enterprise value,” Frood said. “The National Lacrosse League certainly provides me with that opportunity like nothing else I really could have imagined.”

Frood succeeds Nick Sakiewicz, who steered the NLL from January 1, 2016, until June 30 of this year when he took a position with the NHL’s Arizona Coyotes. Deputy Commissioner Jessica Berman was named interim commissioner following his departure, but left soon after to become commissioner of the National Women’s Soccer League.

“No day was monotonous,” Frood said. “Every day you had to wear different hats. There was commercial mining, there was fan building, there was fiduciary oversight, operational things and event promotion, leveraging our digital exploits. It was never ending, so I’m hopeful the vast experience is impactful.”

As a lacrosse player, Frood was a multi-year starter, Final Four member and two-time Ivy League champion. A former attackman and midfielder, he led Brown in scoring as a senior.

“Brett is everything we were looking for,” Toronto Rock owner Jamie Dawick said in a statement. “He brings an amazing track record of business success [and] a passion and deep understanding of lacrosse. He will be the perfect leader for the NLL.”

While Frood is still getting adjusted to his new role, he touched on several topics related to the future of the league.

Expansion was a major priority for Sakiewicz, who grew the NLL from nine teams to 15 in his five and a half years as commissioner. The Las Vegas Desert Dogs are primed to join the fold next season following the additions of Philadelphia, San Diego, Rochester, New York and Panther City. Sakiewicz openly discussed getting the NLL to 22 teams by the end of the decade and 30 by 2035.

In his first public appearance, Frood expressed a more conservative view on the league’s growth.

“I understand the great enthusiasm there’s been around the expansion, and it’s been awesome to see all the different respective locations in North America that have been interested,” Frood said. “I know that enthusiasm and commitment is still there, but I’d say it is a little early for me to say where we go next relative to expansion. While there’s no shortage of interest, I certainly want to focus on servicing the existing teams right now, those markets and those fans. That’s really my first priority. That being said, I certainly see expansion being a strategy at some point in our future.”

From a corporate standpoint, Frood negotiated over $600 million in partnerships while with Stewart-Haas Racing. He’ll look to channel that experience to take the NLL to the next level.

“Our business model really revolves around corporate partnerships and that commercial ecosystem,” Frood said of NASCAR. “It is how we exist. It is how we’re able to sustain in perpetuity from a motorsports standpoint. It’s really figuring out those partners that are meaningful, long-lasting and where you can produce value-laden programs for. As I look for opportunity here, I’m really excited about attacking that commercial side.”

Frood keyed in on the importance of the distribution of the sport, whether that be via television, a streaming service, social media or another outlet. He said the league is working from a positive position thanks to its strong on-field product.

“There’s nothing better in professional sports,” Frood said. “Those games, the competitive level, the athletes out there, the physicality, skill and then ultimately the entertainment value. You saw what was going on in Colorado and Buffalo from a fan experience, and really it is our job to tell that story throughout the year.”

Leading the NLL is not without its challenges. At the forefront currently is the negotiation of a new collective bargaining agreement between the league and the NLL Players’ Association, which forced free agency to be delayed to Aug. 6.

“I’m obviously just getting started and just getting up to speed on those conversations but have no reason to believe there won’t be a resolution soon with the CBA,” Frood said. “I’ve spoken to the committee that’s working on it. I know they’re in the midst of productive dialogue with the players. Obviously, there’s some pretty astute guys on the players’ side in Reid [Reinholdt] and Zach [Currier] that’s leading that.”

At a more macro level, the NLL faces a competitive entertainment market, exacerbated by its season overlapping with the NHL, NBA and NFL.

“How do we make this league a league and sport and an outlet that everybody wants to consume? Because there’s so much going on and everyone is trying to get those eyeballs,” Frood said. “As I look at the next year, it’s a lot of, ‘How do we grow?’”

But Frood is not discouraged. As he put it, it will be really easy jumping out of bed each morning and very difficult to finish working at the end of the night. That’s where the passion helps.

“This league has all the elements one could want in professional sport,” Frood said. “History of amazing competition, champion owners, talented and competitive athletes, media partners in ESPN and TSN that are committed to the growth of the sport, a game that thrives with millennials and diehards, maximum entertainment value, connectivity with the fans and certainly a staff and board and teams that are putting in the time and work to amplify all those pieces.”