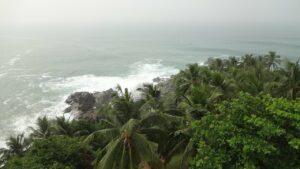 Cape Three Points is the southernmost tip of Ghana. It has a white and red solar powered Lighthouse, built in 1925, the apex of which provides visitors a scenic beauty of the country’s only coastal rainforest reserve, many rolling hills and the Atlantic Ocean.

The rainforest reserve has been extensively studied botanically, with plant collections dating as far back as the 1780s. A recent biological assessment conducted by the Wildlife Division of the Forestry Commission,  and Hen Mpoano, a not-for-profit organisation based in Sekondi-Takoradi, indicates that the area was part of the vast mangroves that house the International Union for Conservation of Nature (IUCN) list of critically endangered species such as turtle, gray parrot, crocodiles, colobus, and monkeys.

Cape Three Points radiates rich heritage, which recently has been designated as a Key Biodiversity Area – a site globally recognised for housing unique plants and animals. Besides its rich history, one can learn about the distance in nautical miles from that point to cities including New York, Las Palmas, Sydney, Tokyo, London, North Pole and Rome.

With a population of about 600 residents, economically, it is the landmark point of the country’s oil discovery.

In spite of the significance of this town, it is a despicable spectacle as both young and old take turns to respond to nature’s call at the habitat of sea foods such as crabs, prawns, herring, anchovies, snappers and groupers populate. These fish species are a source of livelihood for the community members.

Mr Kofi Yanzu, the Clan Head (Ebusuapanyin) of Cape Three Points, told the Ghana News Agency (GNA) that a non-governmental organisation began building two public toilets about four years ago but the project had stalled, for reasons unknown to the community.

“We lack critical social amenities such as a waste disposal facility so we are forced to dump our garbage at that site. Our town is mostly cut-off anytime it rains heavily making our roads unmotorable,” he noted.

Maame Akuba, a middle-aged woman who was returning home after engaging in open defecation, appealed to philanthropists to go to their aid by constructing a toilet facility for them.

The story of the Cape Three Points is not different from other communities along Ghana’s 550-kilometer coastal line that have mangroves. Mangroves provides livelihoods for some three million Ghanaians. West Africa has about 13 per cent of degraded mangrove forests, covering more than 2.4 million hectares in 19 countries, including Ghana.

Dr Andrews Agyekumhene, a mangrove expert of the Department of Marine and Fisheries Sciences, University of Ghana, explained that the waste materials reduced the quality of the water and its oxygen level, making it uninhabitable for these precious species.

“The water becomes heavily polluted, unhealthy and the whole environment becomes unconducive for biodiversity, especially fish to live and lay eggs. Just as humans are unable to withstand insanitary conditions and fall ill, so do fishes feel.”

He said mangroves provided shelter, feeding grounds and spawning areas for many species of fish from freshwater and marine origin, enabling them to reproduce and avoid predation. The roots of mangroves also trapped fine particles, creating soft soils ideal for molluscs and crustaceans to burrow.

For the health of the planet, mangroves play a vital role in climate change mitigation and adaptation through carbon sequestration at rates higher than terrestrial forest systems, a buffer against shoreline erosion, protection against extreme weather events through absorption and dispersion of tidal surges, and groundwater recharge.

Mr Dickson Yaw Agyeman, the Operations Manager at the Wildlife Division, Forestry Commission, speaking to the GNA during a learning tour, organised by the IUCN and the Media Platform for Environment and Climate Change (MPEG), described the loss of mangroves due to human activities as “a crisis and a crime.”

He says pollutants discharge harmful substances and are detrimental to the development of  mangroves and other aquatic species.

“They are so close that if we do not change our behaviour it will have a dire consequence. This need to stop,” he said.

“The sheet of plastic spread under the mangroves does not allow natural regeneration of mangrove seeds. When a seed drops on plastic it cannot grow. That is why the rate of regeneration is so slow.”

There has been a reduction in Ghana’s mangrove cover from 137 to its current estimated area of 72.4 kilometer square between 2006 and 2014, according to a study led by Dr Francis E. K. Nunoo at the Marine and Fisheries Sciences Department, University of Ghana.

The shrinking mangrove, the study found, was one of the major reasons the fisheries resources were depleting in the country.

There is no broad legislation to protect mangroves in Ghana despite the fact that it is one of the world’s most threatened ecosystems.

According to the Environmental Protection Agency the draft bill is still being worked on and could not project when it will be ready.

In 2019, the Sustainable Fisheries Management research revealed that despite increasing fishing effort by the artisanal fishing fleet in Ghana’s waters, small pelagic fish catch had fallen by over 85 per cent, from the peak in reported landings of 138,955 metric tonnes in 1996.

The researchers blamed climate change and other man-made activities such as illegal fishing as major causes of the decline in pelagic fish stock in the country’s waters.

Stakeholders including A Rocha Ghana, IUCN, Hen Mpoano, and the Netherlands Development Organisation, over the years, have undertaken restoration activities at the sites aimed at contributing to the Sustainable Development Goal 14 – conserving life below water, which over three billion people depend on for their livelihood.

One of the concerns of Mr Nortey is the slow pace of enacting a law to promote and secure the sustainable development of beaches, mangroves, lagoons, and estuaries, among other important coastal resources.

He called for more collaboration among government agencies and a clarity of their mandates to avoid duplication, as well as the need for local authorities to take action.

Aggressive sensitisation of all and sundry, especially decision- makers, on the dangers associated with mangrove degradation and the multimillion-dollar carbon trading potential, will be enough motivation not only to settle for a biodiversity rich coastal communities but also liberate those communities from the shackles of offensive stench.