HONG LEONG INVESTMENT BANK RESEARCH (AUG 16): Netflix Inc’s losses of 200,000 and 970,000 subscribers in 1Q22 and 2Q22 respectively was the group’s inflection point, stoking concerns about stagnating growth and possibly the beginning of a declining trend, resulting in its share price falling 61.5% year to date. This is markedly similar to Astro’s case — both its subscription and advertising revenue saw marked y-o-y declines in its 3QFY18 results.

The decline in subscription revenue since FY18 has been due to (i) the proliferation of illegal TV boxes, which allow users to stream paid content for free; (ii) increased competition from Unifi TV bundled with other Telekom Malaysia (TM) services; (iii) competition from other streaming services; (iv) lower household income and operating restrictions caused by the pandemic leading to declining household subscription; and (v) social restrictions during the pandemic, which negatively impacted commercial subscription. 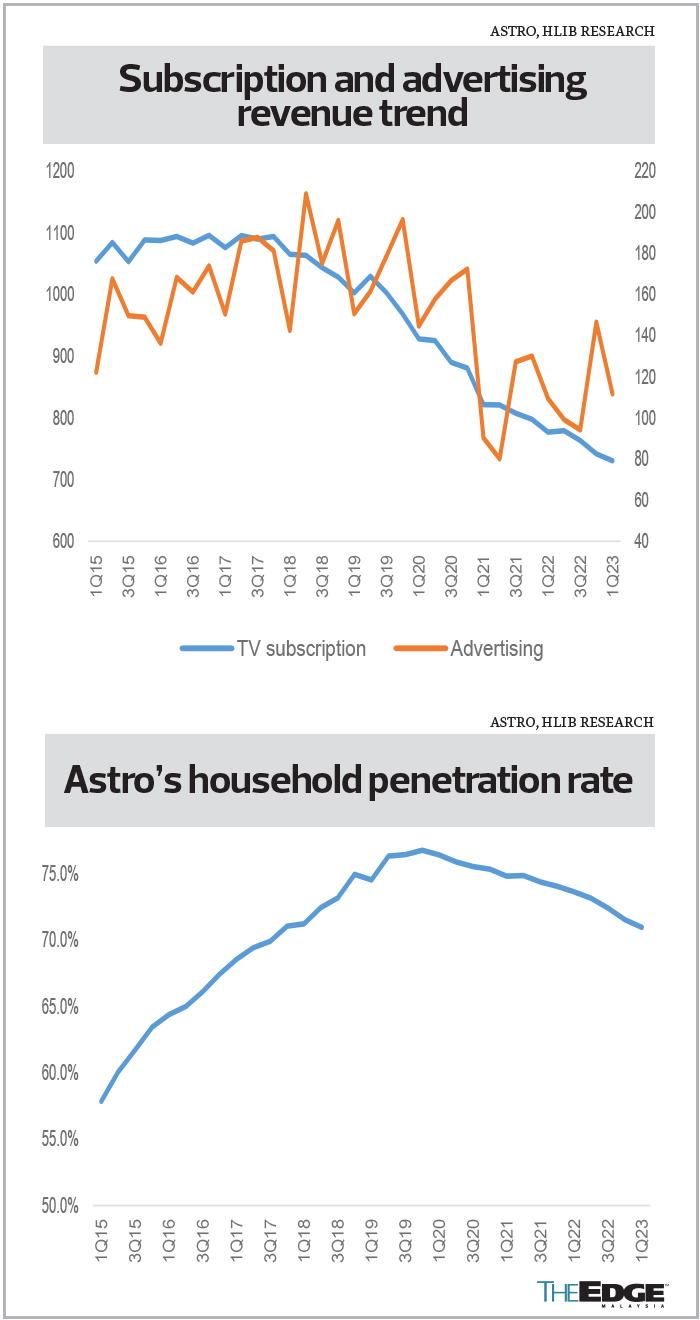 However, there have been some key developments that we believe will help turn things around for Astro. The Copyright (Amendment) Act 2022 will help reduce the number of illegal TV boxes being used and sold as it will allow Astro to take legal action against TV box sellers and those illegally distributing its content. Other than that, the company will be able to deal with the increased competition from Unifi TV and other streaming services by launching its own fibre broadband service and becoming a streaming service aggregator respectively.

With the launch of its broadband service, Astro will be able to provide a value proposition that is similar to TM’s by offering its customers one-bill convenience and additional cost savings from bundles. Instead of directly competing with streaming services for viewership, Astro has pivoted its strategy to become a streaming service aggregator and provide more value in its content bundles.

With decent downside share price support from its attractive dividend yield (8.7%) and improving long-term prospects for the company, we believe the stock is a compelling investment case. Maintain “buy” with an unchanged target price of RM1.34. 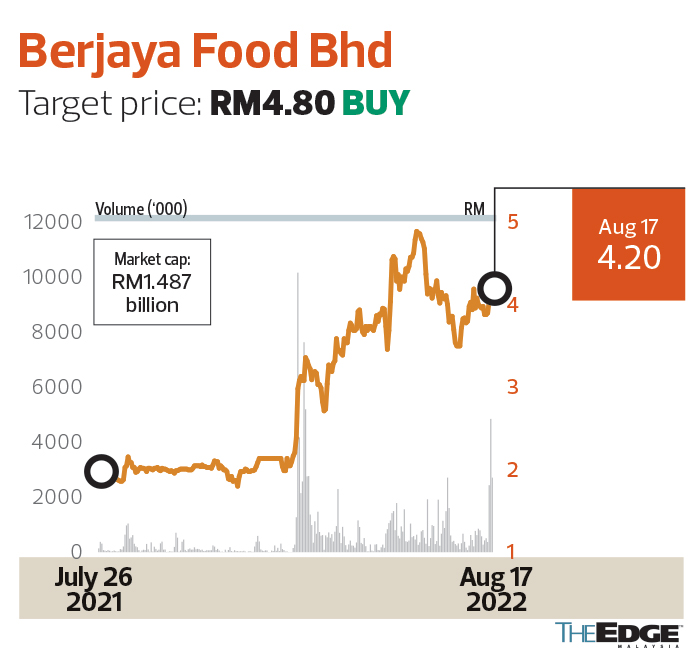 RHB INVESTMENT BANK (AUG 17): BFood reported an FY22 core profit of RM126 million (+134% y-o-y), coming in well above our and consensus’ full-year forecasts. FY22 revenue jumped 39.1% y-o-y, owing to healthy same-store-sales growth (SSSG) across its brands due to better consumer confidence post-pandemic and contributions from the 29 newly opened Starbucks outlets during the year — leading to an earnings growth of 134%.

With 424 stores — Starbucks: 356; Kenny Rogers Roasters (KRR): 68 — as at FY22, BFood targets to open 35 to 40 Starbucks outlets and four to six KRR stores in FY23. Nearly half (40% to 45%) of the Starbucks outlets will be in the drive-through format, which should bode well for the group as we gather that sales performance for this store format has been strong (at about 30% of total revenue). The brand’s already entrenched network also points to the likelihood that expansions will be into less-urban areas, which could contribute to sustainable improvement in sales moving forward.

We expect a normalisation in earnings for FY23 as we believe earnings have peaked. Our target price is unchanged at RM4.80, which implies an FY23 PER of 18 times. 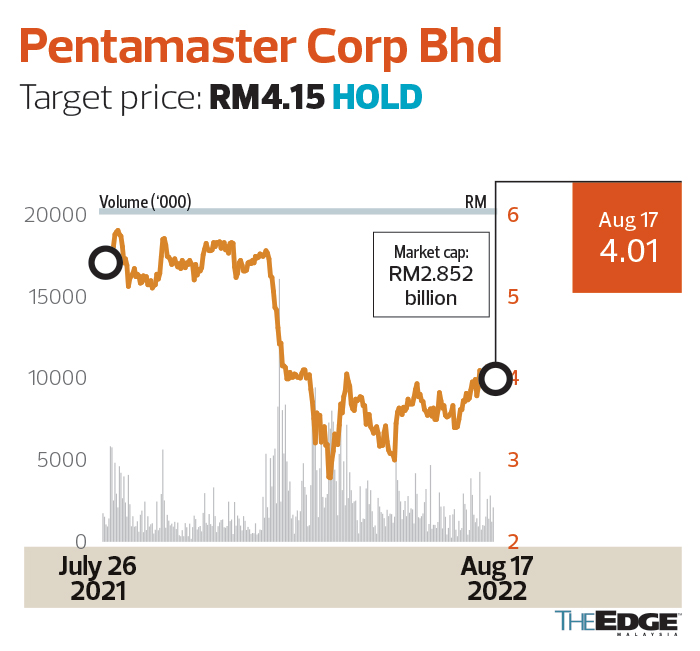 The group is investing US$6.8 million in Taiwan-based Everready Precision Industrial Corp (EPIC) via 29.9% equity subscription. The group highlighted that its investment in EPIC would provide synergistic opportunities to penetrate China’s optical sensing market and leverage EPIC’s existing partnerships in China.

In addition, Pentamaster is acquiring a 6.8% equity stake in smart automated warehouse solution provider Pingspace for RM5 million. We see the investment as expediting the commercialisation of its warehouse automation solution and providing better access to talent and technology capabilities in software application. While we like the group’s strategy to expand its product portfolio, we do not expect to see a meaningful earnings contribution from EPIC and Pingspace over the next 12 months. 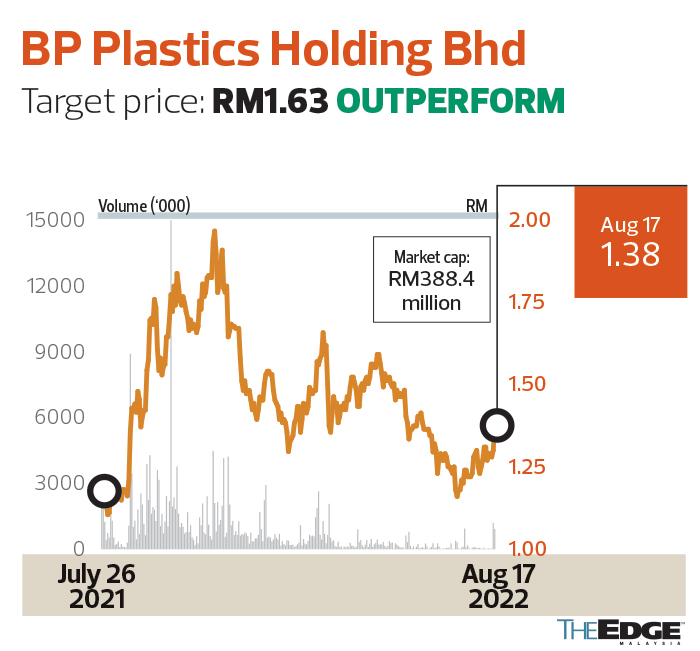 KENANGA INVESTMENT BANK RESEARCH (AUG 16): BP Plastics’ top line has thus far been spared the demand and labour issues, as manifested in its stable utilisation rate at an average of 65% to 70%. Over the immediate term, its growth will be driven by the commissioning of its 10th cast stretch film line in 4QCY22, and it is confident that the line will be fully utilised in FY23.

It has also earmarked co-extrusion blown film lines to strengthen the production of food packaging and shipping and logistics packaging film. Meanwhile, its average selling prices (ASPs) are likely to be sticky to the downside despite resin prices having softened about 10% to 12% year to date, resulting in better margins, although temporarily.

We roll forward our valuation base year to FY23 to better reflect its growth potential driven by: (i) capacity expansion, which increases the capacity of premium products that fetch better margins, and (ii) sustainable demand. Our target price is raised 24% to RM1.63 based on an FY23 PER of nine times, a slight discount to peers’ average forward PER of 9.3 times, largely to reflect BP Plastics’ relatively smaller market cap and thin share liquidity. Upgrade rating to “outperform” from “market perform”.