Falling prices of all five volume commodity resins was the trend going into the second half of the third quarter, and it appeared that could continue to the latter half, barring any major production disruptions such as from a hurricane. Among the driving factors were low demand due to the slowed economy, more than ample supplier inventories in some cases, a drop in exports, and lower feedstock costs. Imports have become more competitive as prices abroad dropped, as have freight costs, in the case for PVC and PET.

Polyethylene prices in June were flat and were poised to drop around 3¢/lb in July, erasing the May 3¢ increase. At least one major supplier rescinded its 3¢/lb July price hike, but PE suppliers were still scheduling a 5¢/lb increase for August, according to David Barry, PCW’s associate director for PE, PP, and PS, as well as Robin Chesshier, RTi’s v.p. of PE, PS, and nylon 6 markets, and The Plastic Exchange’s Michael Greenberg. Barry ventured that August could “easily” see another 4¢/lb drop, barring a major production disruption, and PE tabs in September would likely be flat to down.

Suppliers maintained that their August hike was based on predictions of higher hurricane activity this season. Meanwhile, both domestic and export demand started to slow, following healthy demand through the first two quarters. Operating rates fell in June, but inventories still grew by an estimated 110 million lb, he noted, characterizing the market as balanced to long, partly due to continued shipping and railway logistical issues. Noting that processors are in a buy-as-needed mode, as they have inventories of both resin and finished goods on hand, plus weak global demand and the impact of new resin capacity, RTi’s Chesshier saw potential for further price erosion, barring a disruptive event. 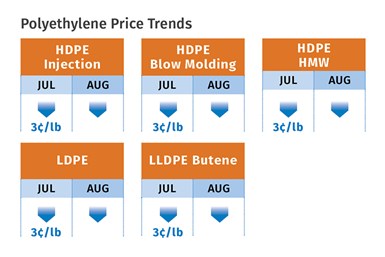 Greenberg reported that spot prices continued to drop, while demand was lackluster as buyers anticipated further price declines. He said “slugs” of material were sold at deep discounts into the Houston export market to reduce producers’ bulging inventories. The continued drop in spot pricing also comes ahead of another round of warehouse storage-rate increases, which provides resin suppliers additional incentive to reduce stockpiles.

Polypropylene prices in July were poised to drop by 3¢/lb in step with propylene monomer, amplified by a 3¢/lb non-monomer decrease, wiping  out suppliers’ May 3¢/lb margin increase,  according to PCW’s Barry, Spartan Polymers’ Newell, and The Plastic Exchange’s Greenberg. Noting that monomer prices were likely to stabilize, Newell ventured that barring a hurricane event, there is potential for further non-monomer PP price erosion in August and September.

Spot PP prices continued to drop, according to both Barry and Greenberg. Barry attributed this to both destocking and slower consumer demand for durable goods such as power tools, storage bins and recreational vehicles. He also cited  lack of attractive export options, as well as capacity additions by Heartland Polymers and ExxonMobil. Greenberg reported, “The expected drop in July contract prices lines up with predictions of a slow second half due to stacked supplies and weak buyer demand.” 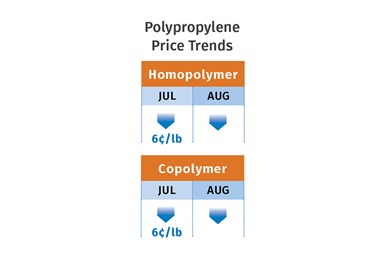 Newell noted that PP demand in June was up 4%, production rates had been throttled back to the high 70s, and days of supply dropped from 36.1 to 34.1 (37 to 40 days is considered oversupply). But he said, “I think this higher demand number was an anomaly, reflecting a group of buyers who had too much resin and finished goods prior to June, and were barely buying, who then had to stock up.” Going into August, he characterized the negative market sentiment as worse than ever.

Polystyrene prices in July were poised to move up by a whopping 20¢/lb, having moved up a total of 27¢/lb in the four previous months, but a turnaround was underway, according to both PCW’s Barry and RTi’s Chesshier. Barry ventured that August would bring about a major correction, on the order of about 24¢/lb, noting that while July benzene contracts had settled at $6.80/gal, spot benzene prices had dropped to $4.10/gal. He expected a flat-to-lower trajectory for PS in September, barring a major supply disruption.

Chesshier reported that at least one major supplier already had announced a drop of 15¢/lb in PS prices for August. “Suppliers will aim to hold onto some of their margins. Benzene came crashing down, with August contracts dropping to $4.52/gal from July’s $6.82/gal.” She noted that in step with the benzene trajectory, suppliers should be giving back 22¢/lb. Barring a major disruptive event, she saw potential for further price erosion in August-September if benzene prices and demand continue to drop. 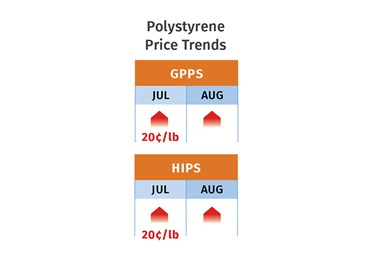 Barry noted that suppliers’s had throttled back production rates to meet lower demand. He did note that processors were delaying orders where possible, but not outside of expected levels, as supply constraints during the second quarter had prevented many from building inventories.

Barry also noted that the implied styrene cost based on a 30/70 formula of spot ethylene/benzene was down 1¢ to 53¢/lb in late July, having peaked over five weeks prior at 76.7¢/lb. He also reported that there were few signs of spot activity, but PS spot prices were not up by the full 20¢/lb prime market increase.

PVC prices were poised to drop 3¢ to 5¢/lb in July, having held even in the previous two months. Further decline in August-September, barring a major supply disruption as from a hurricane, also appeared to be in the offing, according to both Mark Kallman, RTi’s v.p. of PVC and engineering resins and PCW senior editor Donna Todd.

Multiple industry factors are driving the downtrend, including a 40% drop in export prices, slowed demand driven by fewer housing starts and other economic factors, a drop in production rates to the high 70% range, high supplier inventory levels, and competitive PVC imports from Asia as prices there have dropped, as have freight costs, according to RTi’s Kallman. He ventured that August and September could each see further reductions in the 2-3¢/lb range. 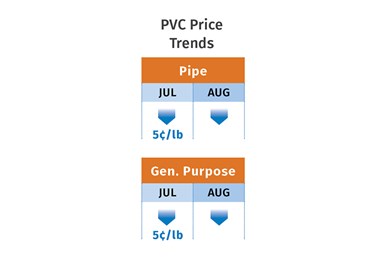 “Export prices stood at $1700-1750/metric ton FAS Houston during the week ending May 20. By the end of the third week in July, the price range was $900-1000/mt FAS Houston, breaking the psychological barrier of $1000/mt.” As a result, she reported that resin producers and traders with inventory were willing to cut deals with lower prices. “One consequence of the rapidly eroding export prices was that a market pundit changed its prediction that July domestic PVC prices would drop by 3¢/lb to a reduction of 5¢/lb, with August and September forecast to drop 3¢/lb (rather than 2¢/lb) each.”

PET Prices Up, Then Drop

PET prices in June moved up as had been expected 12¢ to 14¢/lb, after rising 9¢/lb in May, primarily reflecting higher-priced feedstock paraxylene used to produce PTA and its diversion to gasoline production, according to RTi’s Kallman. However, month-end July prices were expected to show a drop of about 10¢/lb, reflecting a turnaround in paraxylene prices as we approach the end of driving season. 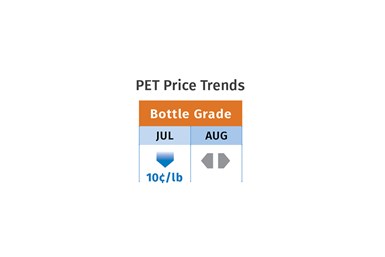 Going into August, he characterized demand as still strong, with both production rates and imports at high levels, translating into a well-supplied market.