National Strategy for the Environment launched for consultation

Cleaner air quality, zero waste, thriving biodiversity, flourishing seas – these are among the goals Malta has to reach by 2050 according to the National Strategy for the Environment 2050 launched for public consultation on Wednesday.

The strategy builds on eight strategic goals, which tackle traditional environmental facets while focusing on key environmental challenges. It lays down the roadmap to enable and empower the changes needed to support an environmental transformation over a generation. 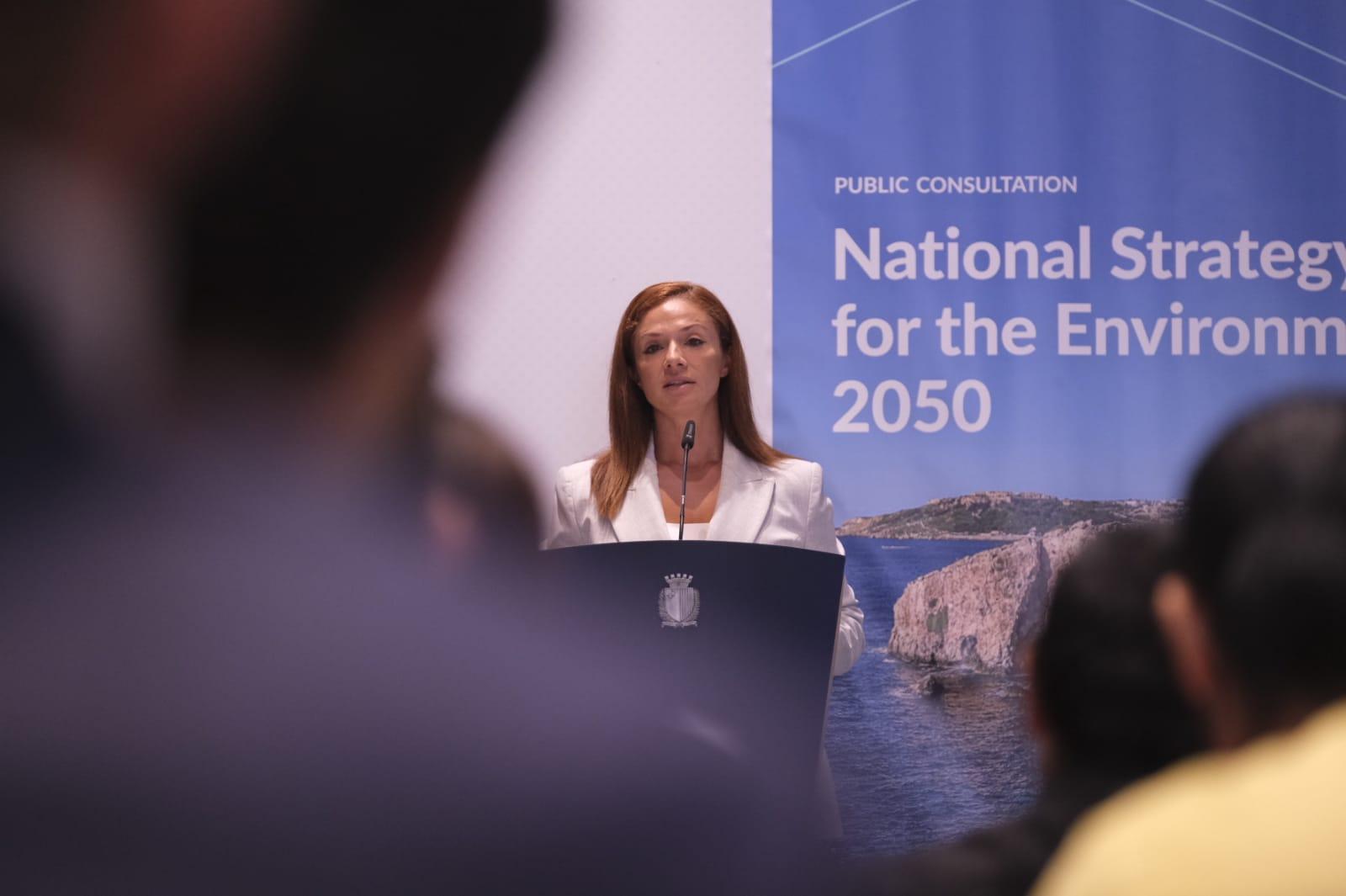 Speaking during the launch of the strategy’s consultation period, Environment Minister Miriam Dalli said all stakeholders, including the public, had to work together to pull the same rope for a better future for future generations.

She called on members of the public to give their views on the matter as this was a subject that required everyone’s participation.

The National Strategy for the Environment 2050 has been developed in consultation and collaboration with several stakeholders. A panel composed of representatives from different sectors, such as policymaking, academia, the business community and voluntary sector, was set up to contribute to the development of the strategy that consists of eight main goals: 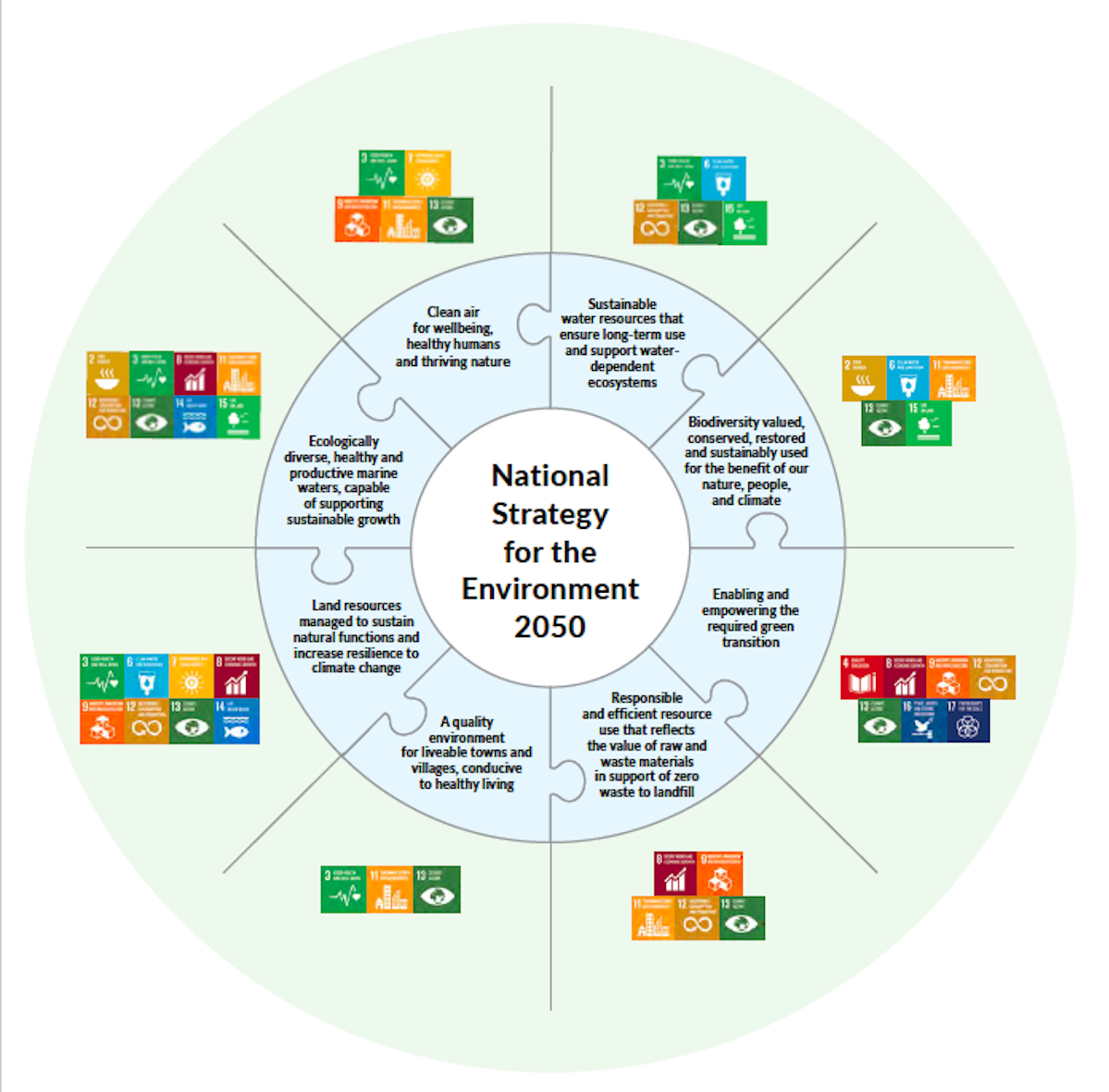 How? Air pollutant levels will respect air quality target levels set for the protection of human health and vegetation. A modal shift towards cleaner alternatives to private car use will be enabled, while the need to travel will be reduced.

Why? As of 2020, Malta has an estimated population of 516,100, the vast majority of whom reside in Malta’s urban agglomeration.  402,427 licensed motor vehicles were registered by the end of 2020. 91.4% of citizens are highly or very highly concerned about urban issues, such as traffic congestion and green open spaces. This emphasises the need to improve the quality of the environment in Malta’s neighbourhoods for human health and wellbeing.

How? Air, noise and light pollution in towns and villages will be reduced. Waste management in neighbourhoods will be improved. Ecosystem services provided by urban greening will be ensured. More open and green spaces and the safeguarding of the existing ones. 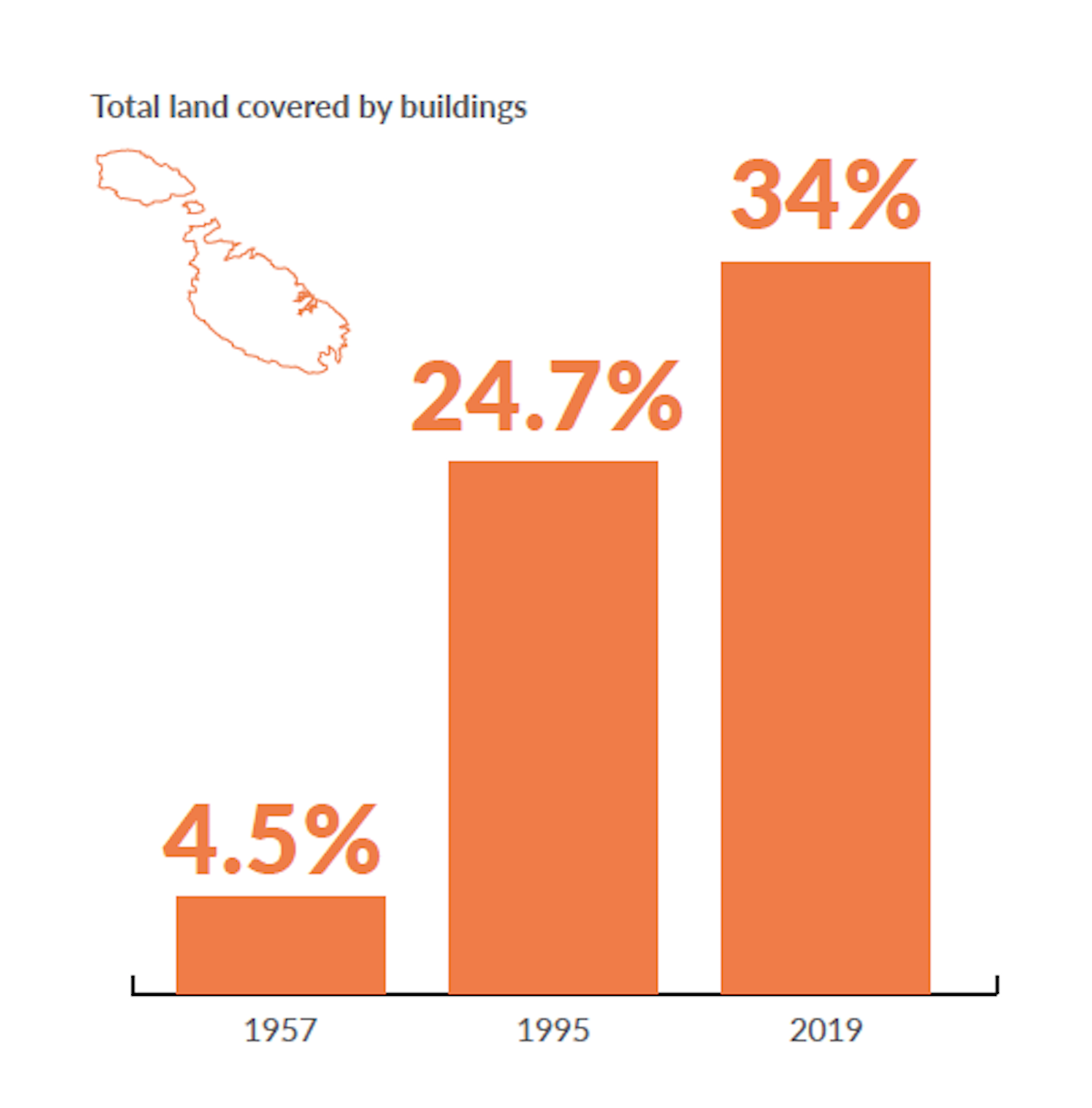 Why? 93% of Maltese citizens agree that it is important to protect biodiversity. Nature is the foundation of our health and well-being, contributing to people’s physical health and mental resilience. It is increasingly being recognised that the survival of the human species is intrinsically bound to the health of ecosystems.

How? The conservation status of key habitats and species will improve. The ecosystem coverage will be maintained and its condition improved.

Why? 62.2% of Maltese citizens are highly concerned about waste management issues. Waste generation per capita in Malta is among the highest in Europe. In 2019, over 2.6 billion kilograms of waste was generated, including municipal solid waste and construction and demolition waste, the latter being the largest contributor by mass and becoming increasingly difficult to manage due to limited void space for its recovery.

How?  Waste generation will be reduced to move towards a circular economy. The proportion of waste being prepared for reuse or recycling will increase. The country will move towards zero waste to landfill.

Why? Due to the country’s high population density, including tourism, and the small size of the island, Malta is poor in terms of land resources per capita. More than three-quarters of the people in Malta (76.2%) are highly concerned about the development of rural or natural land for buildings. This is probably attributed to the demand for land take-up for residential and economic activity over the past sixty years. In 1957, approximately 4.5% of the land was covered by buildings. This increased up to 24.7% in 1995 and 34% in 2019. This influences well-being in many ways.

How? Land resources will be safeguarded. Ecosystem health and integrated and sustainable management of water resources, agriculture and the landscape will be ensured.

Why? 76.3% of citizens are highly concerned about marine issues, specifically water pollution, likely reflecting the importance of the sea for national leisure and recreation. As an island state with a marine area much larger than the land area, the marine environment is of high national importance, and it is in the best interest of everyone that the sea is safeguarded. Apart from its environmental importance, the ecosystem services provided by the marine environment area is a significant contributor to Malta’s economy, due to sectors it supports such as tourism, shipping, fisheries and energy and water production. Furthermore, maritime culture is fundamental to the Maltese identity.

How? Coastal and marine waters will be in a good environmental and ecological status. Marine ecosystems will be fully functional in terms of healthy food webs that ensure the long-term abundance of marine biodiversity. 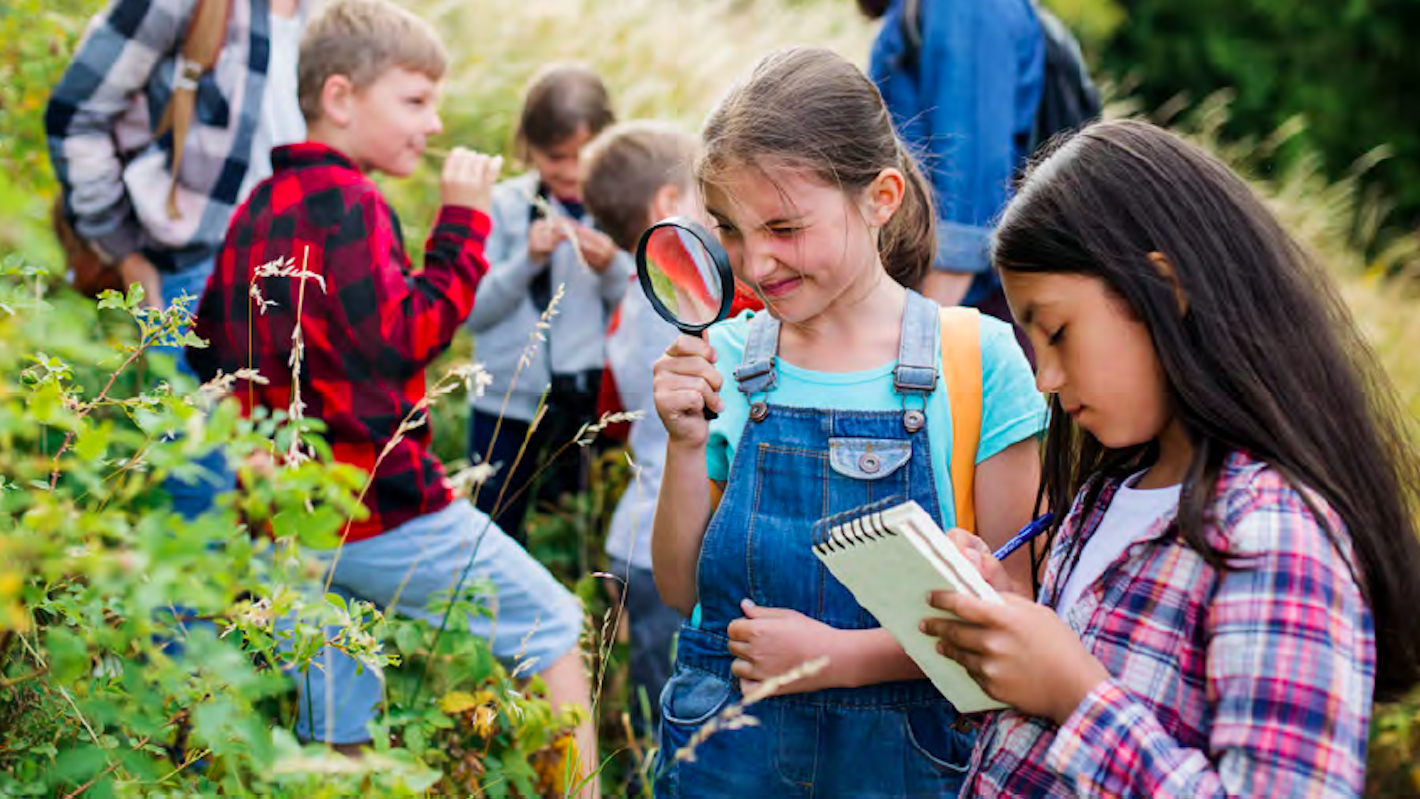 Why? 61.1% of citizens are highly concerned about the state of freshwater in Malta, specifically about freshwater pollution. Malta’s limited freshwater resources consist of groundwater bodies and surface freshwater bodies, including wetlands and intermittent and ephemeral watercourses. Freshwater resources are of vital importance, including for drinking and municipal supply, irrigation and certain industrial processes, as well as to sustain habitats of high conservation importance. Malta has the lowest natural freshwater availability per capita in the EU, due to its semi-arid climate and high population density.

How? Groundwater and inland surface water bodies will have a good chemical and ecological status and a good quantitative status. The flows and interlinkages of the freshwater network will be fully understood and functional.

Why? For any transition to occur, specific enabling conditions are required. Historically, Malta adopted legislation to protect resources such as trees, soil and wildlife. Different enabling tools and instruments that support the established aims of environmental legislation are necessary to enable different sectors of society to contribute to the green transition. These could range from policy to fiscal measures, education, research and a series of other tools.

How? A behavioural change in the cultural mindsets of society will be enabled through effective communication, education and public awareness. Joined-up governance will be promoted and supported. Green upskilling, reskilling, multi-skilling, and the possibility of enhancing transferable skills in the workforce will be pursued. Success will be determined on the basis of quality of life and well-being, besides economic growth.

The public can participate by sending their feedback here by October 21.

Independent journalism costs money. Support Times of Malta for the price of a coffee.