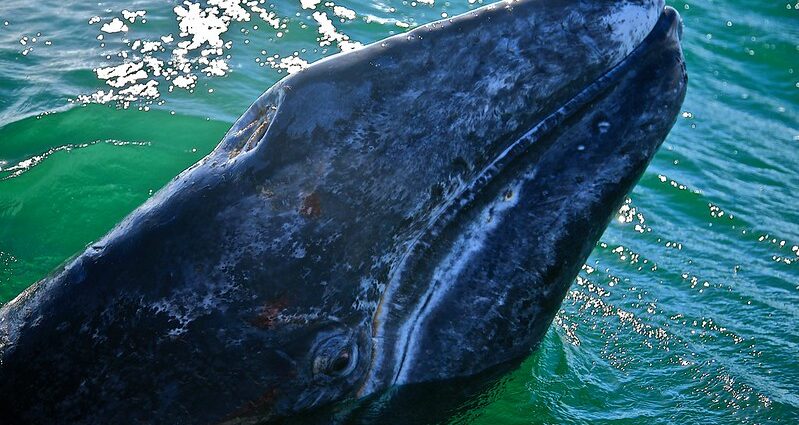 You cannot deliberately feed plastic to a whale, even in the name of science.

So researchers at the Seattle Aquarium created a clever alternative. They’ve designed a simulated gray whale stomach in order to test plastic alternatives that claim to be marine safe. They’re eager to know what might happen to plant-based plastics if eaten by whales or other sea life — and they know that whales are a smart way to draw attention to the planet’s massive plastic problem.

“When you talk about whales, everyone’s ears perk up,” said Dr. Lyda Harris, a research scientist with the aquarium, who is helping lead the effort.

The project is part of the Tom Ford Plastic Innovation Prize, an international contest to discover and promote environmentally friendly alternatives to single use plastic film used to make items such as produce and dry cleaning bags. People use 300 billion of these bags annually, and they comprise almost half of the plastic trash in the ocean, according to prize organizers. Only 5% of plastic is recycled in the U.S.

And the situation is only getting worse.

“Plastics in our oceans are predicted to outweigh all the fish by 2050,” said Kelley Dennings, a campaigner with the Center for Biological Diversity, a U.S. nonprofit not affiliated with the contest. “It is a crisis. We are in crisis mode.”

Conventional plastics made from petrochemicals don’t biodegrade. Instead they break up into microplastics that persist in oceans and elsewhere in the environment. The plastics are eaten by marine life and can harm their digestion, sometimes killing them, experts say. The microplastics accumulate in organisms like shellfish and fish, and can ultimately reach people who eat the seafood. The plastic trash can become contaminated with toxic chemicals, causing further damage to organisms that eat it.

The Tom Ford contest judges selected eight finalists for in-the-field testing. The companies are from the U.S., Canada, United Kingdom, Iceland, Kenya and India. Their alternatives are made from sources including seaweed, algae, peas and organic waste.

The goal is to find products that work well as films, and that also decompose safely in the environment.

“This whole project is excellent,” Harris said, “and it gets at a really, really needed part of marine pollution.”

The aquarium is putting the materials through a battery of tests in Puget Sound and the lab.

On a recent visit to the seaside aquarium, Harris and research technician Megan Williams were pulling some of the plastic samples out of the chilly waters of Puget Sound.

The plastic had spent four months in the water inside nylon mesh bags, some near the surface and others at a depth of 30 feet. The bags and testing gear at the shallow depth were coated in seaweed, mussels, and barnacles. Tiny crabs, worms, and shrimp wriggled madly as the researchers untied the bags for analysis and further testing of the samples.

At both depths, the alternative plastics had largely already dissolved and the bags were mostly empty except for control samples of conventional plastic. The researchers also glued tiny particles of the plastics to slides to see if they would persist or decompose.

The researchers had pulled out samples at earlier time points, as well, retrieving them every week during the first two months of the study. The experiment will run eight months, ending in December.

The New Materials Institute at the University of Georgia is conducting related research for the contest in the warm waters of the Caribbean.

The Seattle Aquarium scientists are unique for their whale gut research. They’re testing alternative plastics that were not exposed to marine water — mimicking a scenario where the plastic is consumed shortly after entering the environment — as well as those that have been submerged for four and eight months.

The simulation is based on a cow stomach. As it turns out, whales and cows have similar digestive systems with multiple stomachs and they share some of the same gut bacteria or microbiomes.

The samples spend 24 hours in a glass beaker that serves as a faux whale belly where they’re exposed to warm, acidic conditions, digestive enzymes and agitation. Then the plastics are examined to determine if they decomposed, retained their strength, or degraded into hormone disrupting chemicals.

The winners of the contest will be selected next spring. Tom Ford, a luxury fashion brand, has recruited a coalition of companies that have agreed to test the finalists’ materials in their own supply chains. The list includes Tom Ford, Nike, HP, J. Crew, MillerKnoll furniture brands, a food packaging company, and others. The nonprofit Lonely Whale is a partner on the project.

Environmental organizations cautioned that, while safer plastic alternatives are great, a better solution ecologically is to reduce the consumption of single use products in favor of more durable, reusable goods and packaging.

In the meantime, they agreed, the effort by the aquarium and Tom Ford makes sense.

“We’re still facing a lot of barriers on the reuse side,” said Blair Englebrecht, policy and boating programs manager for the nonprofit Puget Soundkeeper Alliance.

“People like to consume things,” she said. “If we can make them out of something that isn’t plastic, that is very important.”