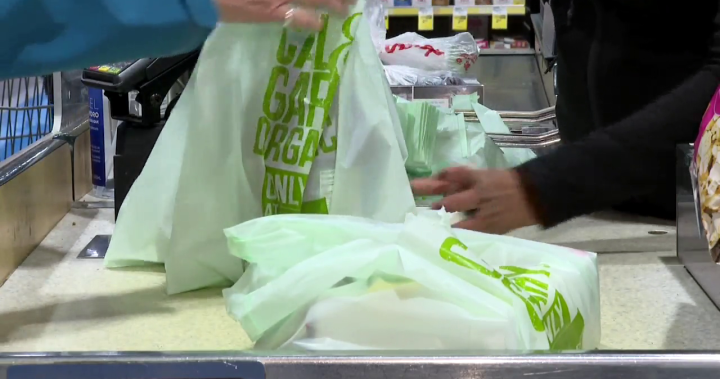 A Calgary grocery chain is asking the federal government to issue an exemption for its “extremely popular” compostable shopping bag.

The federal government announced its single-use plastic ban on June 20, part of a plan to eliminate plastic waste in Canada. Retailers like grocery stores will have until Dec. 20, 2023, to cease selling plastic shopping bags at check outs.

A statement from Environment and Climate Change Canada (ECCC) said the new regulations around single-use plastics applies to both conventional and unconventional plastics, like biobased, compostable and biodegradable plastics.

“We worked with the City of Calgary on the development of these bags and the city has the equipment to fully break down these bags, making them a great alternative for our members along with the fact that they can be used as part of the city’s Green Cart program. All we are asking is for the federal government to review this decision regarding the inclusion of our compostable bags in their single-use plastics ban,” Ken Keelor, Calgary Co-op CEO, said in a statement.

A recent call with ECCC revealed the grocer can sell its compostable bags in bundles off the shelf and are planning to do that. But the Calgary-area grocer cannot provide them individually at checkouts – Keelor said ECCC was “targeting checkouts.”

4:42
Tips and tricks for reducing waste during Plastic Free July

“I have many friends and family I know of across Calgary Co-op and beyond that use these as bin liners as every day,” Keelor told Global News.

“Plastic bags and so called “bio-degradable bags” continue to be our greatest challenge at the Calgary Composting Facility. Plastic bags interfere with the composting process​ and break down into small pieces of plastic that will contaminate the finished compost,” Sharon Howland with Calgary’s waste and recycling services said in a statement.

Keelor acknowledged the composting facilities in some municipalities might not be able to break down the grocer’s compostable bags.

“The city of Calgary has confirmed repeatedly, and recently, that our bags do break down in their facilities with their processes. So it could be that Calgary Co-op is an exception – we haven’t seen a lot of grocers across the country using the composable bags and we’ve chosen not to go with things like paper bags.”

Dec. 20 marks the last day single-use plastic items like checkout bags, cutlery and food-service items, stir sticks and straws will be allowed to be manufactured or imported to Canada for sale. Companies will have another year until the sale of those items in Canada is prohibited. In December 2025, manufacture, import and sale for export of those same items will be prohibited.

Plastic items are considered single-use if they are designed to be discarded after being used once.

Certain types of bags are not prohibited by the federal regulations, including garbage bags headed to landfill or incineration, produce bags, dry cleaning bags or bags for compost.

A written statement from ECCC said compostable, biodegradable and biobased plastics help reduce carbon dioxide release, but “these plastics are currently problematic to manage at their end of life.

“For example, compostable plastics are currently screened out by most organics recycling facilities and sent to landfill, due to longer biodegradation times than food and yard waste; they contaminate recycling streams; and they have not proven to perform better than conventional plastics when littered on land or in water,” the statement read.

Will banning single-use plastics impact our health? Here’s what we know

ECCC also pointed out the lack of standardized definition of “compostable” for plastic products.

The Government of Canada’s 2020 Science Assessment of Plastic Pollution said there’s a “lack of significant evidence that biodegradable, compostable, biobased, and oxo-degradable plastics will fully degrade in natural environments.”

A 2019 study compared the rates of decay of compostable, biodegradable and plastic bags in sunlight, underground and in seawater.

“Collectively, our results showed that none of the bags could be relied upon to show any substantial deterioration over a 3 year period in all of the environments,” the study said.

The City of Calgary encourages Calgarians to only use certified compostable bags in green carts, and to recycle plastic bags by bundling them together in a tied-off single plastic bag placed in blue carts.