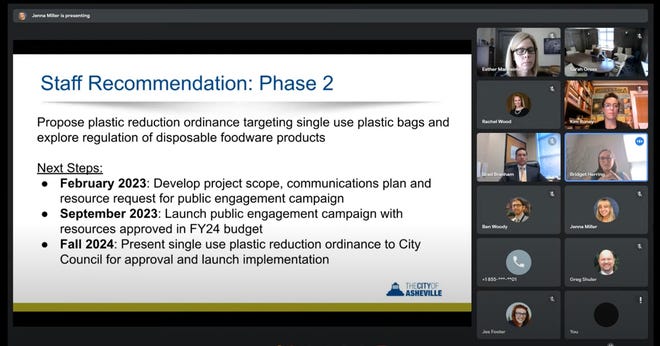 ASHEVILLE – Amid calls to ban all single-use plastic bags in the city, an Asheville City Council committee voted on a gentler approach — one that would potentially eliminate the use of plastic bags for curbside litter collection, and begin to explore an outright ban of plastic shopping bags at point of sale.

At its Sept. 13 meeting, the Governance Committee voted 3-0 to recommend a phased approach to council to update the existing ordinance for leaf litter collection and begin developing a new ordinance to target single-use plastic bags.

Final say rests with the entire City Council, which will discuss the recommendations Sept. 27.

In other news:New Asheville reparations project launches to do what city, county ‘might not be able to’

Much of the conversation surrounded the timeline — with some conservationists urging the city to consider a quicker process.

If the city were to develop a new ordinance for a citywide ban, Bridget Herring, the city’s sustainability director, estimated a 12-month process to formulate a recommendation, and implement a plan and budget for the ordinance based on public input.

Another 12 months was included between ordinance adoption and enforcement.

Herring anticipated a single-use plastic ordinance could be presented to the city for approval and launch in fall 2024.

Manheimer also said she was eager to see a faster timeline, and asked how the city could partner with community agencies to expedite community engagement.

Herring said limited staff capacity and a number of other work priorities in the department were responsible for the length of the project.

Wisler voiced an interest in seeing more public engagement done, particularly with large box stores that stand to be impacted, “so that we are comfortable, in the end, that we have reached our full community.”

The proposed ordinance that came to the Governance Committee for discussion was presented to the Sustainability Advisory Committee on Energy and the Environment in May by MountainTrue, an Asheville-based conservation nonprofit.

In July, SACEE voted 5-2 to recommend adoption of the ordinance, which would ban use of plastic shopping bags and Styrofoam containers by restaurants, grocery stores and retailers.

Though prior iterations included language that would require businesses to charge a 10-cent fee for paper bags, the ordinance passed SACEE with the 10-cent fee made optional.

While noting the importance of getting public input, she said what has already done by local environmental agencies shouldn’t be ignored.

“We would please ask for a more aggressive timeline,” Alsobrook said.

Also in July, SACEE voted unanimously to support a revision to an existing ordinance prohibiting the use of plastic bags for curbside leaf collection. The city considers this change “Phase 1,” which could happen by the end of this year.

Phase 2 includes a more extensive public input campaign and equity analysis in order to gather more data on the size of the impacted business community and hear concerns or support from residents. From there, a new ordinance would be developed targeting single-use plastic.

and education and outreach,” according to the staff report.

Paper bags were first introduced as an option for curbside leaf collection in 2018. If City Council were to approve changes to the existing sanitation ordinance as recommended by the Governance Committee, plastic bags would be phased out entirely.

The revised ordinance could come to City Council for consideration in December.

This would eliminate 120,000 single-use plastic bags from the landfill annually, said Herring.

As part of the transition, a limited supply of paper leaf bags would be provided to residents at no cost.

Fall color: Will WNC have a brilliant leaf season? Experts give their forecast.

This transition is estimated to cost $20,000 to include one-time purchase and distribution of 30,000 leaf bags to residents. Funding has already been identified within the Public Works Department budget.

Education and outreach materials have already been created and are scheduled to be deployed through the Communications and Public Engagement Department.

There could be an increased cost to residents currently using plastic bags for leaf collection of approximately 10 cents a bag.

According to the staff report, paper bags can be purchased in bulk, particularly during non-peak leaf season, for the same price or less than plastic lawn bags. Alternatively, residents may choose to make a one-time purchase of reusable containers

If approved, the change would be made optional until Sept. 1, 2023.

How would banning all single-use plastic impact city stores, residents?

MountainTrue is among the organizations that form the Plastic-Free WNC coalition, which has been a staunch advocate for the proposal to ban all single-use plastic bags. But the conversation has not been without discourse.

If approved, Asheville would be the first, and potentially only, municipality in the state to impose a plastic ban since a similar ban was implemented, and later repealed, in the Outer Banks.

While there is still legal uncertainty surrounding the potential 10-cent fee on paper bags, City Attorney Brad Branham said Aug. 24 he believes his office has the legal authority to enact a local ordinance controlling the types of items that might enter the municipal solid waste stream, such as plastic bags.

But one North Carolina group, the N.C. Retail Merchants Association, pushed back against the legality of the proposal.

Andy Ellen, president and general council of the organization, said not only would the ban of plastic bags negatively impact retailers and consumers amid record inflation numbers, but is not legally within Asheville’s right.

“We strongly believe that there is not statutory authority or constitutional authority to regulate or tax plastic bags at the local level,” Ellen said.

He said the effort “runs afoul” of both N.C. General Statutes and the N.C. Constitution.

“We are at a time right now where the last thing we need to be doing is raising additional costs on grocery or other retailers that would increase the cost of food to consumers,” Ellen said. “People are struggling enough as it is.”

For some retailers, however, the potential plastic bag ban is not a concern.

It was a decision driven by environmental concerns, he said. At the front end of the store, there are still paper bags and a variety of reusable options, including recycled boxes from food packaging.

Though the co-op considered a fee on paper bags, they decided against it, opting to keep the burden of the new policy on the store, not the customer.

“We felt like, we can’t continue to spend our money on single-use plastic bags, so we just stopped ordering them,” Sullivan said “And, like I said, there was very little reaction, it just went smooth.”

Swimming, paddling in French Broad River? Here’s how to check E. coli levels before you go

Answer Man: Why is the French Broad River so muddy lately?

He acknowledged concerns about how a ban could impact low-income or houseless individuals. This has also been a concern of the city, and Herring included an equity analysis among her project milestones for the development of a new ordinance.

“It will be interesting to see how it rolls out, but we feel good about not ordering those plastic bags, and I would like to see a change,” Sullivan said. “I think society as a whole really needs to think about how they’re using plastic and where it ends up.”

“The cities make the ordinances, and we follow them as a business in the city,” she said.

Sarah Honosky is the city government reporter for the Asheville Citizen Times, part of the USA TODAY Network. News Tips? Email shonosky@citizentimes.com or message on Twitter at @slhonosky.