DHAKA – A report published by this daily earlier this month suggests that Chattogram, the second largest city in Bangladesh, produces 249 tonnes of plastic waste every day, which has the potential to go up to 428 tonnes per day by 2052. The findings were revealed in a study by the Department of Civil Engineering of Chittagong University of Engineering and Technology (Cuet). The waste includes sachets, single-use utensils and personal care items, among others. Unfortunately, 56 percent of the waste remains uncollected.

While these facts present a grim picture of plastic waste mismanagement in Chattogram, the overall scenario of the country perhaps paints a more alarming landscape. According to the World Bank, in December 2021, Bangladesh was one of the top countries in the world in terms of plastic pollution due to inadequate plastic waste management. The annual per capita plastic consumption in Dhaka alone is 22.25kg. The number is more than three times the national average for urban areas. A report by business consulting firm LightCastle Partners on the plastic industry suggests that Bangladesh ranks 10th in mismanaging plastic waste, and in Dhaka, between 2005 and 2020, daily plastic waste has seen a spike from 178 tonnes to a staggering 646 tonnes.

For all latest news, follow The Daily Star’s Google News channel.
The piling up of plastic waste is a worrisome development as it can have severe environmental consequences. Plastic is mostly made from “natural materials such as cellulose, coal, natural gas, salt and crude oil through a polymerisation or polycondensation process,” according to Plastics Europe, a leading pan-European trade association. And when exposed to the sun and its heat, these can emit significant volumes of greenhouse gases. This certainly contributes to the increasing temperature, which in turn can facilitate plastic waste in generating more harmful gases, including ethylene and methane, which can further push the temperature higher, creating a nightmarish cycle of destruction.

Given that plastic is not naturally biodegradable, the only way forward for plastic management is adopting a circular economic model to manage plastic waste. Of the 646 tonnes of plastic waste collected daily in Dhaka, only 37.2 percent is recycled. The rest ends up in landfills, water bodies, playgrounds, roads and sea beaches, among other places. And this discarded waste impacts the environment, affecting not just the country but, in a holistic sense, the overall health of the entire planet and all its inhabitants.

Realising the urgency of combatting plastic pollution in a structured way, the government has drawn up a National Action Plan for Sustainable Plastic Management based on the 3R approach of Reduce, Reuse and Recycle. This is focused on the circular economic model and has set specific goals to reduce plastic waste. Some of the goals include recycling 50 percent of plastics by 2025, phasing out single-use plastic by 90 percent by 2026, and by 2030, reducing plastic waste generation by 30 percent based on the 2020-21 baseline.

Apart from this, the government, in the past, took some commendable steps to curb plastic use. In 2002, Bangladesh became the first country in the world to put a ban on thin plastic shopping bags. In 2020, a High Court directive banned single-use plastic in the coastal areas and in hotels and motels around the country. Moreover, the Jute Packaging Act, 2010 proactively promotes alternative packaging for six essential items, including rice, fertiliser and paddy. These are bold and laudable measures, but unfortunately, they are not usually put into practice. And it must be kept in mind that the government alone cannot manage plastic waste. As a significant contributor to this menace, the private sector needs to come forward to claim ownership of the consequences of their actions, and take effective and immediate measures to support the nation in this fight. 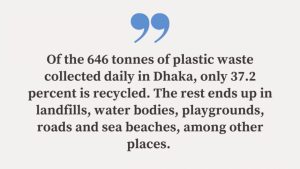 The private-sector companies, who are daily contributing to the ever-growing problem of generating plastic waste in the form of products, packaging, and bottling, need to rethink how they can fully adopt the 3R approach. Currently, there are about 5,000 companies in the country, many of them small, which are contributing to production and even export of plastic goods. Some of the bigger companies, including some major multinationals in the Fast Moving Consumer Goods (FMCG) industry, are going out of their way to not only recycle and reuse plastic internally, but also support various city corporations in collecting – through formal and informal channels – plastic waste, so that they can be properly and safely recycled for reuse or repurpose. Many of these companies have set internal targets to fully convert to the use of recycled plastic in their operations in order to minimise their plastic footprint. And some others have taken up special measures such as coastal clean-up drives.

But there are companies, especially those with small operations – many of them making cheap plastic products and packaging in shabby workshops in Old Dhaka (often causing fatal fire incidents) – which do not understand the outcome of their actions, and are going on with their business without any hesitation. Such discrepancy in actions among players operating in the private sector create barriers in the making of an ecosystem that promotes implementation of a circular economic model.

At this point, the government needs to invest more time in helping create policies and frameworks that promote elimination of plastic waste through inclusive and holistic measures. What gives us hope is that awareness of the need for plastic recycling has spread across the country. The plastic recycling business that is thriving in the northern part of the country – with people at the grassroots level taking leadership in driving this business, which consists of about 1,000 plastic recycling factories across eight districts – is really an eye-opener. It goes to show that if there is awareness, if there is a will, people will find a way. But for these businesses to flourish further, adequate policy support and incentives are crucial.

The government can consider preparing micro plans – perhaps under the National Action Plan for Sustainable Plastic Management – that are inclusive in nature and require committed action from all the players involved in the production and usage of plastic in the private sector to play their well-defined roles in eliminating plastic waste. And to encourage everyone to play their part, there could be a reward mechanism for companies that are compliant and fulfilling targets. It could be in the form of tax exemptions or other business incentives.

It is only through an inclusive model that we would be able to truly embrace the 3R approach of plastic management and reduce our plastic footprint as a nation.

Tasneem Tayeb is a columnist for The Daily Star. Her Twitter handle is: @tasneem_tayeb