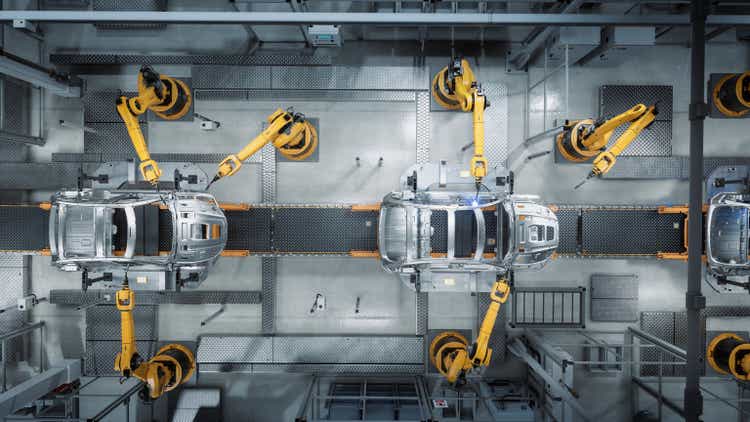 Avnet, Inc. (NASDAQ:NASDAQ:AVT) is a leading technology distributor that serves a broad range of customers in the technology industry. It helps its customers improve their supply chains; it also designs and manufactures integrated solutions that promote improved efficiency. The company has been providing these solutions for over a century and currently serves 140 countries and has an improving workforce of 15,300 employees around the world.

In its Q4 2022, AVT remains efficient in managing its inventories despite today’s macro headwinds. This is a result of successful adaptation to the change in global market conditions. In fact, they actually managed to realize $24,310.7 million and a net margin of 2.85%, their best figures over the past 5 fiscal years. This might improve further, as most of the analysts see inflation having peaked, which may support management claims of continued strong demand in the future. AVT is cheap and attractive at today’s price.

The management still sees secular growth and believes that AVT will remain strong, especially with today’s electrification trend in transportation and automotive and continued digitalization in the industrial sector. AVT ended its Q4 2022 with outstanding growth in its top and bottom lines, growing 24.45% and a solid 258.53% on a year over year basis, respectively. This snowballed into its growing EPS in FY22, amounting to $7.02, up from $1.95 in FY21.

Despite this solid run-up, according to the management, they still expect sustained growth on its top line with an expectation of a 5% to 8% compounded annual growth rate over the next three to four years. Although this might be challenged with its outlook for Q1 2023, as quoted below, where it sees a sequential decline of between 1% and 4% in constant currency and considers seasonality in its operation in the Asia region, its midpoint outlook will provide a better look at its trailing adjusted diluted EPS of $7.63, which is up from its $6.93 recorded in Q4 2022.

For our fiscal Q1, we are guiding revenue in the range of $6.2 billion to $6.5 billion and adjusted diluted EPS in the range of $1.85 to $1.95. Our first quarter guidance today is based on current market conditions, including a $100 million negative impact on sales guidance at the midpoint from the recent strengthening of the U.S. dollar as compared to the fourth quarter. Source: Q4 2022 Earnings Call Transcript

The company expecting a sustainable operating margin of 5% for the next three to four years, making it an interesting stock despite today’s macro headwinds.

While Avnet experienced inflationary pressure, it didn’t stop from pursuing its goal of margin expansion. The company generated a growing gross margin of $12.20% in FY22, better than 11.47% in FY21 and 11.70% in FY20. This is thanks to its effective inventory management. AVT’s total inventory has accumulated to its highest level in the past 5 years and reached $4,301 million. Although there is an inventory buildup, the number of days that the company turns its inventory into sales is impressively improving as shown in its Days Sales of Inventory of 63.96 days, which is better than its 3-year average of 65.39 days, especially considering today’s operating environment.

This is no surprise to see outstanding growth on both its bottom line and earnings per share, as mentioned earlier.

On top of this, AVT’s management is investing heavily in demand generation and its Farnell business segment, especially its e-commerce operation, warehouse capacity, and inventory SKUs. In fact, according to the management, they are doubling up their current budget for CAPEX this FY22, amounting to $48.9 million.

And so, I think the guidance we gave there was around $100 million or kind of double where we’ve been. But a lot of that’s focused on Farnell, right, systems, warehouses, getting the right digital tools in place. Source: Q4 2022 Earnings Call Transcript

This will position Avnet in focusing on high growth markets, especially the industrial and automotive industries. The image above shows expected growth in its respective served market. According to the management, they are expecting a conservative 5% compounding annual revenue growth over the next three years.

Using the analyst’s estimate for FY25, as shown in the image above, at an estimated 5% operating margin, we can arrive at an estimated $1,370 million EBITDA, which is higher than its current EBITDA figure of $1,089.9 million. Even with a conservative top line and an implied 8x EV/EBITDA and 10% discount rate, AVT remains cheap compared to its derived fair price of $67 per share.

Analysts may be considering a prolonged cyclical softness in the automotive and industrial markets, where bookings have moderated, according to management, which explains why the stock has a hold rating and an average target price of $47.

With no improving catalyst for today’s rising inflation, I believe AVT will remain in the $40-$50 range; if $40 fails, I believe $36 is the next support level to watch. If bullish momentum continues, it should retest its 20-day simple average in the coming trading weeks. However, looking at its MACD indicator, it indicates to investors and traders that AVT may temporarily lead downward before retesting its 52-week high of ~$50. Given today’s macro headwinds, building positions gradually will reduce volatility risk.

Another value adding catalyst for AVT is that it pays dividends with a forward dividend yield of 2.71% with only 14.39% payout ratio. The management also expects a $1.5 billion to $2.0 billion cash flow from operations in the next 3 to 4 years, which will be used to improve shareholder value.

With this catalyst in place, I believe dividend payments will continue to rise in the long run, making AVT more appealing. Furthermore, the company has announced a $600 share buyback authorization, and in FY2022, it repurchased 4.7% of its outstanding shares for $193 million, leaving $531.9 million available under its share buyback program.

To summarize, AVT has a positive outlook from management and continues to expand its margins, making this stock a good long opportunity.

Thank you for reading and good luck!