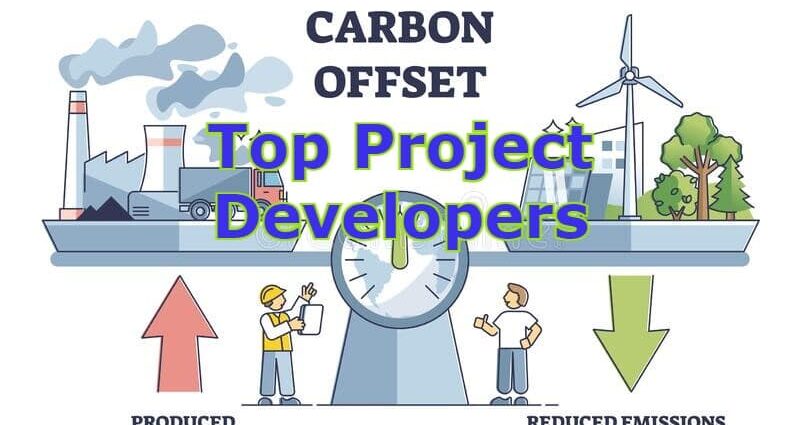 Are you looking to directly reduce your carbon footprint or support projects that cut emissions elsewhere? Then carbon credits allow you to do either of these.

Each credit goes through a general lifecycle process that starts from creation to retirement. Individuals and firms use these credits to voluntarily offset their emissions.

As such, we’re also expecting to see more carbon offset project developers enter the market to meet the rising demand.

This calls for a better understanding of the role of developers in the VCM. The same goes for the state of the carbon project developer ecosystem and its maturity level.

That’s important to inform the supply-side views on the market’s ability to deliver on the integrity claims of carbon credits.

Most notably, this article will also shed light on what are the top carbon offset project developers that contribute to the growth of the market. We’ll identify five of them to help you find the best developer you need.

The Role of Carbon Project Developers in the VCM

It also requires further commitments to develop carbon offsetting projects to neutralize hard-to-abate emissions. This accounts for about 30% of global emissions.

It’s becoming clearer that well-designed VCMs are critical to achieve the Paris Agreement goal. That’s to enable the world to reach net zero emissions by 2050.

And carbon project developers play a central role in the VCM. They are key to delivering its success given the current state of the market and its projection.

Project developers perform several tasks to help ensure the growth of the VCM. These include:

In sum, the diagram below shows the central role project developers have in the VCM.

The State of the Carbon Developer Ecosystem

An analysis noted four key observations on the current ecosystem of the carbon offset project development.

The top 20 developers account for about 39% of the total issued volumes to date as shown below. And the top 5 of them are responsible for 19% of all issuances.

Meanwhile, the small and mid-sized carbon project developers that hold smaller carbon portfolios dominate the ecosystem. In fact, 75% of them have issued fewer than 500,000 carbon credits.

Also, ¾ of project developers are experts in dealing with only 1 project to date. Only 3% of them have a diversified carbon portfolio with ~15 projects.

The difference is so huge that you’d think the developer market remains largely untapped. And it seems to be the case right now.

9 out of the top 10 carbon offset project developers by issued volume are working on large-scale avoided conversion / REDD+ or improved forest management projects.

Around 97% of developers have experience developing projects only in one country with very few regional and global operators.

The largest number of project developers are predominantly found in India, China, Turkey, and the United States. Interestingly, Europe has few projects even if the region has many carbon offset buyers.

This trend may lead to increased market consolidation with smaller developers at risk of being overlooked by participants.

Renewable energy developers, mainly found in India and China, dominate by number as seen in the chart.

But lack of expertise in nature-based projects may limit developers with removal portfolios producing industrial carbon capture credits. This may give them higher project development risks like fire.

Nature-based project developers represent over 45% of total volumes of credits issued. This lead is due to high entry to market barriers.

Apparently, most issuances are in the hands of a few large REDD+ operators in the Global South. While the top carbon offset project developers of most improved forest management portfolios are in the U.S. Blue Source and Finite Carbon are the dominant players in this field.

But in the absence of new market players, there’s a risk of failing to meet increasing demand. This may further lead to carbon pricing implications.

Project developers equally focus on expanding large-scale nature-based avoidance carbon credits. These credits are estimated to be contributing a lot to supply in the next decade.

But other types of carbon credit projects are also available to consider for your offsetting needs.

With that being said, here are the top five carbon offset project developers that made it to our list.

Formally founded in 2001, Blue Source has a new brand name called Anew after merging with the Element Markets last June. It gets the top one slot when it comes to providing offset credits from improved forest management, carbon capture, and other projects.

It has offices in the U.S., Canada, and Europe, and an environmental commodities portfolio that extends across 5 continents.

Since inception of its legacy companies, Anew has the following achievements:

Plus, the firm also developed projects with protocols made via scientific review and public stakeholder processes. Oversight for these projects comes from the top carbon standards, including:

What sets Anew apart from other project developers is that it serves the multiple functions of a broker, trader, retailer and advisor in the carbon space.

Under its core project development expertise, forestry projects, Anew follows these steps for a project to be eligible for offset crediting:

With offices in 7 US states, it combines unparalleled project development experience with extensive carbon market knowledge.

To date, this offset developer is able to achieve the following performance.

The developer generated over ⅓ of all compliance offset supply. It has also delivered 800+ million dollars to landowners.

Unlike other top carbon offset project developers such as Anew, Finite Carbon is working with landowners who have 5,000 acres or more. Anything less than 1,000 acres is not a cost-effective project for the company.

Its entire offset project development process can take up to 6 months long, depending on several factors. In general, it involves the following processes:

Same with other developers, Finite Carbon pays the capital for each project. And then it collects only a percentage of the carbon offsets once completed.

With its wide coverage, the developer’s projects are in every region and major forest type from the Appalachians to coastal Alaska. Below is its project map showing its forest projects.

If you’re after a project developer that demonstrates expertise in forestry offsets, Finite Carbon should be on your top list.

For over 15 years, 3Degrees has been a pioneer in providing climate solutions. Within that time period in the project development market, the company has achieved these results:

The company also deals with many other carbon offset projects apart from nature-based solutions. They mostly include landfill gas capture projects.

3Degrees’ project development solution is broken down into 5 major phases:

Setting aside its proven track record in the space, what makes 3Degrees stand out from other top carbon offset project developers are a couple of differences. They include the following:

Tailored Solutions:
3Degrees help organizations build a portfolio of high-quality projects that are relevant to their business and engage stakeholders.

All these enable 3Degrees to be a strategic partner for entities looking to build a portfolio of high-integrity carbon reduction and removal projects. They include opportunities both for long-term and new project development.

Making it to the top 4 spot, Forest Carbon’s main goal is to restore degraded tropical forest and wetland ecosystems. These projects fall under the broad category of REDD+.

With offices in Jakarta and Singapore, Forest Carbon’s team is built on a track record of success in the region. The team brings a decade of experience working on the ground, from mapping wetlands and assessing below-ground carbon storage, to winning community support.

Forest Carbon is on the ground to assess threats to tropical forest ecosystems and develop business models to protect them.

From the dry dipterocarp forests of Malaysia to the carbon-rich peat swamp forests of Indonesia, the developer specializes in assessing these areas. It offers the following major advantages in creating carbon credits from natural climate solutions:

C-Quest Capital (CQC) is a social impact project developer that aims to transform the lives of families in poor communities worldwide.

CQC was founded in 2008 and is headquartered in Washington D.C., USA, with local offices in India, Malawi, Malaysia, Singapore, Cambodia and Australia. Its global teams lead project operations across Sub-Saharan Africa, Central America, and South and Southeast Asia.

Together, they form the so-called Transformation Carbon projects. They all comply with specific carbon offset standards. They then go through rigorous 3rd-party assessments by auditors to ensure credits are real and measurable.

Each project is registered onto a cloud-based data management system using Android phones or tablets. Registration involves data collection for monitoring and follow-up.

Doing all these are critical for project evaluation, verification, and improvement.

So, for high integrity and high impact offsets that help the poorest communities, CQC tops this project category.

As you can see, each project developer has its own set of processes when developing a project. But overall, you have to carefully think about the specific results you want to achieve.

They may follow the same offsetting standards but not all carbon offset project developers will make it to the top of our list. You’ll never go wrong with any of them.

2022-09-14
Previous Post: UW research labs struggle to sustainably manage waste · The Badger Herald
Next Post: The environment got better for Dems — but voters still have concerns