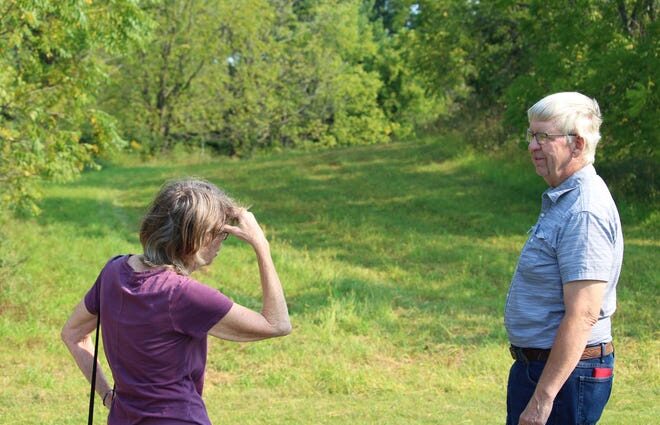 VIROQUA – When Gail Frie moved to Viroqua in the 1990s, he noticed a divide in the small western Wisconsin city between older residents, many of them farmers, and younger progressives who’d come there seeking a quieter life.

It’s not an uncommon split, especially in more rural areas. But in time, Frie noticed the relationship improving — bolstered by a shared value of the land and a desire to protect it.

Those shared values, Frie suspects, are what has generated across-the-board excitement about a new venture for the local cemetery: green burial.

In August, the Viroqua Cemetery Association voted to approve reserving a portion of their cemetery, which has been around since the mid-1800s, for green burials.

Green burial, sometimes called natural burial, removes embalming chemicals and large concrete and metal vaults from the burial process. Instead, the person is buried in a biodegradable casket or shroud. Graves are dug shallower, so that the body rests within aerobic soil and can decompose easily. The land the plots are on is often given special care to preserve its natural habitat.

Interest in being buried in a more environmentally friendly way has been growing for years. In 2017, more than half of respondents to a National Funeral Directors Association survey indicated they wanted to explore it.

Still, just a handful of sites in Wisconsin offer the option. In the southwestern part of the state known as the Driftless region, there had been no public place for it, despite the area’s deep connection to land stewardship.

After the cemetery association vote, that’s soon to change. For Frie, president of the association, it’s a tie back to the burials that happened at the cemetery’s beginnings.

Though the idea came recently before the cemetery association, it’s been percolating in the community for much longer. That’s thanks to a group of women who formed an organization called Threshold Care Circle more than a decade ago.

They help advise people on what they call family-directed funerals — transporting, preparing and honoring a person’s body after death at home instead of getting a funeral home involved. It reverts to the way deaths were handled hundreds of years ago, and makes the process feel more personal, giving more time for grieving, they say.

Kathy Doerfer, a founding member of Threshold Care Circle, said her mother died just before the group’s first meeting. After her mother’s time in a hospice facility being cared for by family around the clock, Doerfer remembered that when she died, her body was out the door to a funeral home in 45 minutes.

RELATED:We can’t take it with us, even our bodies, so why try? Green burial offers an alternative

RELATED: Forest Home Cemetery is now also an arboretum, and is as much a park as a history-filled resting place

Since the group began to consult and offer workshops, according to Liz Franklin, another founding member, there have been at least 30 family-directed funerals in Viroqua — substantial in a community of about 4,500. The group has also begun to hear of people holding funerals at home without consulting them, which they take as a sign that the practice is spreading as they’d hoped.

But to work so hard at bringing back an age-old process to honor the dead gently and naturally and not be able to see it all the way through burial didn’t make sense to them. So they formed the Driftless Green Burial Alliance in the hopes of securing a place for natural burials.

Creating a new cemetery comes with a lot of rules. So they pivoted and reached out to Frie, who had already heard they were interested.

Together, they took a 12-week masterclass on the topic. Frie, who had worked in recycling before retirement, saw the practice as an alternative to burying natural resources in the form of the materials of the casket and vault for a conventional burial — something he’d had a problem with for years. (Americans put 20 million feet of wood, 4.3 million gallons of embalming fluids, 1.6 million tons of reinforced concrete, 17,000 tons of copper and bronze, and 64,500 tons of steel into the ground annually in conventional burials, according to the Green Burial Council.)

The last step was bringing it to the full cemetery association.

The other members of the association were hesitant at first, Frie said, and unsure of how the community would react. But a public meeting with dozens of people drew only positive responses, and when he brought the idea to the City Council, he was surprised to learn that a few of them had even attended another green burial in the Madison area.

“We really haven’t run into anything negative yet,” Frie said. “I see this moving forward.”

Green burial could be next chapter in evolution of Viroqua Cemetery

The land that will be used for green burials is a 15- to 20-acre stretch of natural meadow that the cemetery already owned, encircled by foliage and not too far from its conventional gravesites. The first two sections will hold about 1,600 graves.

“There’s so much land that this will provide green burial options in this area for hundreds of years,” said Kelly Whited-Ford, a member of the Driftless Green Burial Alliance.

Currently, their closest green burial option is near Madison, at Natural Path Sanctuary in the town of Springdale. The land belongs to the Farley Center, which helps under-resourced people learn to farm sustainably.

When Shedd Farley took over the property from his father in 2015, he was selling about 38 plots per year. Today, demand has grown so much that they have around 200 sales in a year.

Families can choose the area where they want their loved one to be buried. If they want to have a memorial service, they can even be involved in lowering the body into the ground.

Farley has given many talks about green burials, including to the Viroqua group. In time, he said, he’s watched it change from a fringe idea to a mainstream one. The national Green Burial Council estimates there are 350 green cemeteries currently operating across the country.

“Now it’s not a novelty anymore,” Farley said. “Everybody’s worried about the environment.”

Beyond the environmental benefit, green burials could give a financial boost to cemeteries that are losing money as more and more people choose cremation, a cheaper option for the end of their life. Over 50% of the burials at the Viroqua Cemetery are of cremains, Frie said. (The fossil fuels burned in cremation can still create an outsized carbon footprint.)

The price of green burials varies. At the Farley Center, for example, families are first asked to make a donation of $2,500 to the center itself, plus a base burial cost of $1,000. Generally, costs could rise as demand continues to grow.

Still, a person’s reasons for wanting a green burial may transcend costs.

“A lot of people who want green burial want their final act to reflect how they lived,” Whited-Ford said. “To give back to the earth that has nourished them their whole lives.”

That idea is what those involved believe make it a perfect fit for Viroqua.

Now that it’s been approved, they’re aiming to raise $15,000 to hire a landscape architect to survey the land. Total costs for the site will be more — they eventually want to add a walking trail and a nondenominational chapel, as well as buy the cemetery a lighter piece of equipment to swap out for the heavy backhoe that currently digs graves.

Franklin, Doerfer and Whited-Ford believe that once the site is up and running, more people from farther away will be drawn to Viroqua to be buried there. They believe it may be the largest hybrid cemetery — that is, conventional and green burials on the same land — in the country.

Frie said he has mixed feelings about that possibility. The cemetery is legally obligated to be open to anyone, but he wants to make sure that the people of Vernon County always have a place there, should they want it. Plus, he thinks, green burial cemeteries are likely to expand in the region given increasing demand and the Midwest tradition of farming and land conservation.

Regardless of how popular it eventually grows, the sustained work of Threshold Care Circle and the Driftless Green Burial Alliance has resonated with the community. (A Facebook post announcing the green burial area had been approved received more than 200 likes.)

Madeline Heim is a Report for America corps reporter who writes about environmental issues in the Mississippi River watershed and across Wisconsin. Contact her at 920-996-7266 or mheim@gannett.com.

Please consider supporting journalism that informs our democracy with a tax-deductible gift to this reporting effort at jsonline.com/RFA.