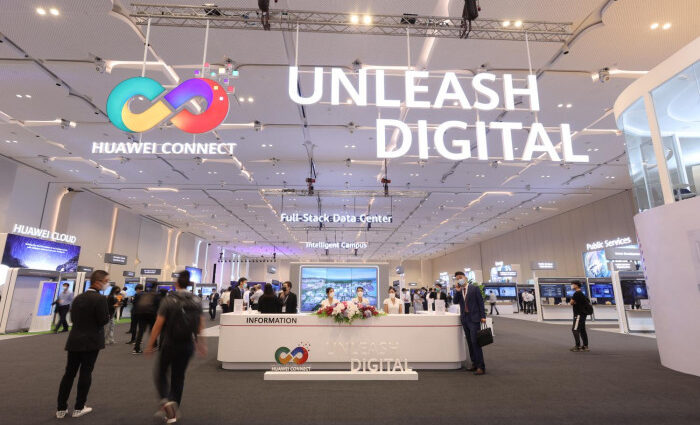 The ambience at the ‘Huawei Connect 2022’ event which is currently being held at Queen Sirikit National Convention Centre.

Global tech powerhouse Huawei Technologies is sharpening its focus on strengthening its partnership ecosystem for growth by launching a “Go Cloud, Go Global” plan to work with partners across industries to capitalise on its cloud power to push for digital solutions and capacity building.

The move is part of Huawei’s strategic approach to deepen technology engagement with partners, ranging from 5G, cloud and artificial intelligence (AI), as well as digital skill building to level up the digital economy.

The launch was made at Huawei Connect 2022 conference held at Queen Sirikit National Convention Centre in Bangkok yesterday. The three-day event, which runs until tomorrow, gathered ICT industry leaders, experts and partners from around the globe to build up a stronger digital ecosystem.

Huawei is also broadening its digital business and striving for what is called “Everything as a service”.

“We support our partners through capability building, joint solutions and co-marketing,” Ms Shi said. Currently, Huawei Cloud has more than 38,000 partners around the world.

Some 2,400 partners are in Asia-Pacific, including almost 400 in Thailand.

“We work with our partners to drive digital across industries with leading successful cases in finance, government, carriers, internet and education,” said Ms Shi.

To support digital transformation undertaken by countries, the firm has established 70 availability zones (AZs) for cloud services, she said. Those include three in Thailand, located in Bangkok, Chon Buri and Samut Prakan.

Alex Zhang, chief executive of Huawei Cloud, said by the end of this year, Huawei Cloud aims to have 29 regions and 75 AZs for cloud services, covering 170 countries and regions around the world.

Mr Zhang also highlighted the push for “Everything as a service”.

He said the company has three pillars for business strategies, including infrastructure as a service, technology as a service and expertise as a service.

These can form part of “Everything as a service” through cloud foundation to drive an intelligent world, he said.

The first lies in boosting digital infrastructure, which caters for “10-Gbps” connectivity, and supporting billions of connections for industrial scenarios.

Second, companies can benefit more from cloud services, including advanced tech services that are easy to use and drive leapfrog development.

The third is to support digital ecosystem. Mr Hu said it is vital to build up partners and strengthen the talent pool and give more support to small and medium-sized enterprises (SMEs).

“At Huawei, we’re actively working with our industry partners to define, develop and verify the next evolution of 5G technology — 5.5G — both in fixed and wireless domains,” said Mr Hu.

Speaking at the event, Chaiwut Thanakamanusorn, Digital Economy and Society (DES) minister, stressed Thailand is now on the path of post-pandemic recovery while an innovation-led and knowledge-based approach would give a boost to that.

He said the digital economy is expected to account for 30% of GDP by 2027.

“Thailand is ready to rebuild its strengths to move forward on a stable path to recovery”, he said.

The penetration rate of major digital tech applications, such as mobile payment, e-commerce and cloud applications, increased by more than 20%, which has played an important role in promoting the digital economy.

In 2021, the annual growth rate of digital services reached 44%, the digital content industry grew by 26%, and the big data industry by 4%.

The DES Ministry has given priority to the development of digital infrastructure, a pillar for achieving digital economic prosperity, he said.

The ministry has constructed government data centres and cloud services to support innovation and enable the government to offer more equitable public services and work to promote SMEs.

According to a survey data conducted by the Office of National Digital Economy and Society Committee, the economic contribution of one digital talent is equal to 10 ordinary workers, he said.

“Thailand aims to train over 500,000 digital workers within the next five years,” Mr Chaiwut said.

Supattanapong Punmeechaow, deputy prime minister and energy minister, said the government has ushered in the “Better and Green Thailand 2030” plan as a pathway to achieve sustainability and economic growth.

The first initiative is aimed at creating 1.7 trillion in GDP through S-curve industries, including digital business.

Investment under the plan is expected to reach 2 trillion baht, create 600,000 jobs and slash carbon dioxide emissions by 13%.

He said Thailand has a policy to make the country a digital hub of Asean and continued support of digital economy.

The country’s digital economy is now worth almost US$100,000, landing Thailand in second place in Asean in terms of the digital economy, Mr Supattanapong said.

“It is vital to support high-performance digital infrastructure to drive the digital economy,” said Mr Supattanapong.

Thailand is among the first Asean countries that pursued 5G commercial use, he said. The country is expected to have more than 10 million 5G users by the end of this year.

Thailand is the main route for exchange of information in North Asean and it is set to become the regional talent and innovation hub, said Mr Supattanapong.

It is the government’s core strategy and vision to build technological and innovation capabilities to support resilient growth and demand of industries.

Simon Lin, president of Huawei Asia-Pacific Region, said the region expected to spend $200 billion on cloud services by 2024 while every dollar invested in ICT grows GDP by about $13, citing market research analyst IDCT.

“Huawei is committed to becoming a key contributor to the digital economy in the Asia-Pacific region,” Mr Lin said. Digital infrastructure is the foundation to drive digital transformation, he said.

“Asia-Pacific stands at the forefront of the global digital landscape,” Mr Lin said.

According to him, there are four means to unleash digital power. The first lies in digital transformation that can be a key driver of economic growth.

The second involves low carbonisation, which is a new driver of resilient development.

The third concerns sustainable development and ICT has become a key to pursuing this.

Finally, Asia-Pacific stands at the forefront of the global digital landscape, he said. According to McKinsey, the pandemic sped up digitalisation by seven years globally and 10 years in Asia-Pacific.

Yang Mee Eng, executive director of the Asean Foundation, said the use of digital technologies can propel economic gains in Asia-Pacific to more than $8.6 trillion in 2025 with 65 million new jobs created.

She said Asean still saw a significant share of mismatched workers in qualification levels, for example 37% of workers in Thailand are mismatched with their education fields.

The Asean Foundation is working with Huawei to support Asean Seeds for the Future programme to groom the young generation in the digital economy and drive the Asean Digital Master Plan 2025 by levelling up necessary digital skills among citizens.

Digital economy in Asean is expected to contribute $1 trillion to regional GDP by 2030, she said.

2022-09-19
Previous Post: Dr. Chris DeArmitt, Author of The Plastics Paradox, on Why We Need to Rethink the Material’s Reputation
Next Post: Energy & Environment — Puerto Rico loses power after hurricane