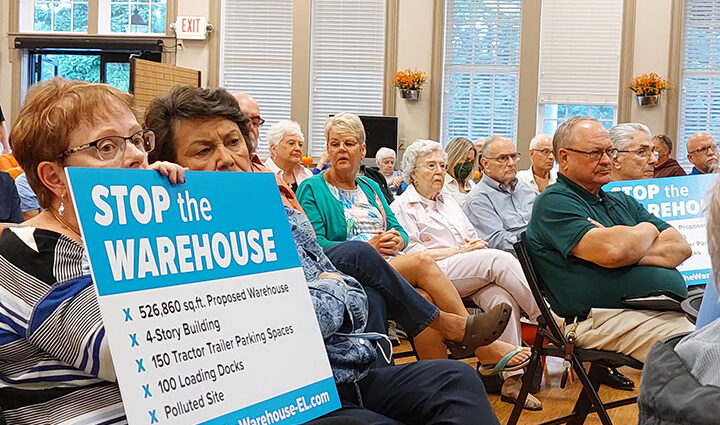 EAST LONGMEADOW – It was standing room only in the Pleasant View Senior Center auditorium on Sept. 20 as more than 100 residents gathered at a Planning Board meeting to weigh in on the construction of a proposed warehouse at 330 Chestnut St.

Jane Mantolesky of Fitzgerald Law addressed the board on behalf of the applicants, East Longmeadow Redevelopers LLC. She asserted that the East Longmeadow’s industrial garden park zoning allows “all commercial uses,” “all industrial uses” and “all warehouses.” She noted “only reasonable conditions can be imposed.”

Rick Pratt of architecture firm Pratt Design Studio said the warehouse would be faced in concrete panels in a pattern that would visually break up the façade. The exterior would be off-white, dark blue, medium blue and dark gray with black trim. Windows in the upper half of the building are meant to provide light for offices.

Rob Levesque, of the design firm R Levesque Associates, said the wetlands and trees “provide a great buffer” shielding view of the warehouse from the Fields at Chestnut condominiums. Levesque originally stated that the height of the building would be 45 feet, but was corrected by co-owner Joe Marino, who stated the maximum height would be 49 feet. The existing building is at least 55 feet tall. Planning Board Clerk Russell Denver asked if the warehouse could be seen from the condominiums.

“From the residences, I say no. If you can’t see it now, you won’t see it then,” Levesque said.
The plans call for approximately 150 parking spaces for trucks and 100 bays. The property would have passenger vehicle parking on the east and west sides of the building, with loading docks and parking for trucks on the north and south sides. Levesque said this layout was intentional so that if the property were somehow visible from the condominiums, residents would only see passenger vehicles parked.

There will also be “significant” landscaping along the property’s frontage on Chestnut Street, Levesque said, to obscure trucks and loading bays from the road. Levesque acknowledged that a “loop road” would circle the property for access to all sides of the building.
“We want you to know that we’ve looked at this for hundreds of hours. We’re not trying to get something past you,” Levesque said.

The eventual tenant for the property was the subject of much speculation. Sean McMahon, speaking on behalf of East Longmeadow Redevelopers, said that the warehouse was being built “on spec.” On spec is a term used to mean that the project is undertaken in hopes that it will be bought or leased by a client, without any guarantee.

Residents opined on the topic, with many suggesting that the warehouse was being built for Amazon and that delivery vans would “clog” the streets. Sean McMahon, speaking on behalf of the applicants, assured them that Amazon is not an anticipated tenant for the building.

Attorney Michael Pill has been retained by the Fields at Chestnut Condominium Trust, whose condominiums are located on the opposite side of a perennial stream and its surrounding wetlands to the west of the project. Pill stated that the zoning only allows for wholesale warehouses, and the board could not approve the project without knowing what business will occupy the space.

Planning Board Clerk Russell Denver pushed back on that assertion and said the board regularly approves on-spec buildings with uses such as medical offices and restaurants. This project cannot be singled out, he said. Planning Board member George Kingston disagreed and said the board needs a “firm commitment” regarding what operations will run from that building.

Attorney Frank Fitzgerald, of Fitzgerald Law, said there would be no use of the building that is not allowed under the town’s zoning regulation.

The traffic study completed by Jeffrey Bandini of McMahon Transportation Engineers & Planners was created supposing that the existing building, currently vacant, would be used as a warehouse. Based on the structure’s 532,008 square feet of space, Bandini estimated 439 vehicles would pull in and out of the property on an average weekday, as opposed to 464 vehicles pulling in and out of the proposed 562,820-square-foot building. Of those vehicles, 36 percent would be trucks or tractor-trailers, rather than passenger vehicles.

Kingston took note of the use of the Institute of Transportation Engineers Land Use Code 150, used for general warehouses. He said that the traffic data could vary widely depending on what kind of warehouse it is. Pill also commented on this point, saying that the traffic congestion could be up to 2.6 times higher. Bandlini said that without knowing the eventual tenant it would be difficult to assign a specific code.

Questioning the listed footage of the proposed facility, Kingston said it was “rather suspicious” that the building was just shy of the size that would require an environmental notification form (ENF) from the Massachusetts Environmental Policy Act Office. Levesque responded that the project does not have a state permit, and therefore would not trigger an ENF, regardless of size.

Kingston went on to say that the building resembles the aerial view of a cross-dock Amazon warehouse in North Carolina. McMahon explained, for the benefit of the members of the public, that a cross-dock warehouse takes in trucks and the product is sent out on other trucks hours later. He said that the Chestnut Street warehouse is designed for up to four separate businesses, making the individual spaces too small for a cross-dock operation.

Resident Roland Bolduc, a professional truck driver, spoke against the project. He said the turn from Chestnut onto Shaker Road is “not easy. It’s not safe,” in a tractor-trailer. He spoke about the rotary, saying, “Trucks 75 feet long with 74,000 pounds are going to come into the most dangerous intersection in the Guiness Book of World Records.” Denver had also mentioned that trucks traveling into the rotary and said the master plan accepted by the town in 2021 bars decisions that would introduce more traffic into that intersection.

Planning Board member Peter Punderson asked that the distribution of traffic be readjusted from 40 percent traveling west along Chestnut Street to 60 percent directed toward Shaker Road. Going one step further, resident Mary Hurley suggested that the access in and out of the property should be moved to Shaker Road.

“If you don’t want any traffic going down Chestnut [Street] and want to shove it down Shaker [Road], what about the people at Great Woods,” Denver asked, referring to a neighborhood off Shaker Road. Hurley responded that Chestnut Street is “overburdened” with traffic.

Kingston called for an independent traffic study, but Punderson said a study cannot be accurately completed until the tenant is known.

Levesque told the board that the applicants were willing to work with the town and if a traffic mitigation plan was needed, “we are committed to do that.”

The warehouse proposal had gone before the Conservation Commission on Sept. 14. With over 60 people in attendance at that meeting, the commission considered the warehouse project’s impact on two wetland resource areas that abut the property.

“All of our proposed work is outside of those resource areas,” which are “highly regulated,” Levesque said. He added, “Despite the size, it’s pretty minimal as far as wetland impacts.”

The part of the property that is closest to the protected area is an existing driveway, which Levesque said the developer plans to move “40 to 50 feet” away from the wetlands.

Conservation Commission Chair William Arment asked if the asphalt-covered area would be extended westward, toward the wetland resource areas. Levesque stated that the project would have roughly the same footprint as the existing paved area.

Despite Arment stating three times that the wetland resources areas were the only topic over which the commission had jurisdiction, people expressed concerns over the project’s impact on the stormwater system.

Pill had submitted a document stating that the project should be denied by the Conservation Commission. If not denied outright, the document stated that the commission should hire its own experts in wastewater and that the project’s engineers are using outdated criteria for stormwater drainage measures.

Levesque addressed the concerns in Pill’s document, item by item, including that the project design used the stormwater drainage criteria required by the Massachusetts Department of Environmental Protection.

“All the questions and concerns raised in that letter are either not applicable, or we cannot change to meet future climate change data,” Levesque said.

During the public comment section of the hearing, an abutter stated there were “troubling” aspects to the technical analysis for the project, including that the test pits that were used to examine water levels were conducted in May “during extreme drought.” Levesque explained that soil evaluators are not looking at current water levels, but rather, specific signs in the soil of groundwater having historically reached that depth.

Answering a question from Town Council President Ralph Page, who was speaking as a private citizen, Levesque said about 17,000 square feet of currently impervious surface is slated to be changed to native shrubs and vegetative cover and would look like an extension of the existing woods.

Resident Richard Leopold asked how the developers would prevent oil spills, considering the project includes 150 parking spaces for large trucks. Leveque told him safeguards have been included in stormwater regulations “for years,” including a “treatment train,” which includes a sump pump and hooded pipe to prevent floatable solids from passing through, water quality units to remove “total suspendable solids,” and forebays to collect any sediment. There is also a maintenance schedule that must be observed, the operator must have a mitigation plan in place and would face heavy fines for not properly cleaning up spills.

Levesque confirmed, when asked by Conservation Commission Clerk Michael Carabetta, that the proposed stormwater system reaches a higher standard than what is at the site now.

Arment told the crowd that on the matter of hiring independent experts, “I don’t believe we have the right. They’re not asking for anything that will worsen the situation from a conservation perspective.” Carabetta agreed and the commission voted unanimously to approve the project.

Other environmental issues were also discussed. Kingston inquired about a study of the air quality as a result of increased trucks. One had not been completed, Levesque said. Resident John Power asked how the materials from the demolition of the building would be disposed of. Levesque explained that environmental consultant will oversee the demolition and removal of debris, although some materials may be able to be reused.

Fitzgerald said he was willing to meet with residents of the Fields at Chestnut to discuss the reasons for their opposition. Levesque told the board that the team working on the project would work with the town.

“We’re committed to getting the answers the board needs,” Levesque said.

The Planning Board approved the order of a traffic study, which the applicants will fund. The public hearing was continued to the board’s Nov. 18 meeting.