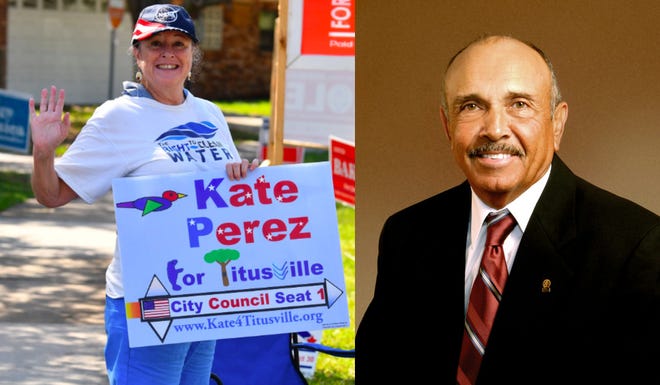 Two issues have risen to the top of the debate over Titusville’s future — protecting the Indian River Lagoon and the environment, as well as growth and development.

Attracting new businesses and new residents to the North Brevard city has been a part of Titusville’s plans for its future for some time, especially after the Great Recession and the end of the space shuttle program more than a decade ago.

But the dire health of the Indian River Lagoon and a beleaguered infrastructure system prone to spewing sewage and other unwanted runoff into the water could prove to be a major hindrance to attracting those businesses and people.

These issues are among those at the forefront of the campaigns of Herman Cole and Kate Perez, as the seek the Seat 1 slot on the Titusville City Council in the Nov. 8 election

Perez, 62, has worn many hats over her long career. As a systems analyst at the National Institutes of Health, she processed and synthesized complex data for the agency. As an alpaca farmer, she studied genetic charts, successfully bred animals, and managed the business of selling the wool to customers.

She has been a fly on the wall at Titusville City Council meetings for three years now, attending nearly every semimonthly meeting. She also has participated in groups such as Speak Up Titusville and the Titusville Tree Team, working to get local legislation passed such as the Right to Clean Water ballot initiative and a tree ordinance to maintain the tree canopy around the city.

Eats in Titusville:Hungry? Go north to Titusville and try these 7 restaurants that opened in the past year

Cole, 76, is no stranger to public and civic life in Titusville. The retired Air Force colonel has served on various boards at prominent institutions in the city. Chairman of the Parrish Medical Center board of directors, Rotary Club president, YMCA board chairman and member of Titusville’s Planning and Zoning community advisory board are all on his resume.

Also on Cole’s resume are two previous runs for City Council — both of which proved unsuccessful — even if this time he is more optimistic about his chances.

Seat 1 incumbent Robert Jordan Jr. did not seek reelection this year after only one term to focus on spending time with his family and traveling. This allowed the race to open up between the City Hall activist Perez and the North Brevard businessman Cole.

Perez and Cole participated in a three-way Aug. 23 primary race that also included Kenneth May. Because no candidate received more than 50% of the vote needed to win the election outright, third-place finisher May was eliminated. Cole and Perez will face each other in a Nov. 8 runoff.

Both Cole and Perez have expressed a dire need to repair the city’s sewage and water infrastructure in order to stop their negative impact on the Indian River Lagoon.

“We’ve got a deteriorating infrastructure, and, as those pipes deteriorate, there’s the possibility that sewage could permeate the soil and get into the lagoon,” Cole said.

“With the leadership experience I’ve had in my career as an Air Force colonel and vice president of the University of Dayton, I know how to get things done,” Cole said.

“We’ve got to bring in businesses, because the businesses are what increases your tax base, so we can fully fund the different departments within the city,” he added.

Without that growth and development, the money won’t be there to fix the lagoon, and its condition will worsen, Cole said.

Perez has argued that too much of the wrong kind of growth will only exacerbate the problems until they blow up in the city’s face.

Cole has said Perez is too focused on the Indian River Lagoon at the expense of other issues facing Titusville residents.

Perez has said Cole is too friendly to development that would degrade Titusville and make it less of a draw for those who want to live and visit the city.

Heedless development actually can repel the businesses and people it hopes to attract, Perez said.

“Other cities don’t do the kind of stuff we’re doing,” she said. “When you’re discharging sewage into the lagoon over and over, and not doing the proper testing, you’re endangering people’s lives.”

“I’m not anti-development, but we need to prioritize the lagoon, because that’s what people love about Titusville. If we just destroy it, who’s going to want to do business here or move here?” Perez asked.

“We need responsible development,” Perez emphasized. “That’s not something people want. They want to clear-cut the lots because it’s cheaper.”

She pointed out the example of Pittsburgh — a city that she remembers growing up for its reputation as a blighted location, with its industries gutted, crumbling infrastructure and a lack of natural splendor.

She said it has bounced back in large part, thanks to efforts to preserve its tree canopy and make sure development was done smartly, rather than simply rapidly.

“This clear-cutting is just wasteful. It saves a few bucks for the developer, but most of them don’t live here,” Perez said. “So when there’s more pollution and the flooding comes, they aren’t here to suffer the consequences.”

Perez also pointed out cities like Boulder, Colorado, or Miami, where tree preservation has been a major priority, but there is no shortage of growth in those areas.

She fears the city of Titusville could give carte blanche to tear down acres of trees without though for the future of the city and the lagoon.

In discussing the growth issue, Cole said: “You know, I ran twice before, and I ran those times on development and growth. I looked at some of the things that I said then, and those same things hold true right now. You’ve got to have growth.”

Campaign contributions paint a picture of two disparate candidates — one who is well-connected and has plenty of cash on hand, and another who has considerably less to spend on the race.

Since the election cycle began, Cole has vastly outraised Perez in contributions, with just over $17,000 put into his campaign coffers. Of that money, Cole has just spent just over $1,700 on signs, supplies and fundraisers.

Perez has previously said she has not sought endorsements, and is trying to run a grassroots campaign.

Titusville City Council seats are elected at large, meaning that members are voted in by all the residents in the city, not within a specific district.

City Council elections are nonpartisan races, with political party affiliations not indicated on the ballot.

Mayor Dan Diesel and Seat 2 Councilwoman Sarah Stoeckel will not be up for reelection until 2024.

Seat 3 Councilman Joe Robinson, who was up for reelection this cycle, was unopposed, and will remain in his seat.

Seat 5 Councilwoman Jo Lynn Nelson kept her seat after the Aug. 23 primary election, by fending off two primary challengers with more than 50% of the vote, preempting the need for a runoff election. Nelson got 52.58% of the vote, compared with 28.25% for Stan Johnson and 19.16% for Nathan Slusher.

With a population of more than 49,000, Titusville is Brevard County’s third-most-populous city, behind Palm Bay and Melbourne.

Here is more on the two candidates in the Seat 1 runoff election:

Education: Bachelor’s and masters degrees in architecture from Tuskegee University

What are the top two to three issues in Titusville, and what specific actions will you take to address them if elected?

While we welcome that growth, as a community, we need to navigate with strategic insight to protect and nurture this beautiful place we call home.

What are the top two to three issues in Titusville, and what specific actions will you take to address them if elected?

We need to take better care of our environment, because once you break it, it’s really hard to fix.

We need more accountability in our government.

We need to work harder to get affordable workforce housing by relaxing zoning for certain types of affordable housing.

2022-09-26
Previous Post: The 5 Biggest Technology Trends In 2023 Everyone Must Get Ready For Now
Next Post: DARIUS OKOLLA – The Myth That Is Plastic Waste Recycling in Kenya