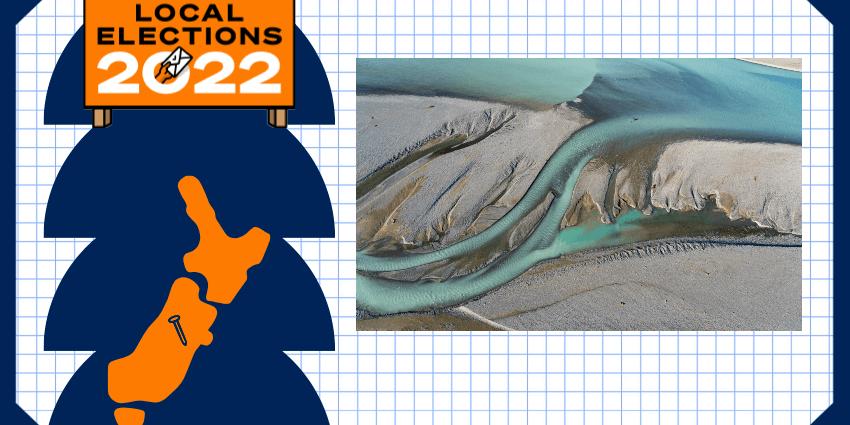 Environment Canterbury, Christchurch’s regional council, faces big questions of transport and water resources, with flooding and nitrate pollution from farm runoff a concern and significantly subsidised fares from next February.

Why is Canterbury the best place in the world?

Brynlea Stocks, a candidate who is running in the Central/Ōhoko constituency, says that it’s the natural beauty of Canterbury – big plains and big mountains – that appeals most to her. “I love that you can catch the bus to the beach but then it is also only a short car ride to the mountains. Canterbury is a big adventure playground for outdoor pursuits,” she told The Spinoff.

What is the contest?

Who is in the race?

Current councillor Claire McKay has a business background. She told The Spinoff that consulting with communities for ECan decisions is crucial. Another current councillor, Grant Edge, says his focus is on public transport, compact urban development, and reducing emissions. Shaun Lissington, a former operator of a farming business, says he is now retired with the time to engage in governance. Lissington says he wants to create solutions to protect the futures of our children and grandchildren. Rachel Vaughan has worked in local government and has a long association with North Canterbury. Vaughan’s candidate statement says she will be a “rational voice” for rural areas on council.

Joe Davies is part of left-leaning Christchurch local elections ticket The People’s Choice. Davies is one of the younger candidates at age 28, and says his priorities are biodiversity and climate action. Ashley Campbell, a science communicator, compares Canterbury’s earthquakes to the challenge of climate change, and says that mitigation and climate action will be vital. Current councillor Tane Apanui is focused on transport, and wants to introduce regional rail to Canterbury and improve coastal freight shipping options. Independent candidate John Knox has studied land use in elderly populations and says wise management of water resources for conservation and recreation is essential for Canterbury. An engineer who worked on catchment boards before they were incorporated into the regional council, David East says his experience with water infrastructure will be an asset to council and he wants to ensure Christchurch has clean water. He’s skeptical about adding flouride to the water supply.

Former Christchurch City Councillor Deon Swiggs lost his seat in the 2019 elections following accusations of inappropriate behaviour. He says that he is worried about upcoming local government reforms and wants to retain local decision making power. Businessperson Andrea Davis (Murray) says that providing Cantabrians with different commuting options and preparing for climate disaster, as well as improving the ECan and Christchurch City Council relationship. John Stringer, a classics teacher, wants to reduce rates, protect local water, and make public transport more flexible and affordable. Paul Francevic emphasises his experience in accounting, and says that this will help him keep rates low as a councillor. He also thinks that rail infrastructure needs to be part of Canterbury’s future. Part of The People’s Choice group and a current councillor, Craig Pauling says his priorities are strengthening regional plans and increasing funding for biodiversity and biosecurity projects.

Brynlea Stocks, The People’s Choice candidate and a consent planner, is one of the younger candidates at 23. Stocks has been involved in the West Melton Water Zone committee and says that she wants to educate more people about the council’s role responsibilities. Journalist and campaigner Genevieve Robinson says that protecting Canterbury’s coastal ecosystems and the endangered Hector’s dolphin, as well as looking after water resources more generally, are a priority. Greg Byrnes describes the state of water as “heartbreaking” and says that he wants to urgently reduce regional emissions and tackle the climate crisis with biological controls where possible. Lyndon Boyce (Boycey) has run a transport business in the past and says his priorities are improving driver conditions and transport efficiency to reduce rates. Murray Wiig describes himself as having “enthusiastic energy” and will work with staff to reduce rates and collaborate with other councillors as a team.

The People’s Choice candidate for the constituency, Chrys Horn has run as an independent in the past. Horn worked with Manaaki Whenua for many years, and says she wants to get people out of cars and work with local groups for local solutions. Sometime-Spinoff contributor James Dann ran unsuccessfully for Environment Canterbury in 2019, and has run as a Labour MP (also unsuccessfully) in 2014. His priorities are preparing for climate change, building a rail network and transitioning to more sustainable agriculture. Current councillor Vicky Southworth has voted for a reduction in bus fares while on council, as well as working on pest management and healthy rivers. Army veteran Paul Dietsche started a community tool-sharing initiative in Lyttleton and says that the council needs to focus on communication and sustainability.

A dedicated angler, Peter Trolove says Environment Canterbury’s water monitoring isn’t good enough. His sole focus is improving freshwater. Current councillor Ian MacKenzie says that one term on council has given him a sense of how much more work there is to be done, especially for sustainability. He emphasises his community service, governance strengths, and desire to deliver good value on rates. Current councillor John Sunckell says that he is a “politician second” and making sure flood mitigation for Ashburton and Selwyn is prioritised following floods. He says that “the biggest challenges in the coming term will be giving effect to the torrent of policy and rule changes coming at us from Central Government” [sic]. Matt Coffey says “don’t vote for me if you want [water] pollution to continue,” and that taking care of water is “not as hard as we’re making it.”

Current councillor Elizabeth McKenzie is a scientist who has begun a wallaby eradication programme as a councillor and wants to restore biodiversity for future generations. She wants to improve water quality and reduce emissions. An actor who has appeared on Shortland Street as well as theatre productions, Geraldine resident Roy Snow says that he wants to create sustainable solutions to problems facing south Canterbury, including investigating leeching from local dumps and ensuring water quality. Nick Ward says he has extensive experience with managing water systems and says that he will “enquiring mind” on Council, promoting transport and sustainability. Current councillor Peter Scott has been on Environment Canterbury for 6 years and says that his experience and relationships across the motu will help him to “navigate the challenges ahead” and ensure stable leadership on council.

What is at stake?

Earlier this year a piece of legislation guaranteed two Ngāi Tahu representatives membership and decisionmaking powers on the Environment Canterbury regional council; the two current Tumu Taiao roles, which have an advisory capacity, will be retired. The other 14 councillors are elected; there is no Māori ward.

Water is a particularly important issue across Canterbury. The council is responsible for water consents, which are vital for current agriculture carried out in the region, and has controversially revoked consents in the past. Massive rivers, including the Waimakariri and Rakaia flow from Kā Tiritiri o te Moana across the region to the east coast; many of these rivers are braided rivers which can change their course from year to year and can flood, which is expected to worsen with climate change. Nitrate pollution, caused by dairy farming, is getting worse in the region, and means some residents don’t have access to safe water.

Environment Canterbury councillors from this term approved a trial of subsidised bus fares, which will launch in 2023. The trial, which will last two years, will make all bus rides a flat $2 fee across the region, no matter the distance travelled, while under 25 year olds will have half price fares for $1. While bus drivers are paid at Living Wage, driver shortages have a big impact on service reliability. According to the pre-election report, 43% of Environment Canterbury’s budget at present is spent on transport and urban development.

The regional council is also responsible for emergency management. At present, the council is preparing for responding to climate-change related disasters, including flooding, with severe weather events in May 2021 and July 2022 causing significant damage. The Alpine Fault, which runs along the spine of the Southern Alps, is due for a major earthquake, much bigger than Christchurch’s 2011 earthquake; Environment Canterbury’s disaster management includes preparing for this potential event.

The race in a sentence?

Water on the mind.

The Environment Canterbury election is voted under the first past the post system. Voting papers will arrive in the days from September 16. The last day to enrol (for a special vote) is October 7. Your vote needs to be received by midday on Saturday October 8. Read more race briefings and other Spinoff coverage of the local elections here.