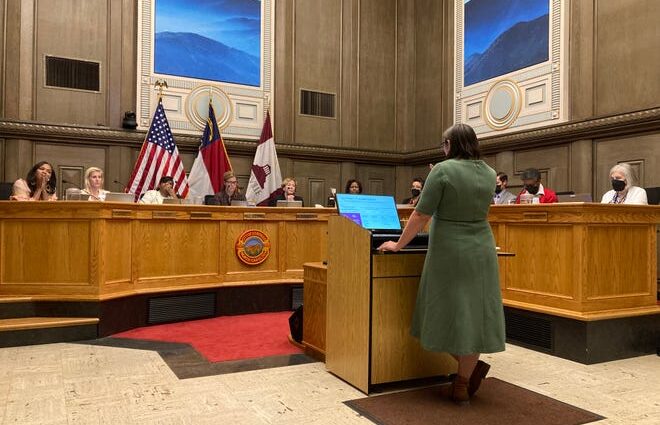 ASHEVILLE – Serious plastic regulation is on its way to Asheville following City Council’s Oct. 11 vote to prohibit plastic bags for curbside litter collection and begin public engagement around further regulation of plastic grocery bags at point of sale, with many conservationists calling for an outright ban.

The more than 20 speakers at City Council’s late-night meeting were also advocating for something else: speed.

It was the refrain of almost every speech. Voices strained with urgency as environmentalists, restaurant and business owners, area biologists and high schoolers alike called for City Council to take action now, rather than in a year when the new ordinance recommendation is proposed to come before them.

“What we’re asking for is not novel,” said Anna Alsobrook, watershed outreach coordinator with MountainTrue. She urged the council to take action on an outright ban by the end of the year.

Both the leaf litter collection revisal and the initiation of a city public input effort into a larger ordinance were passed unanimously by City Council.

Several council members voiced support to move as quickly as possible on a potential new ordinance, though Sustainability Director Bridget Herring cautioned that while city staff is ready to “take the baton,” they want to do a thorough job of public engagement and analysis, and not leave other climate justice goals by the wayside in the meantime.

“We’re trying to juggle the work on our plates to make it happen,” Herring said. “We don’t want to overpromise and underdeliver.”

The ban on plastic bag use for curbside leaf litter collection will not begin immediately. Instead, council’s motion directs staff to revise chapter 15 of the city code, with the proposed ordinance revision coming to council in December. Herring said the implementation date will be decided then.

The more complicated task is the direction for staff to commence an external stakeholder engagement process and analysis report regarding the potential regulation of plastic bags for restaurants, grocery stores and retailers, as well as disposable foodware products, such as Styrofoam.

This regulation was the subject of a draft plastic reduction ordinance presented to the Sustainability Advisory Committee on Energy and the Environment in May by MountainTrue, an Asheville-based conservation nonprofit.

The ordinance would ban use of plastic shopping bags and Styrofoam containers by restaurants, grocery stores and retailers.

Previously:Affordable mobile homes are disappearing in Asheville; code change could bring some back

Though prior iterations included language that would require businesses to charge a 10-cent fee for paper bags, the ordinance passed SACEE with the 10-cent fee made optional.

From there it went to the Governance Committee, made up of three city council members who recommended a gentler, phased approach — the first phase being the ban of plastic bags for curbside leaf collection and the second a public input campaign around further regulation of single-use plastic and ordinance development.

At the request of the Governance Committee, staff has proposed a more condensed timeline, accelerated by one year as compared to staff’s original September recommendation, Herring said.

In this timeline, a public input survey will be launched in February. Another six months are proposed to review and refine public engagement, with a recommendation coming to council in October 2023.

This is a year earlier than the initial timeline, which anticipated a single-use plastic ordinance could be presented to the city for approval and launch in fall 2024.

Herring said these bans are being considered to address pollution from single-use plastic, which she said is a problem in Asheville, and its regulation is a new area of concern for the city not included in current environmental plans or goals.

Susannah Knox, senior attorney with the Southern Environmental Law Center, was among the speakers, and urged Asheville to become the first municipality in the state to impose a plastic ban since a similar ban was implemented, and later repealed, in the Outer Banks.

She said plastic bags pose a “unique threat” to both the environment and public health, and noted that similar bag bans have been implemented and “thoroughly vetted” across the country.

Paper bags were first introduced as an option for curbside leaf collection in 2018. Following City Council approval of staff’s recommendation, plastic bags will be phased out entirely.

The revised ordinance will come to City Council for consideration in December.

This would eliminate 120,000 single-use plastic bags from the landfill annually, Herring said.

As part of the transition, a limited supply of paper leaf bags would be provided to residents at no cost.

This transition is estimated to cost $20,000 to include one-time purchase and distribution of 30,000 leaf bags to residents. Funding has already been identified within the Public Works Department budget.

Education and outreach materials have already been created and are scheduled to be deployed through the Communications and Public Engagement Department.

There could be an increased cost to residents currently using plastic bags for leaf collection of approximately 10 cents a bag.

According to the staff report, paper bags can be purchased in bulk, particularly during non-peak leaf season, for the same price or less than plastic lawn bags. Alternatively, residents may choose to make a one-time purchase of reusable containers of $20-$30 for infinite use.

Sarah Honosky is the city government reporter for the Asheville Citizen Times, part of the USA TODAY Network. News Tips? Email shonosky@citizentimes.com or message on Twitter at @slhonosky.

2022-10-12
Previous Post: Why is Integrated Development Environment (IDE) Important?
Next Post: Mastercard under the lense: all the latest news in one go