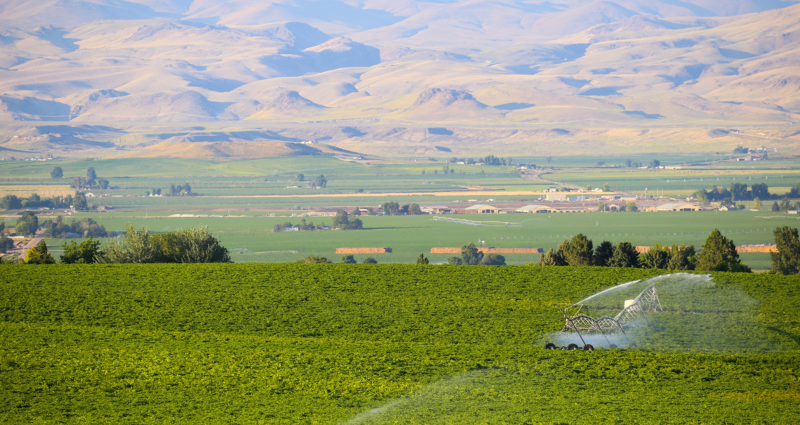 Farming is a tried and true American way of life, but that doesn’t mean innovations aren’t a big part of the agriculture industry.

On Friday, leaders from the agriculture industry, Bitcoin miners, elected officials, and tech leaders held an Environmental Innovation Summit in conjunction with Boise Entrepreneur Week at the Arid Club. The half-day event featured panels on cryptocurrency, the future of farming, and energy in Idaho.

Two panels at the event focused on the future of farming and how to use technology to make it sustainable, both for the farmer and the soil’s health.

How can technology be used in farming?

The three talked about the role of technology in farming and how companies need to work with what farmers need to be successful instead of trying to push expensive technology on them. Soltan, whose company makes wireless sensors that provide data on soil moisture to growers, said any new technology needs to be accessible to be successful in the market.

“It needs to be simple to operate, not because farmers aren’t intelligent, but because they have no time,” he said. “It needs to be affordable so they can actually afford to purchase it so it can deliver a return back to the grower. There’s great technology out there, but if it costs $50,000, that’s not sustainable.”

Schiermeier said using technology is what allows him to keep his operation running. As farms have gotten bigger due to consolidation and labor has gotten harder to find, technology is a way to bridge that gap and be more efficient with time.

“The labor is the hard issue,” he said. “It would be more manageable if I were in Boise, where I had a (labor) pool to pull from. But, I’m in Bruneau, and getting someone to come out and drive a tractor is difficult.”

Root said the cost of technology creates a gap between farmers who can afford innovative new tools and those who cannot. And as farming gets more complex, farms with deeper pockets will start to take over more and more of the industry. He said in the future, the agriculture industry needs to find a way to share information about innovation instead of leaving it up to individual farmers to adopt new ways of doing things on their own.

“The reality is we utilize a lot of fragmented information today when it comes to bringing in technology into an overall platform, and I hope in ten years from now this conversation is much more integrated and we can take the water and the labor and the tractor stuff and the seed varieties and the soil testing and have some place where we have one platform where we can monitor this incremental improvement on farms,” he said.

The move toward regenerative agriculture

Without investing in the soil, you can’t keep a farm going strong for decades.

Another panel at the Environmental Summit brought in three farmers who have built their businesses around regenerative agriculture, a more holistic view of growing food and livestock, and creating a healthy ecosystem on your farm to make it sustainable.

Debra Bruner and her husband Kyle used to run larger farming operations in Texas and then Wyoming, but as they got older, they wanted a smaller farm with a focus on relationship building. When they purchased their 10-acre plot of land in Idaho, it had been vacant; the ground was dry and covered in weeds. But they have seen the land come alive using a regenerative process of rotating cattle, chicken, and other products.

“For me and my husband, we’re very passionate about the equality of the land and what we bring to the table not only for ourselves but for our consumers and that we’re creating an environment that’s wildlife friendly,” she said. “We have more raptors, more birds, and they weren’t there when we moved there. We know we are building habitat.”

Diana Gooding, the VP of Gooding Farms near Wilder, said her family has been farming on their property since the 1940s with a heavy focus on hops, but over time the land had lost so many nutrients and was struggling to provide a good product. To save their farm, Gooding said they went “into the deep end with ten-pound weights” on regenerative farming by bringing in livestock to start rotating the land and rebuilding its nutrients.

Now, she said they are slowly working on healing the land, reducing their dependence on fertilizers, and trying to rebuild pieces of the over-commodified food system.

“We’ve learned a lot and really appreciate that it’s called regenerative farming instead of sustainable farming because who really wants to sustain a broken system?” she said. “We want to improve and have an additive mindset, rather than subtractive.”

Liz and Sean Cunningham, cattle ranchers from the Jordan Valley in Oregon, have been focusing on regenerative agriculture on their land for years and have a burgeoning direct-to-consumer meat sales business. Their business grew rapidly once COVID-19 hit, and consumers took a new interest in where their food comes from and how to connect to farmers.

As part of their growing business and the hope to invest in local food, the Cunninghams purchased Cliff’s Country Market in Caldwell to bring more whole foods to customers.

“We felt that was really important because it’s a very small family-owned grocery store, and most of the customers have been going there for the last 20 or 30 years and were intentional about learning where their food is coming from,” Liz Cunningham said. “Anyone who is from the area knew that store and knew it would go out of business, and we felt it was important to have that small store that isn’t hinged on these gigantic corporations.”