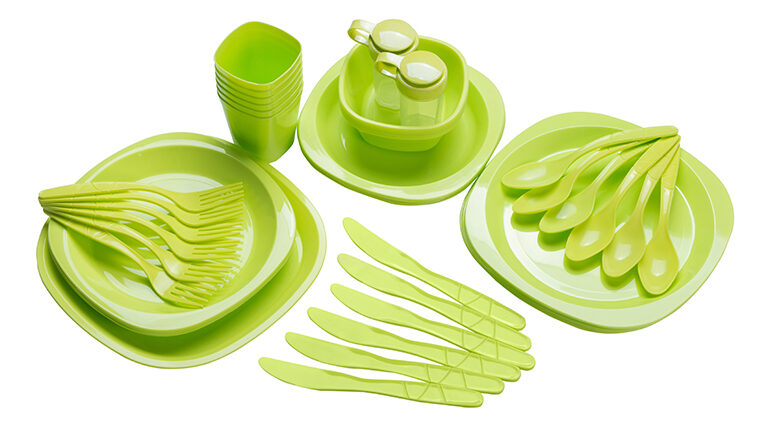 The problem with plastic pollution doesn’t begin with how it’s managed at the end of a product or package’s life. It begins upstream: this cheap-to-produce material is cranked out rapidly in massive quantities, and largely for single-use applications. More than 40 percent of plastic is designed to be used once, most which ends up landfilled, incinerated, or in oceans afterward, by industry accounts.

The gold standard “fix” for this plastics issue, say many environmentalists, entails going back to an old idea – older than the single-use concept itself—reusable containers. Think milkman who delivered milk in glass bottles, then swapped empty ones for refilled ones.

The low-hanging fruit in moving to reuse models is packaging that, like the old glass milk bottles, is easy to get back.  With that concept, Beyond Plastics, a national project aiming to cut plastic use, is reaching out to Meals on Wheels (MOW) programs. The team helps their staff transition to reusable containers. Targeting this home delivery program made sense because the service is already set up as a closed loop operation, says Alexis Goldsmith, national organizing director at Beyond Plastics.

“The same volunteers are going back to the homes to deliver the next meals. So, the idea is meals now typically served in single-use plastic polypropylene trays with clear film can be replaced with reusables,” she says.

Drivers can bring the dirty containers back to the program’s kitchen, most equipped with commercial dishwashers, where they can be washed and reused.

Goldsmith authored a guide, Choose to Reuse, that walks program facilitators through how to make the switch. And she works with them on tasks from determining type of container that would work best in their scenario to trying to help them secure funding.

There are upfront costs, mainly for the containers, but MOWs get their investment back within one to two years, tops, according to Goldsmith’s research findings. While the plastic throwaways are cheaper per unit, their replacement costs add up quickly. Reusables last for years.

What’s the best container depends on the food it holds. But most have compartments to separate sides, soups, desserts, and entrees, avoiding leaking or mixing. And often have lids attached.

“But whatever you are serving, there is a reusable solution. We can take factors like food type, budget, and dishwashing capacity and help programs figure out what will work before they invest in hundreds or thousands of containers,” Goldsmith says.

The Aging and Disability Resource Center (ADRC) of St. Croix County, Wis. has actually operated a reusable container program for over 20 years.

From 2013 to 2020, ADRC spent an average of $1,100 per year on reusable trays, and generated $10,483 per year in savings, according to Renea Aeschliman, St. Croix County Aging and Disability Resource Center program support associate.

There were adjustments, such as when the nonprofit changed suppliers and switched from two-compartment trays to three-compartment trays. And when they transitioned to a different delivery bag to fit the containers better.

But staff were easily convinced that reusables is the way to go.

“They see the benefit of the reusables versus the Styrofoam.  Styrofoam is flimsy and takes up more space in an already cramped area.

For volunteers, we show them how things are packed so they see both options.  They also see how much easier it is to give a participant a reusable container than Styrofoam.  The reusables seal nicely, and there is very little spillage in the carriers, which is a benefit for the volunteers and staff,” Aeschliman says.

The participants are not always as easy to sell on the idea.

“We unfortunately, have had to switch a handful or so from reusable to Styrofoam. They can either not wash the containers or have found other uses for them instead of returning them (bird feeder was the most recent).”

Educating meal recipients has helped. When she sets them up for home-delivered meals, she explains the process.

“Rinse them out to the best of your ability with hot, soapy water and set them aside for the volunteer to take back the next day.  I explain the container is microwave safe, so if they don’t eat it all right away, they can put the lid back on it and heat it up later,” Aeschliman says.

Goldsmith suggests, not only preparing recipients for the change to reusables, but attaching labels to containers reminding them to return. Or setting up systems where volunteers note when containers are delivered and picked up to be able to track if any are missing.

ADRC, St. Croix, moved away from reusables during the height of COVID, which proved to be an eye opener when it went back to reusables.

“[Prior to COVID] we did not realize how vital these containers were to our program, and our budget. Our nutrition program managers were happy when we reintroduced them, even though it meant more washing.

They knew participants would be happy to get a meal that looked good, was warm, and in a container that would not fall apart,” Aeschliman says.

Another organization, Lunch Break (unaffiliated with Meals on Wheels) is transitioning to reusables for its homebound program that delivers about 50 hot meals a day to local residents in need.

Its pilot launches in November with plans to roll out to all 50 homes by January.

“Once we have the homebound delivery completely implemented, we will assess the applicability to other [food] delivery services we provide as well as meals that we serve in our dining room,” says Phil Antoon, chief business officer, Lunch Break.

Kitchen staff tested samples from several vendors, and the nonprofit ultimately chose a three-compartment tray and a soup/salad bowl. And staff met with drivers from a few routes to explain the program and get their input on what will work in the field.

“We are going to test it soon with our clients, but the reception with our kitchen staff and delivery team has been overwhelmingly positive,” Antoon says.

Beyond Plastics’ guide, available to folks looking to launch similar reusable models, leverages a calculator to estimate metrics such as cost to replace single-use containers with reusables and timeframe to get investment back. It factors in variables such as cost of a dishwasher if an operation would need to purchase one; the amount of plastic waste reduced by switching; and conserved landfill space.

Calculations are based on the most common single-use containers used by MOW, but generally the metrics are comparable, Goldsmith says.

“I find government grants for recycling but not to support reuse, even though the waste hierarchy adopted by states and the U.S. Environmental Protection Agency is reduce, reuse, recycle,” Goldsmith says.

Allocating funds for community programs, easing the financial hurdle, will make implementation much easier, she says, adding, “I think reuse is the future. The sooner we [scale] reusable systems, the sooner we can solve the plastic pollution crisis.”