Can a luxury chocolate company save a Congolese forest? 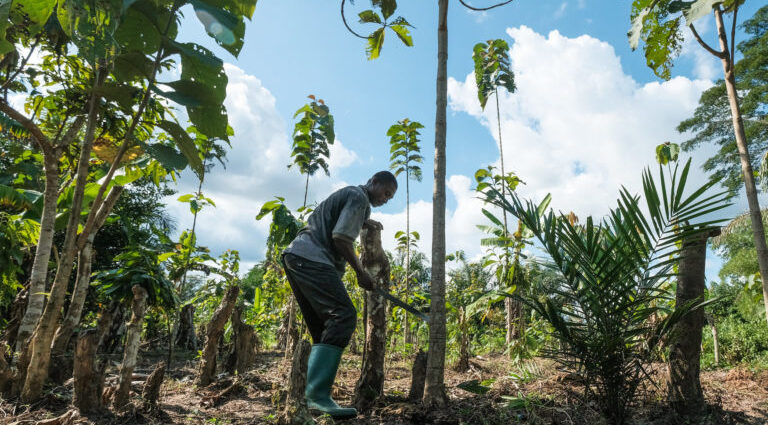 African cocoa plantations have seen massive growth in recent years on its path to help feed the world’s veracious appetite for a popular delicacy – chocolate. The Ivory Coast, the world’s largest producer of cocoa for chocolate, has seen nearly 94% of its forests replaced by cocoa plantations, according to the Mighty Earth Organisation. The trend is now spreading fast to the Democratic Republic of Congo (DRC), which also runs the risk of losing its primary forests to the cacao boom, says Gérome Tokpa, agroforestry expert at the Ivory Coast Earthworm foundation, an NGO specializing in sustainable agriculture supply chains.

Forest loss in the DRC has intensified over the past five years. In 2021, the DRC lost nearly 500,000 hectares (1.2 million acres) of primary forests, mostly due to small-scale agriculture and wood energy use, according to Global Forest Watch.

“Even though the cocoa industry in the DRC is still small, it’s very likely that it will go the same direction as the Ivory Coast,” says Etelle Higonnet, former campaign manager at the Mighty Earth Organisation.

This risk is increasing as people displaced by persistent armed conflict in the eastern DRC buy up new land in the North’s mostly virgin forests and set their sites on producing cocoa as a surefire way towards additional income. Vast swaths of forest are cleared for the beans.

“Every day there is a new plantation,” says Gaston Limba, a doctoral student in agronomic sciences at the University of Kisangani, and head of the cocoa tree program.

To this end, luxury chocolate company Original Beans says it has a solution. Along with a local NGO, Sustainable Agroforestry Development Initiative (IDAD), they aim to protect the mosaic of ecosystems around the renowned Virunga National Park, home to the critically endangered mountain gorilla. The bar representing this effort is ‘Women of Virunga’, made of organic cocoa planted in an agroforestry system that conserves trees and provides a sustainable form of income to women in the park’s neighboring villages.

The company has big names attached to the brand. Original Beans is used by world-renowned chefs such as Alain Ducasse, and Michelin star restaurants such as Core By Clare Smyth – previously owned by Gordon Ramsay.

According to an Original Beans development technician, the company’s luxury branding and price tag enable it to have more leeway in preventing deforestation by investing more in a sustainable supply chain and fairly paying impoverished producers who would turn elsewhere.

A recent study published in the journal Science Advances, indicates that significant amounts of cocoa enter supply chains through indirect sourcing, which comes with a higher and untraceable risk of deforestation.

However, some holes in the solution do exist. Agronomists and agroforestry experts have found that the company plants exotic trees in the buffer zone of the park and does not follow all sustainability recommendations.

Read more: To save chocolate’s future, ‘start now and go big’ on agroforestry

Original Bean’s model is based on importing and processing cocoa beans into rare, fair trade and certified organic chocolate. In this system, chocolate is not a cheaply mass-produced food involved in unsustainable and opaque supply chains, but a luxurious treat produced under controlled conditions.

Luxury chocolate factories have a leading role to play in ethical and sustainable supply chains, Etelle Higonnet tells Mongabay, as they have more flexibility, resources and monitoring capacity. For Original Beans, chocolate is classified as a luxury, not a staple snack.

IDAD, the Congolese NGO, works on the logistics side of the project by gathering communities, implementing sustainable practices and assuring fair production. The organization is funded by a small portion of the profits from chocolate sales, between $31,069 to $62,139 (between 30,000-60,000 euros) per year. After the cocoa is delivered to ESCO to be certified and exported for Original Beans, the company buys the beans at double the minimum price listed by Fairtrade.

The exact share of funding distributed to farmers was not shared with Mongabay at the time of publication.

Masika Mukonzo (40), a cocoa farmer with IDAD from the small village Kiniambaore in the Ruwenzori mountain range, says that before cocoa, her family’s income topped out at $20 per farming season, while today it is $100. A farmer produces 30 to 40 kg (66 to 88 pounds) per harvest season. In northern Congo, income from cocoa sales can reach $1,000 per year per hectare (about 2.5 acres), according to Limba of University of Kisangani.

“Thanks to cocoa, I can keep my home,” says Masika Mukonzo.

Today, IDAD operates in 29 villages spread over the two districts of Mabalako and Kalunguta, located in North Kivu near Virunga Park, an oasis of ​​relative calm in the persistent conflicts between rebels and the Congolese government. Villagers fleeing the war often take refuge in Mabalako, which does not suffer the same level of violence as local authorities control the area and it is located a safe distance from the park where armed militants take refuge.

The NGO’s agroforestry solution focuses on helping women, some of the most vulnerable people in the displaced communities.

“Women are the basis of stability in a community, much more than men”, says Hilde De Beule, the NGO founder.

According to the NGO, an approach that focuses on both the social and the economic side makes it easier to address environmental issues as they spill over into one another.

“Like a thief, I have to hide to come back to my own farm,” says Mukonzo.

October marked the fourth time that Mukonzo’s village has been attacked. Forced to flee more than 20 kilometers (12 miles) from her home, she returns in secret twice a week to harvest vegetables and tend to her cocoa trees. While waiting for a lull in the conflict, she works for other cocoa farmers to support her family.IDAD gave equal opportunities to all when selecting its beneficiaries, provided they owned their own land. Those who cannot afford to buy land, like Mukunzo, work for other farmers.

“They work either for money or in exchange for housing, food and clothing,” says Leoni Kahasa, 50, a native of Mabalako and a cocoa farmer with IDAD.

Forestry techniques under the microscope

To convince farmers to return to traditional agroforestry methods, “you have to show them that it works and not just ‘preach the good word,’” says Tokpa.

To plant cocoa, IDAD established an agroforestry model where 80% of the land is used for shade trees (including fruit trees), 10% for cocoa and the remaining 10% for shade shrubs. The area covers nearly 2,500 hectares (6,177 acres) of land in the national park’s buffer zone that farmers abandoned due of soil infertility.

To date, the NGO has planted nearly 300,000 trees, with nearly 1,111 cocoa trees per hectare according to Erick Racine, a rural development technician from IDAD and Original Beans. Consumers who buy the chocolate aid in his tree planting effort according to the “one bar, one tree” concept (one bar consumed, one tree planted).

This is a valuable selling point. “On the marketing side, even if organic chocolate is produced in very small quantities, that’s good,” says Higonnet.

However, according to forestry experts at the Centre for International Forestry Research and World Agroforestry (CIFOR-ICRAF), a good agroforestry system should follow three main principles: the farmer’s food security, the diversification of their income and compatibility with the local ecosystem. The last principle can be the trickiest.

It is also important not to plant invasive or exotic trees, say forestry experts, as they may compete with indigenous plants for resources. Two to three tree canopies of different heights are also needed, for birds different bird, monkey and animal species that nest and inhabit the forest. This requires either a method of planting in strata or alternating planting periods, parameters that IDAD does not specify.

According to the project activity report, IDAD only seems to plant exotic forests of the genus Grevillea robustaand Senna siamea, which are known to be invasive in neighboring Uganda. There are also Leucaena leucocephala in the plantation, a shrub native to Mexico which is recognized as an aggressive invasive plant in many parts of Africa.

The species was chosen as a beneficial food crop for farmers to produce additional income, but is among the 100 most invasive species in the world according to the IUCN, as it sits near Virunga’s protected ecosystem.

The plantations’ location in the buffer zone of the park could also pose a problem for animals, especially gorillas, whose attraction to the fruits leads them into the fields. Virunga is home to some of the last free-ranging gorillas on Earth.

According to Masika, he often sees macaques in his fields, but “animal management is ICCN’s responsibility,” says Racine.

Mongabay could not reach the organization for further comments on the tree species planted and the Congolese Institute for the Conservation of Nature (ICCN) which manages Virunga Park, did not respond to a request for an interview at the time of publication.

This article was first published here on Mongabay’s French page on Oct. 25, 2022.

Related listening from Mongabay’s podcast: We look at how agroforestry, an ancient indigenous technology that is increasingly being adopted by farmers around the world, can help solve many of the major environmental issues we’re facing, from deforestation and biodiversity loss to climate change. Listen here:

2022-11-16
Previous Post: What analyzing National Sword can teach us about optimizing US plastics recycling
Next Post: Why Ukraine’s victory is in the interest of environmental protection