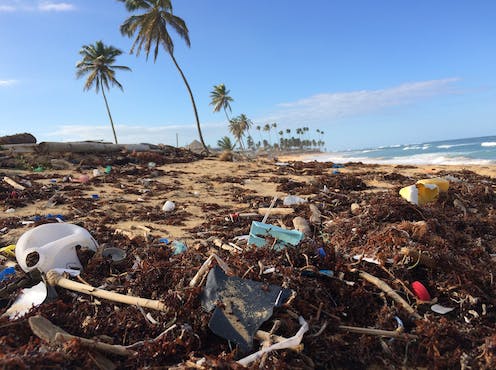 This week the federal government joined an international agreement to recycle or reuse 100% of plastic waste by 2040, putting an end to plastic pollution. But major obstacles stand in the way.

The most recent is the collapse of Australia’s largest soft plastic recycling program, REDcycle. The program was suspended after it was revealed soft plastic items collected at Woolworths and Coles had been stockpiled for months in warehouses and not recycled.

The abrupt halt to the soft plastics recycling scheme has left many consumers deeply disappointed, and the sense of betrayal is understandable. Recycling, with its familiar “chasing arrows” symbol, has been portrayed by the plastics industry as the answer to the single-use plastics problem for years.

But recycling is not a silver bullet. Most single-use plastics produced worldwide since the 1970s have ended up in landfills and the natural environment. Plastics can also be found in the food we eat, and at the bottom of the deepest oceans.

The recent collapse of the soft plastics recycling scheme is further proof that plastic recycling is a broken system. Australia cannot achieve its new target if the focus is on the collection, recycling and disposal alone. Systemic change is urgently needed.

Recycling is a market

Australia has joined the High Ambition Coalition to End Plastic Pollution, a group of more than 30 countries co-led by Norway and Rwanda, and also including the United Kingdom, Canada and France.

It aims to deliver a global treaty banning plastic pollution by setting global rules and obligations for the full life cycle of plastic. This includes setting standards to reduce plastic production, consumption and waste. It would also enable a circular economy, where plastic is reduced, reused or recycled.

The idea behind recycling is simple. By reprocessing items into new products, we can conserve natural resources and reduce pollution.

Unfortunately, the recycling process is much more complex and entwined in the economic system. Recycling is a commodities market. Who buys what is usually determined by the quality of the plastic.

Sitting in the middle of the chasing arrow symbol is a number. If it’s a one or a two, it’s high value and will most likely be sold on the commodities market and recycled. Numbers three to seven indicate mixed plastics, such as soft plastics, which are considered low value.

Sadly, it often costs more to recycle most plastics than to just throw them away. Up until 2018, low value plastics were exported to China. The reliance on the global waste trade for decades precluded many countries, including Australia, from developing advanced domestic recycling infrastructure.

What are the biggest problems?

One of the biggest problems with plastics recycling is the massive diversity of plastics that end up in the waste stream – foils, foams, sachets, numerous varieties of flexible plastic, and different additives that further alter plastic properties.

Most plastics can only be recycled in pure and consistent form, and only a limited number of times. What’s more, municipal plastic waste streams are very difficult to sort.

Achieving high levels of recycling in the current system requires the mixed plastic waste stream to be sorted into hundreds of different parts. This is unrealistic and particularly challenging for remote, low-income communities, which are typically far away from a recycling facility.

For example, throughout the developing world, single-use “sachet” size products are often directed towards low socio-economic communities and low-income families, who may buy most of their food in small daily portions.

Waste from small single-use packaging is notoriously difficult to recycle and is particularly prevalent in remote and rural communities which have less sophisticated waste management infrastructure.

Worldwide production and consumption of plastic per capita continues to increase, and is expected to triple by 2060. For many consumer-packaged goods companies, recycling remains the dominant narrative in addressing the issue.

For example, a study this year examined how companies in the food and beverage sector address plastic packaging as part of their wider, pro-active, sustainability agenda. It found the sector’s transition to sustainable packaging is “slow and inconsistent”, and in their corporate sustainability reports most companies focus on recyclable content and post-consumer initiatives rather than solutions at the source.

Although producer responsibility is growing, most companies in the fast-moving consumer goods sector are doing very little to reduce single-use plastic packaging. Special consideration should be given to products sold in regions lacking waste management infrastructure, such as in emerging economies.

The Australian government’s new goal to end plastic pollution by 2040 is encouraging to see. But putting the onus on recycling, consumer behaviour, and post-consumer “quick fix” solutions will only perpetuate the problem.

In the context of the global plastic crisis, focusing on recycled content is like putting a band aid on a bullet wound. We need better and more innovative solutions to turn off the plastic tap. This includes stronger legislation to address plastic waste and promote sustainable packaging.

One such approach is to establish “extended producer responsibility” (EPR). This involves laws and regulations requiring plastics producers and manufacturers to pay for the recycling and disposal of their products.

For example, in 2021, Maine became the first US state to adopt an EPR law for plastic packaging. Maine’s EPR policy shifts recycling costs from taxpayers and local government to packaging producers and manufacturers. Companies that want to sell products in plastic packaging must pay a fee based on their packaging choices and provide easily recyclable product options.

Currently, the burden of managing plastic disposal typically lies with local councils and municipalities. As a result, many municipalities worldwide are championing EPR schemes.

It’s the responsibility of everyone in the value chain to limit the use of single-use plastic and provide sustainable packaging alternatives for consumers. We need better product design and prevention through legislation.

The exciting thing is that businesses transitioning towards a more sustainable way of producing, distributing, and re-using goods are more likely to improve their competitive position.

Anya Phelan does not work for, consult, own shares in or receive funding from any company or organisation that would benefit from this article, and has disclosed no relevant affiliations beyond their academic appointment.

/Courtesy of The Conversation. This material from the originating organization/author(s) may be of a point-in-time nature, edited for clarity, style and length. The views and opinions expressed are those of the author(s).