Why Ukraine’s victory is in the interest of environmental protection 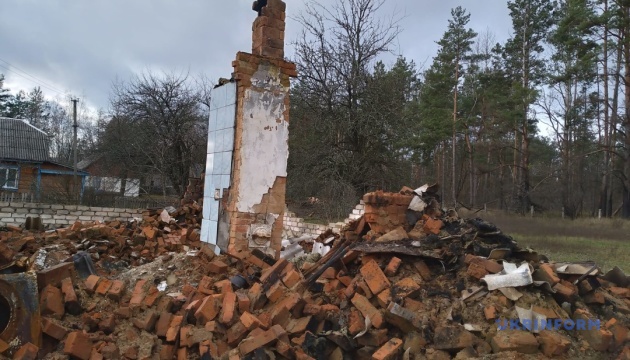 The Center for Strategic Communication and Information Security investigated examples of how the Russian war is affecting the environment.

Russia’s aggression against Ukraine continues in an era when the world is globalized as never before: informationally, economically, environmentally. The development of the Internet and telecommunications makes it possible to track the course of hostilities in almost real time — not only for Ukrainians, but also for millions of people in different countries. Maritime blockade of Ukrainian ports, capture, and destruction by Russians of the agricultural production base in several regions of Ukraine directly affect the lives of citizens of Ethiopia and India.

In addition, the intensity of hostilities in Ukraine, destructive weapons that are already used or can still be used, as well as violations of the security of high-tech Ukrainian enterprises are extremely affecting the environment. First of all, in Ukraine, but not only in it.

●          Bombing and other methods of modern warfare directly harm wildlife and biodiversity.

The Center for Strategic Communication and Information Security investigated examples of how these factors manifested themselves as a result of Russian aggression.

Ukrainian scientists have recorded the impact of the war on populations of wild migratory birds. However, dolphins were the most affected of all animal species in Ukraine.

“I was shocked, I never thought that I would see so many dolphin corpses on a wonderful beach, where there are usually thousands of people,” said Ivan Rusev, Doctor of Biological Sciences, Head of research department of the National Nature Park “Tuzlivski lymany.” “Before the war, we saw about 3 dead dolphins a year on the shoreline of our 44-kilometer park. But from the beginning of the war until the end of July, we found 44 dead dolphins on 6 kilometres offshore alone, which we have access to now. They died because of some unusual reasons, they looked unharmed from the outside.”

The scientist said that their special wooden building, where ecologists constantly alternate, was located at a distance of 49 kilometres from Snake Island. And when hostilities were in full swing around the island, their house “jumped” from the strong explosions. “We felt this powerful impact on the natural environment. All the birds, thousands of them, took off from the explosions. Some come back and some didn’t. When the bomb fell into the Black Sea — we even felt the shock of the building on the ground. You can imagine what a powerful sound wave goes underwater.”

According to the scientist, his colleagues from other countries of the Black Sea basin, in particular, from Bulgaria, testify to the large number of dolphins killed as a result of the war. Scientists believe that this happened from sonars of warships and bombing. Romanian environmentalists collected dead dolphins and performed a necropsy to find out the cause of death. More than 50% of the dolphins examined through computed tomography had the inner ear bones affected. This supported the hypothesis that exposure to sonars or explosions could be the cause. “There has never been such a powerful bombardment and such a powerful influence of sonars, which are especially strong on military vessels. Such a phenomenon as the mass death of dolphins happens for the first time in the Black Sea,” says Ivan Rusev.

Dead dolphins were discovered by scientists until mid-August, then such findings ceased. Ivan Rusev attributes this to the fact that the battles for Snake Island were in July, and later, thanks to anti-ship weapons, it was possible to push Russian ships with their sonars to Crimea.

According to Ivan Rusev, about 50,000 dolphins could have died as a result of the war. This is a fifth of all the dolphins in the Black Sea, according to the estimates of scientists, two years ago there were 253,000 of them.

The Prosecutor’s Office of Ukraine opened criminal proceedings under Article 441 of the Criminal Code — ecocide. For additional examination, scientists sent laboratory samples for research to Italy and Germany.

A study of Conflict and Environment Observatory and Zoï Environment Network, supported by the UN Environment Programme, as part of the monitoring of the environmental situation in Ukraine, recorded more than 570 incidents at 250 industrial facilities in Ukraine as of the end of August. About 60%, or 340 incidents, were the result of direct physical damage due to the war. These are the data excluding Russia’s terrorist attacks on civilian energy infrastructure in mid-October.

Experts warn that “high-intensity conflicts in highly industrialized countries, such as Ukraine, pose a serious danger to the environment and public health.” A responsible attitude to environmental security should have deterred the Kremlin from plans for a full-scale invasion. However, the leadership of Russia is clearly guided by a different motivation.

Moreover, the Putin regime regularly claims the alleged provocations of Ukraine, which can actually indicate its own intentions to blow up a “dirty bomb,” Zaporizhzhia NPP, Kakhovska HPP dam, or tanks with ammonia.

“Damage and disruption to industrial facilities can release pollutants into the air, soil and water, resulting in both short-term incidents and ongoing pollution problems. There have also been numerous reports of acute environmental emergencies, such as pollution following damage to storage tanks for nitric acid or ammonia. However, determining the true extent of contamination due to the current conflict is complicated by delayed access to the sites, as well as the presence of legacy contamination due to historically lax regulation and ageing of the sites,” the study says.

Another case of the war’s impact on the environment was shared on October 31 by Energoatom. Since ZNPP energy units would stop following capture of the plant by Russians, warm could no longer go into the cooling basin, resulting in the water cooling to +13 degrees. “If the temperature of water in the cooling basin does not rise in the near future, about a thousand tons of dead fish will be washed on the shore. Russia is a terrorist country, leaving behind ruins and scorched earth,” comment Ukrainian energy engineers.

Even in peacetime, the military consumes an enormous amount of dirty energy, contributing to global warming.

According to Scientists for Global Responsibility (SGR), cited by The Guardian, all the armed forces of the world put together and all industries providing their equipment account for 6% of global greenhouse gas emissions.

In February, Russia began military operations unprecedented in scale, which can be compared only with the Iran-Iraq war (1980-1988). There has not been a conflict of such intensity in Europe since the end of World War II.

The front line in Ukraine constitutes 2,500 km, of which active fighting takes place in areas stretching across 1,300 km. On both sides, hundreds of thousands of people are involved in the battles that have been going on for almost a year. The military consumes massive resources, including fuel, which is consumed at a higher rate during the cold season.

In addition to land, the war also continues in the sky and at sea. Deep rear areas are attacked by missiles and drones. A variety of military equipment, driven mainly by internal combustion engines, has become expendable in this war. It is constantly getting destroyed and replaced.

The confrontation, which immediately went quite far beyond the borders of Ukraine, destroyed the already far-from-impeccable cooperation in the world to minimize industrial emissions into the environment. The dependence of the largest countries, which have not escaped the crisis, on traditionally cheap but environmentally harmful resources is increasing. Expensive sanctions and counter-sanctions alongside the arms race force states to save money on other things, and the transition to green energy in itself is a massive expense. In addition, it requires coordinated action, and war is not the best time for global cooperation.

It is not only about Ukraine and its reluctance to surrender to the mercy of the aggressor. In Ukraine, Russia has essentially launched a new world war, revenge aimed at regaining the geopolitical positions lost with the collapse of the Soviet Union. This is a war against the West, but it is being waged at the expense of Ukraine, at the expense of the whole world and its environmental security in particular.

Putin’s Russia does not need peace; it needs Ukrainian resources (natural, economic, demographic) to restore its power and continue its expansion. The guidelines developed by Russian military educators for their wards are pretty clear about this: the subjugated Ukrainians must receive their own role in the further fight against the West.

On the other hand, it is possible to stop Russian militarism and predatory treatment of the environment here, in Ukraine. The world has already put great effort into destroying the aggressor’s hopes of victory. All that remains is to bring Russia to a well-deserved defeat — together. Ukraine has demonstrated its will to fight and readiness to effectively utilize Western aid.

Restoring the dolphin population, overcoming hunger in Africa, strengthening people’s faith in justice through punishment for unprovoked aggression against a sovereign state — all of this depends on Ukraine’s victory.