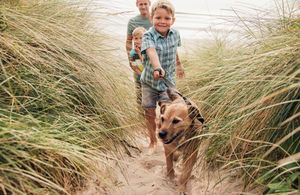 Whether its rambling along coastal paths, walking the dog or visiting coastal heritage sites, a new survey has revealed the overwhelming value the public feel the marine environment offers to their mental and physical health. However, around half of the 12,000 people surveyed also expressed concern about our seas, with over 80% of those taking part saying how crucial it is to protect our ocean.

Almost 70% of people see marine litter and plastic pollution as the greatest threats to our marine environment, with over half saying they believe regulating the use of single use plastics is one of the main ways we can address these issues. The public continue to take action at home, with roughly 4 out of 5 recycling more over the last 12 months, and 70% reducing their use of single use plastics.

The survey, published by Defra in collaboration with the Ocean Conservation Trust, the Scottish Government and Natural Resources Wales, sheds light on public awareness, knowledge and attitudes surrounding the marine environment.

“This survey highlights the immense value that the general public place on our ocean and marine environment as well as their willingness to take action to help to preserve it.

“As a government we are determined to continue to build on the protective measures we already have in place in our Marine Protected Areas alongside introducing further restrictions on single use plastic.

“We are also championing the goal of protecting 30 per cent of the global ocean by 2030 to help conserve our marine environment that is evidently precious to many.”

Roughly 4 in 5 people believe spending time in the marine environment results in good mental health; and over half found it to be a good source of social connection and a way to spend time with family and friends. Around 70% believe visits to the coast are also good for their physical health. England’s coastal path, being established by Natural England, will be the longest continuous coastal walking route in the world once complete, and a previous report from Natural England found that 97% of people felt refreshed and revitalised as a result of their visit.

The survey also shows that the public consider the ocean and marine environment as fragile resources that are highly valuable when it comes to education, general life enjoyment and overall wellbeing. Many of the respondents have carried out activities to protect the environment, including changes to lifestyle choices and signing petitions, and over 80% said they support the creation of Marine Protected Areas.

Nicola Bridge, Head of Advocacy and Engagement from the Ocean Conservation Trust said:

“As an Ocean conservation charity, understanding Ocean Literacy levels in the UK is vital to help us to protect the future of our Ocean. Someone who is Ocean literate is more likely to act in ways that support the health of our Ocean. At the OCT, our goal is to support as many people as possible to connect to the Ocean, becoming ‘Ocean literate’ and thinking about their impact on the Ocean in their daily choices.

“The results from this survey will be an important tool to help us shape our public engagement and education programmes. It is uplifting to see more and more people taking action to increase their positive impact on the Ocean, which is a great baseline for us to work from.”

In June this year, the UK Government joined other world leaders at the UN Ocean Conference to announce new initiatives to protect the global marine environment, marking a significant step forward in our mission to protect at least 30% of the global ocean by 2030. At home, the UK has a strong track record in marine conservation, with 374 Marine Protected Areas (MPAs) already in place. The comprehensive network of MPAs provides protection for just over 38% of UK waters, and in England, nearly 60% of the 178 English MPAs are already protected from damaging fishing gear, with the aim to have all 40 offshore sites protected from damaging fishing activity by 2024.

The UK has also been a leading voice in attempts to tackle marine plastic pollution, co-sponsoring a proposal to prepare a new treaty and being a founding member of the High Ambition Coalition to End Plastic Pollution, a group of more than 30 countries calling for a target under the treaty to stop plastic from flowing into our lands and ocean by 2040. This builds on the UK’s world-leading efforts to tackle plastic pollution at home. We have so far introduced a plastic packaging tax on packaging that contains less than 30% recycled plastic, a ban on microbeads in rinse-off personal care products, and measures to restrict the supply of plastic straws, plastic drink stirrers and plastic-stemmed cotton buds.

This report follows the first meeting of the UK Dialogues on Ocean Plastics this month which marked a major step in developing a legally-binding global treaty that aims to end plastic pollution by 2040.

It also comes shortly after COP27 where the UK Government has continued to push for progress on ocean commitments, including announcing an additional £12 million to the Ocean Risk and Resilience Action Alliance (ORRAA) to help protect our ocean and vulnerable coastal communities.