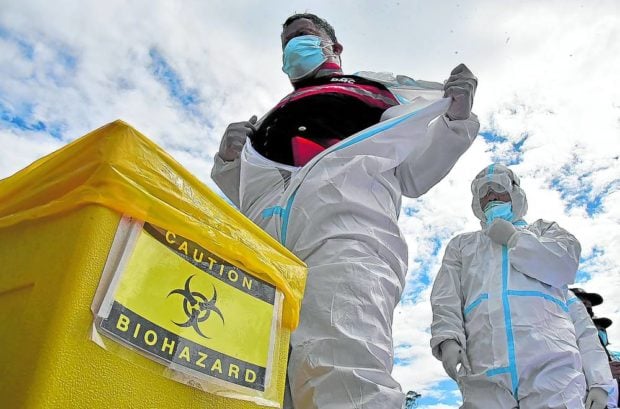 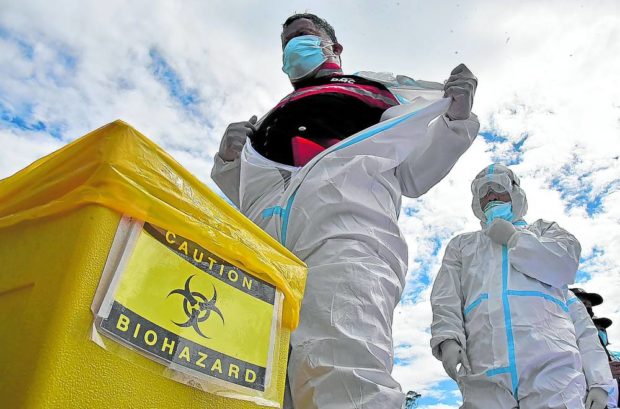 DISPOSAL CHALLENGE Personal protective equipment, like these biohazard gear worn by workers during Friday’s Mine Safety and Environment Conference in Baguio City, go a long way toward keeping the human body safe from disease but they leave a huge plastic footprint and take a toll on the environment. —EV ESPIRITU

SINGAPORE — There’s a ticking time bomb in Philippine hospitals and it’s made of plastic.

Every year, the country produces 2.15 million tons of plastic waste, more than a third of which leaks into the open environment, while another third is thrown into landfills.

Only 345,000 tons of the nonbiodegradable material is kept in homes and less than half of that is recycled, according to Health Care Without Harm (HCWH), an international nonprofit with offices in Manila, Brussels and Washington, D.C.

That problem became magnified in hospitals at the height of the COVID-19 pandemic, as doctors, nurses and other medical staff had to wear all manner of single-use plastics, from head covers and goggles to coveralls and shoe protectors.

Health protocols require that personal protective equipment (PPE) be discarded after each use. This led to truckloads of plastic for disposal at tremendous cost.

At St. Paul Hospital in Dasmariñas City, Cavite province, an average of 219 kilograms of waste was produced every day—almost three-fourths or 72 percent of that volume being plastics, according to Ramon San Pascual, HCWH executive director for Southeast Asia.

Multiply that by 1,800—the number of hospitals in the country—and one can imagine the enormity of the crisis and its impact on both public health and the environment.

But there are solutions.

On Nov. 9, San Pascual presented a number of interventions on the plastic problem facing health systems at the 7th World One Health Congress held at the Sands Expo and Convention Center in this city-state.

He centered his talk on four practical and doable actions that any hospital management could perform on its own:

The use of washable or customized reusable PPE with silver taffeta cloth; a COVID-19 waste audit, with proper segregation of PPE after their doffing and reprocessing; a digital waste registry, or intensified waste management with color-coded trash bins; and sustainable procurement, like one with a mechanism for the return of used plastics like dialyzers and dialysis tubings to their suppliers.

San Pascual said it wasn’t even his group that proposed these interventions.

“Innovation was generated by the hospitals themselves, some … in partnership with us, as a result of the sheer situation that emerged from COVID-19,” he said in an interview with the Inquirer.

“When COVID … happened in March 2020 then expanded and expanded, initially the hospitals had a crisis of shortage of PPE,” he recalled.

“So they began looking for alternatives. They saw they can use reusable, washable PPE, and at the same time, it won’t contribute to pollution,” he added.

This was what St. Paul’s Hospital in Iloilo City did.

“What is good about St. Paul’s is they had been working with us as a ‘clean hospital’ prior to COVID,” San Pascual said about the 265-bed tertiary hospital managed and owned by the Sisters of St. Paul of Chartres.

According to him, the hospital “realized early on that there’s too much use of plastics. They’re paying so much for hauling and disposal [which have caused] harm to the environment.”

By customizing PPE to become washable, the Iloilo hospital was able to save tens of millions of pesos in a matter of months.

From April to December in 2020, St. Paul’s saved P65 million from dispensing with disposable PPE. The hospital also saved 33.7 percent from waste expenses through recycling between January and November that year.

San Pascual, in his presentation, also cited the Cahaya Qalbu Clinic in West Java, Indonesia, which came up with its own system of reducing plastic waste through washable PPE.

The outcome was even more dramatic—a 90-percent reduction in medical waste and, in turn, a 90-percent increase in savings.

“Without talking to each other,” the Philippine and Indonesian hospitals arrived at similar solutions and achieved the same goal, San Pascual explained to the Inquirer.

HCWH also partnered with the Department of Health (DOH) in other interventions—particularly the COVID-19 waste audit and the registry of discarded waste.

The DOH asked the group to perform the audit on five pilot hospitals, which San Pascual said “had no choice” but to comply.

Yet the audit, while compulsory, turned out to be “very helpful” to those hospitals, he said, as he noted how they realized soon enough that “not everything should be considered infectious,” and that “protecting public health is also about protecting it from plastic pollution and this can be done side by side.”

But encouraging those endeavors was not easy, he admitted.

“We’re dealing with the bureaucracy in DOH, which is complex,” San Pascual said, adding that, ultimately, HCWH wanted “to encourage DOH … to mandate hospitals to look thoroughly at their waste management system and to include sustainable solutions.”

The hardest challenge for these institutions is “overcoming fear,” he said.

Most doctors and nurses were not comfortable with the idea of multiple-use PPE, while many among the public had also become too cautious amid the surge in cases early during the pandemic.

But San Pascual said health-care workers must reject the notion that hospital gear should be used only once.

“You don’t need to overuse gloves. Infection can be prevented with a simple washing of hands,” he said.

“What we observed in many hospitals not only in Asia but [in] different parts of the world … is that the biggest contributor to plastic waste is the use of medical gloves,” he pointed out, adding that a typical doctor or nurse may discard as many as 10 gloves a day.

“It’s disposable, single-use and made up mostly of plastic,” San Pascual said. “Imagine the environmental pollution that is creating.”

He said it’s important that not only middle managers and staff become reoriented in the use of their plastic articles “but also the top leaders” as well of any hospital.

San Pascual credits the management of hospitals like St. Paul’s in Iloilo and Indonesia’s Cahaya Qalbu Clinic for being more open to “an easy exploration to find alternatives.”

“What makes them innovative … is their understanding and acceptance of the problem,” he said.

Note: This solutions story was written for the Journalism in the Age of Pandemics 2.0 program supported by World Association of News Publishers and Temasek Foundation.