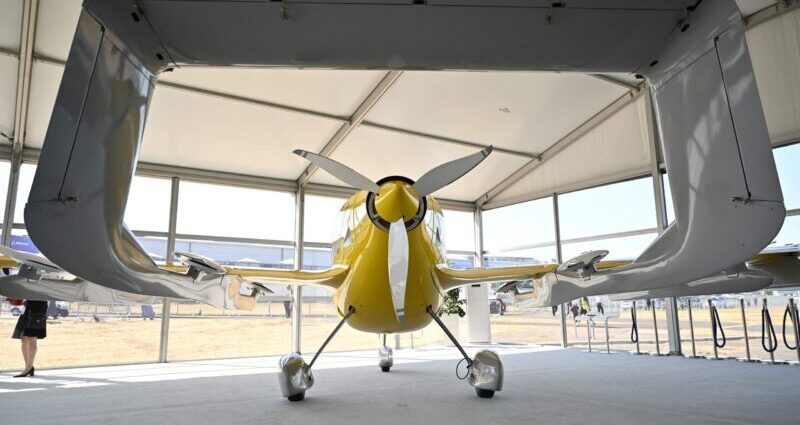 As world leaders gathered in Egypt for the 27th United Nations Climate Change Conference (COP27) to discuss current and future environmental policies, the progressive electrification of the aerospace and defence industry illustrates the opportunities and challenges faced by armed forces worldwide in attempting to reduce energy emissions and waste.

GlobalData forecasts that electric vehicles will account for 31.1% of total light vehicle production by 2035, a 27.9% increase over the figures for 2020. In written evidence to the UK Parliamentary Committee on Defence and Climate Change, the Ministry of Defence (MoD) stated that half of current government greenhouse gases were from defence, with aviation accounting for two thirds of such emissions.

Steve Murray, vice-president of strategy and marketing at Thales, sees tackling climate change as inextricably linked to defence. “In order to be able to decarbonise, you first need a foundation of national stability and security.

“Dramatic changes to the climate increase the chance of hostilities over access to environmental resources, like water and crops, but as extreme weather events become more common, defence will also have a greater role to play in providing humanitarian assistance.”

Murray believes that products and services within the defence industry also have a role to play by incorporating eco-design principles into Thales products and seeking environmental applications for existing products, such as trialling military-grade surveillance cameras on unmanned surface vessels from an autonomous counter mine programme so they can inspect wind turbine blades as they rotate.

“For organisations working in the UK with the Ministry of Defence and for His Majesty’s Government, you are working within a framework that is driving towards net zero in less than 30 years. The recently released Defence Capability Framework for the first time, gave the defence industry a very clear indication on future capability acquisition plans from the MoD.

“There is an opportunity to go further and link up the capabilities required to their Climate Change & Sustainability Strategy.”

Among drivers of electrification in the defence market, modernisation and concerns over energy security have been key. “These concerns have increased the pressure on defence companies to develop novel solutions with more eco-friendly credentials without sacrificing critical capabilities,” says Tristan Sauer, defence analyst at GlobalData.

Sauer points to the military armoured vehicles market as a prime example, with nations investing in hybrid-electric propulsion systems to improve energy efficiency and reduce their logistical footprints.

Hybrid-electric propulsion vehicles have been the focus of programmes in the US and the UK, with the US Army developing such platforms as the new M1A2 Abrams X main battle tank and the JLTV light armoured vehicle. The British Army has companies including Supacat, General Dynamics and MAGTEC collaborating to produce hybrid-electric variants of the Jackal HMT and Foxhound armoured vehicles.

Boeing, in written evidence to the UK Parliamentary committee on Defence and Climate Change write in September of this year that they had invested £370m in the Wisk joint venture focused on electric Vertical Take-off and Landing (eVTOL) platforms.

“Assuming that green hydrogen and a low carbon electricity grid is available, both technologies offer environmental benefits and potential operational gains in terms of signature reduction, “ wrote Boeing. However, the company was clear about limitations from the time frame for implementation: “The reality is that electric and hydrogen will not be suitable for all types of platforms within the near to medium term (next 30 years).”

“There are clear areas where we can establish some quick wins and pick up the pace,” says Murray, pointing to Thale’s use of advanced flight simulators to reduce the need for live flying by 90%. Quantum computing, “frugal A.I.” and edge processing are among emerging technologies he identifies that will reduce the environmental impact computing in defence, lowering electricity use and reducing inefficiencies. Thales is establishing carbon action plans that will see a 35% reduction in our indirect carbon footprint by 2030.

“It remains clear that the global industry has seized the initiative as the defence market undergoes this shift to a more sustainable future.”

Sauer recognises the considerable technological advancements underpinning the defence industry’s environmental policies. “Global concerns over the impacts of climate change are driving innovation throughout the defence industry as militaries continue to pursue the electrification of vehicle fleets, with numerous major aerospace and defence primes investing proactively in emerging technologies.”

Naval equipment designers Saildrone has developed uncrewed surface vehicles (USV) powered by renewable solar and wave energy. Saildrone’s wing technology enables the USV to complete missions with a duration up to 12 months without the need for refuelling or returning to land for maintenance, with an average speed between 2-6 knots, allowing it to reach most ocean locations within 30 days.

“Though the integration of such capabilities into the military apparatus remains a challenge for the political institutions themselves,” says Sauer, “it remains clear that the global industry has seized the initiative as the defence market undergoes this shift towards a more sustainable future.”

“If you can work with your customers,” says Murray, “to agree clear roadmaps, aligned both to domestic needs and export opportunities, then you build up a virtuous circle which allows businesses to invest with greater confidence, making them more resilient and able to sustain and expand their skill-base. Which, ultimately, makes the UK more secure, and gives it a basis from which to decarbonise.”

2022-11-21
Previous Post: Tencent Showcases Initiatives to Tackle Climate Change at COP27
Next Post: How plastic surgery saved a diabetic after COVID and black fungus ate into her face