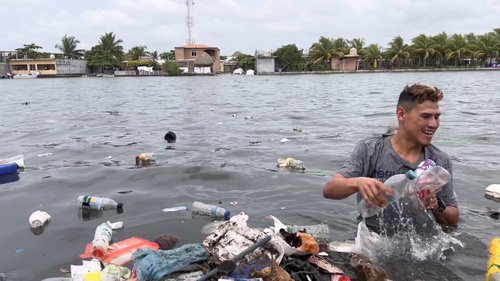 Porter said Repurpose Recycling aims not only to remove plastic from the oceans, but to provide steady jobs and opportunities to those experiencing poverty in developing nations.

After serving a mission in Guatemala and participating in a humanitarian mission to Fiji, Porter said he was interested in ways he could give back to those communities, thus creating Repurpose Recycling during his years at BYU.

“I saw a big issue with waste and started thinking of ways to solve that and poverty — to see if there’s a way to turn trash into treasure,” he said.

Porter said the BYU Ballard Center motivated him to start the business after he learned about their grant program. He said creating a business proposal was more difficult than he expected, but Ballard Center resources like the Social Venture Academy encouraged him to keep going.

Porter said he settled on a “gig-economy collection,” which functions similarly to Uber or DoorDash. Members of the community near collection sites in Guatemala can collect plastic at times that work best for them, and Repurpose Recycling employees pay them for each pound. The company also works with schools, churches and businesses to set up collection points so people can bring plastic from home in exchange for tuition or donations, according to their website.

The plastic is then transported to Repurpose Recycling’s recycling facilities, where it is sorted and processed before being sent to other recycling plants to remade it into new products.

Repurpose Recycling offers plastic offset credits to its corporate partners in order to certify them as plastic-neutral or plastic-negative. Companies can purchase credits or offer a “one-pound promise” to their customers, where one offset credit is purchased for every product they sell. Each plastic credit is the equivalent to one pound of ocean plastic.

About eight million tons of plastic waste are added to the ocean every year, according to National Geographic. Repurpose Recycling reports that 3.2 million pounds of that plastic comes from the Maria Linda and Achiguate rivers in Central America.

According to a press release announcing their collaboration with Sami Sacha Flowers, Repurpose Recycling has removed over 131,000 pounds of ocean-bound plastic from the environment and hopes to remove 1 million pounds by the end of 2023.

Sami Sacha Flowers is a co-op of flower farms located in Ecuador. Noam Temkin, one of its founders, said the company partnered with Repurpose Recycling because they wanted to offset the necessary use of plastic in their products.

“We need plastic in so many different things,” he said. “Not just in food packaging, but in medical goods.”

Temkin said removing plastic from oceans and rivers and doing something good with it after is gratifying. “That’s where the beauty of it is,” Temkin said.

Upcycled plastic can be compressed and made into products such as building blocks for homes, Temkin said.

Repurpose Recycling also announced an upcoming collaboration with fellow BYU startup Recyclops, which provides recycling services for those who do not have access to convenient recycling.

Recyclops CEO Ryan Smith founded the company after he moved into an off-campus apartment in Provo that did not have recycling services. He did some research and found his case was not unique — approximately 60% of American households do not have access to government recycling programs, according to Smith.

“I felt guilty not recycling and knew I wasn’t alone,” he said. “So I decided to do something about it.”

Recyclops functions as a subscription-based service. For a minimum of $12 a month, Recyclops provides curbside pickup for recyclable material like plastic, cardboard, aluminum, tin and paper.

Recyclops’s partnership with Repurpose Recycling will function as an add-on option to Recyclops subscriptions and will be available in 2023. Smith said it would give students the opportunity to make a difference in cleaning the world’s oceans without having to spend much money or leave the comfort of their homes.

“This is an awesome way to give,” Smith said. “It’s so affordable, but it’s a high impact.”

Porter, Temkin and Smith said they encouraged BYU students to take steps to either limit or offset their plastic waste. Temkin said Repurpose Recycling has several internship opportunities for those interested in getting involved.

“Since we’re a startup, there’s tons that needs to be done all the time,” he said. “Anybody passionate about the environment, ocean plastic, helping people in poverty, is more than welcome to reach out to us.”

Smith said he looked forward to the upcoming collaborations and the futures of both companies.

“We are barely scratching the surface, and we want to do so much more,” he said.