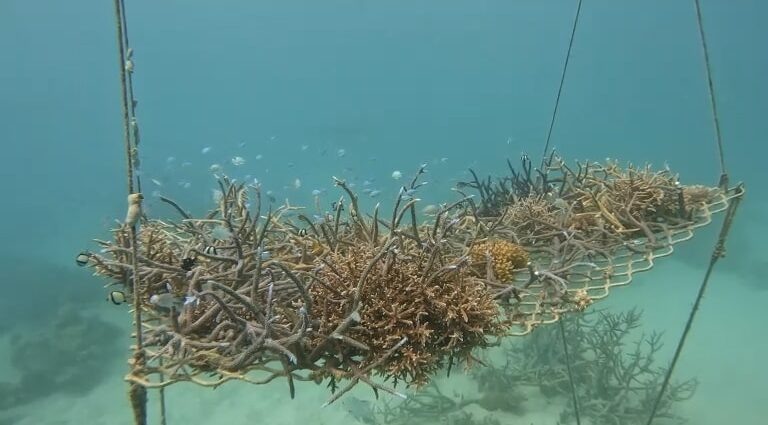 Underwater gardens, where coral fragments are grown, are among the efforts to help protect reefs from climate change

The world off Australia’s northeast coast is magical yet besieged, a place of stunning colors in good times but ghostly white in bad ones. The bad have happened repeatedly in recent years as warming seas tied to climate change have bleached the vast coral ecosystem below.

But through a symbiotic collaboration between five tourism companies and marine scientists at the University of Technology Sydney, “coral gardening” in underwater nurseries is trying to help preserve the country’s famed Great Barrier Reef.

Divers for the companies — all intimately acquainted with the reef and, like so many businesses, dependent on its vitality — scour the seafloor. There they collect broken pieces of coral and attach them to submerged frames on which the fragments can recover and grow. Ecologically minded tourists pay to see the unusual attraction.

It’s a strategy that master reef guide Russell Hosp says is aimed at giving “Mother Nature a little bit of a boost.” Some 30 gardens are currently being cultivated, and the healthy coral segments that thrive on their artificial underwater structures are then transplanted to damaged areas of the reef.

The Coral Nurture Program is just one of numerous projects along the Queensland coastline, including one, run by the Reef Restoration Foundation, that just saw its planted coral spawn for the first time. Together, these efforts aim to transform the reef by making it more resilient.

This month’s COP27 conference in Egypt discussed adaptation solutions for coral nations. Peter Thomson, the U.N. secretary general’s special envoy for oceans, told a panel that he was a convert on the effectiveness of programs like coral nurseries after seeing the results in his native Fiji.

The Great Barrier Reef has the most coral in decades. Global warming could reverse it.

“Don’t accept the idea that coral reefs are going to be extinct,” he said. “We’re going to refuse that future.”

None of the progress can overcome unchecked global warming, however. “A 1.5-degree world is really a death knell for reefs,” warned Carol Phua, who leads the World Wildlife Federation’s Global Coral Reef Initiative.

The loss would be tragic. Corals are arguably the strangest of the many bewildering life-forms that can be found in the world’s oceans, simultaneously animal, vegetable and mineral.

The animal is the polyp, a transparent, tentacled creature related to anemone and jellyfish. Coral polyps have squishy bodies but have evolved the miraculous ability to secrete calcium carbonate — the same material as limestone rock — as protection. These calcium carbonate barricades make up the visible architecture of a reef.

Inside the polyp’s tissue are a living algae called zooxanthellae. It’s these single-celled organisms that lend reefs their famous rainbows of color. And, more importantly for the polyp, the algae provide food for their hosts, turning sunlight into proteins, fats, and carbohydrates through photosynthesis.

There are billions of coral polyps, containing tens of billions of zooxanthellae, hiding within the hard structure of the Great Barrier Reef. Every newborn polyp absorbs algae and secretes rock, adding infinitesimally to an ecosystem that has been growing for 20,000 years.

The problem, said Emma Camp, the Coral Nurture Program’s co-founder and a university marine biologist, is that “corals have a narrow environmental niche, or range, that they typically like to survive.”

Coral algae can only survive in warmer waters. But when the temperature gets too warm, the algae begins emitting a toxic substance instead of food, which the polyp instinctively and protectively ejects into the ocean.

The result is coral bleaching, and the stark images of reefs after an event show what corals look like without algae inside. Unless the water temperature drops and the algae can safely return, the polyp starves, and the reef remains colorless.

The Great Barrier Reef has experienced four bleaching events in various sections since 2016. Even when a coral colony survives, the stress takes a toll. The coral needs time to recover, and multiple bleachings in a short period are more likely to be fatal. Some species cope with heat better than others, but when the most vulnerable species die, the reef’s diversity suffers.

Coral Nurture participants have planted nearly 77,000 corals in the program’s four years. Camp acknowledged that in comparison to the reef’s vastness — the equivalent length of Florida to Maine — the number is small. “Where we’re at with most current restoration efforts is that they’re local,” she said.

That focus is something Alan Wallish appreciates. He’s a tourism operator in Cairns who has spent several decades on the reef, and his business, Passions of Paradise, is among the five guiding companies partnering with the university scientists. The idea, he said, is “about looking after your own little patch.”

The other initiatives underway to nurture the reef run the gamut. Eye on the Reef, headed by the Great Barrier Reef Marine Park Authority, enlists the masses of divers who sightsee underwater to collect data while they’re there. A “Coral IVF” project, led by Southern Cross University, gathers coral sperm and eggs and fertilizes them in an ocean pool, depositing the larvae in degraded regions.

Indigenous rangers of the Mandubarra people are also involved, working with the recreational fishers group OzFish and researchers from James Cook University to plant sea grass meadows. At a lab near Townsville, specialists at the Australian Institute of Marine Science experiment with a biodegradable, molecule-thick film that may block heat from entering the ocean.

Climate change remains the big caveat for all these initiatives. Human intervention projects “are going to be essential” in coming decades, said Scott Heron, an environmental physicist with the ARC Centre for Excellence for Coral Reef Studies. But they will be most effective only if they advance in tandem with a rapid decrease in greenhouse gas emissions.

“We need to be addressing climate change, and the causes of climate change in a policy-coherent way, so that we’re not putting a blowtorch as well as a hose onto the fire,” Heron said.

Despite the odds, Hosp is actually pretty optimistic as he guides visitors on the Great Barrier Reef. “The work we’re doing on the reef is in conjunction with work being done in the Antarctic, and in Africa, all over the world,” he said. “There’s this concerted effort to try and fix the problem in as many ways as we can.”

“Quite honestly,” he added, “I think it’s a little bit early to tick the box and say the reef, or any other ecosystem, is a lost cause. Because it’s absolutely not.”

Sign up for the latest news about climate change, energy and the environment, delivered every Thursday

2022-11-22
Previous Post: Conservative Environment Network: the government must attract green investment, not deter it
Next Post: What happens when humans meddle with nature? | Environment