Should companies with animal mascots pay for species conservation?

November 22, 2022 — One lazy summer day, film writer and director Christopher Nelius was watching a cricket game on TV at home in Sydney when a commercial for a local telecommunications company caught his eye. A realistic, animated family of elephants appeared on his screen, exuding feelings of warmth and homeliness ostensibly associated with the product being advertised: phone data.

But the ad made Nelius feel uneasy, he recalls. Given that wild populations of elephants are dwindling, it seemed untasteful to use their images for profit — and to do so without any benefits to the elephants. While advertisers would have to pay to use Leonardo DiCaprio’s image to sell a watch, for instance, animals don’t get anything in return for their commercial appearances. “I thought, ‘Imagine if there was a world where those brands give something back,’” Nelius, who is a director at an Australian production company called FINCH, said in a 2019 interview.

In 2018, that vision became a real possibility when the United Nations Development Programme (UNDP), FINCH and other companies launched the Lion’s Share Fund, an initiative whereby businesses using animals in their marketing can contribute a small percentage of their advertising budget toward conservation. The fund brought a concept to life that had long floated in the scientific literature: a royalty fee on using images of iconic species to help protect them. Even such small contributions from the private sector, some scientists have written, “could revolutionise funding for conservation; and just such a revolution is needed to reverse the current tumble to extinction.”

While a handful of companies — like the food behemoth Mars, fashion brand Gucci and luxury goods maker Cartier — participate, the fund is still short of its financial goal of US$100 million a year. Nevertheless, Ana Nieto Serradilla, the head of species conservation action at the International Union for Conservation of Nature, thinks the fund is a great idea. “The more funding invested in conservation the better,” she wrote in an email. “It’s a creative way to remind all of us that many of the iconic animals that we see on billboards, in magazines, and in our social media feeds every day are threatened with extinction, along with many less charismatic species.”

From Kellogg’s Tony the Tiger to Jaguar cars and eye-catching wildlife imagery in commercials, charismatic animals have long been popular in advertising due to the strong emotional responses they elicit and their symbolic, cultural value, said Barbara Phillips, a now-retired professor of marketing at the University of Saskatchewan in Canada, in a 2019 interview. A prowling big cat, for instance, is shorthand for speed, power, grace and beauty — the very features that luxury car manufacturers seek to project. According to the UNDP, of the hundreds of billions of dollars’ worth of advertising campaigns run every year — US$781 billion in 2021 — the marketing research company Nielsen estimatesthat a fifth feature animals.

This massive commercial presence of charismatic creatures could be harming those animals in the wild, according to research published in 2018 by conservation scientist Guillaume Chapron of the Swedish University of Agricultural Sciences and his colleagues. The study found that for most of the following animals, only half of adults, schoolchildren and university students surveyed identified lions, tigers, elephants, giraffes, leopards, pandas, cheetahs, polar bears, gorillas and gray wolves as “endangered” — even though all but the wolf are classified as vulnerable, endangered or critically endangered. 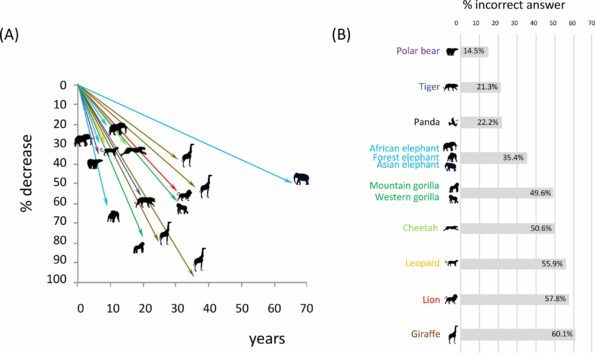 (A) Recent, dramatic declines of the most charismatic animals. Time, but not date, is taken into account, explaining why all trajectories have the same origin. Long, steep lines indicate a large decline at a high rate. Icons represent populations. Wolf is not represented and 4 subspecies of giraffes are represented. The declines are tigers: over 55% in the last 20 years; African lions: 54% over the last three decades; African elephants: over 20% over less than 10 years; savannah elephants: over 30% between 2007 and 2014; Central African forest elephants: 62% between 2002–2011; Asian elephant: over 50% in 65 years; giraffes: 38% in the last 30 years; Masai giraffes (Giraffa camelopardalis tippelskirchi): 52% in 35 years; reticulated giraffes (G. c. reticulata): 80% in 25 years; Nubian giraffes (G. c. camelopardalis): 97% in 35 years; leopards: over 30% in 8 years; cheetahs: over 30% in the last 15 years; southern Beaufort Sea polar bears: 63% between 2004 and 2010; Grauer’s gorillas: 77% in less than 20 years; Western lowland gorillas: nearly 60% in 30 years. (B) Percentage of incorrect answers to the question, “Is this species endangered,” reflecting biased knowledge of conservation status of the most charismatic species. © 2018 Courchamp et al. This is an open access article distributed under the terms of the Creative Commons Attribution License. Click image to expand

Chapron and his colleagues hypothesize that the sheer abundance of animals on screens and billboards causes them to seem much more abundant than they actually are — and this, in turn, makes people complacent about supporting wildlife protection. The team argues that companies whose brands rely on such animals should financially support conservation to compensate for this “lost” conservation funding.

Other scientists have similarly argued that other entities, too, should give back to endangered animals, from sports teams that have animal mascots to fashion brands that sell clothes with leopard spots and filmmakers that use animal footage. A number of companies have in fact partnered with nonprofits or made one-off donations to support the species they use. The oil and gas giant ExxonMobil’s Save The Tiger Fund — inspired by the “put a tiger in your tank” commercials — was a major contributor to tiger conservation worldwide from 1995 to 2009. Coca-Cola, which used to use polar bears in commercials; the South African liquor company Amarula, whose bottles sport an elephant; and other companies have had similar initiatives.

Conservation biologist Alexander Braczkowski of Southern University of Science and Technology in China notes that many initiatives of this kind are short-lived and modest in their contributions and scale. By contrast, the Lion’s Share Fund strives to build lasting partnerships with companies, explains Patricia Holly Purcell, senior advisor on nature, climate and energy at UNDP. Participating companies are encouraged, over time, to donate 0.5% of their media budget toward conservation-related projects for ads featuring animals. In a 2021 paper, Braczkowski and his colleague stressed the importance of funding continuity to the success of species conservation programs. 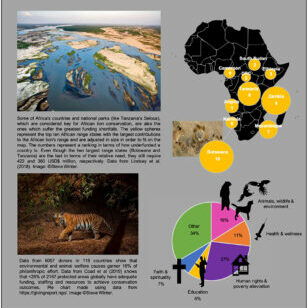 So far the fund has raised more than US$6 million, supporting more than a dozen conservation projects in 15 countries, predominantly in South America, Asia and Africa. The funds aren’t earmarked for specific species; instead they are allocated to projects chosen by conservation experts from a pool of grant applicants, Purcell explains. Braczkowski praises this model, which allows the fund to dish out money to a mix of nonprofits, including small- and medium-sized ones. The backing of a formal body like the UN is also a plus, he adds. “I think that is definitely a good step in the right direction.”

The fund’s flagship program is a US$2 million project supporting several efforts to preserve the 2.6-million-hectare (6.4-million-acre) Leuser rainforest ecosystem in Sumatra, a vital habitat for elephants, rhinos, tigers and orangutans, says Erica Fleet, a program and project support manager at the UNDP. Money also went toward wildlife recovery efforts following Australia’s devastating wildfires in 2019 and 2020, and a project in Mongolia aiming to help local people protect endangered snow leopards.

Funding to date is far short of the initial US$100-million annual goal and of what’s likely needed: One study estimated safeguarding Africa’s lion populations would require more than US$1 billion every year.

Chapron says he isn’t surprised by the relatively modest number of companies that have joined so far. Corporations will only commit to long-term conservation projects, he says, if doing so generates significantly more profit for them. And he says he suspects that supporting species conservation won’t be lucrative to many companies; as his research suggests, consumers aren’t very knowledgeable about biodiversity loss. “I don’t think customers are going to go to buy more from Exxon than BP or Shell because [they contributed to the conservation of] tigers,” he says.

Of seven companies Ensia contacted to ask if they’d consider financially contributing to long-term conservation efforts of the animals they use in marketing, four (Epson Europe, which sells ink cartridges carrying cheetah images; Evernote, which has an elephant logo; Frito-Lay, which uses Chester Cheetah to sell Cheetos snacks; and Peugeot, which bears a lion logo) didn’t respond or provided no comment by deadline. The Wonderful Company, which owns Wonderful Pistachios, whose commercials have sometimes featured an animated elephant named Ernie voiced by actor and pro wrestling star John Cena, pointed to a US$100,000 donation once made to a conservation organization. Spokespersons for Nestlé (Lion Cereals brand) and Kellogg’s (Tony the Tiger) emphasized the brands’ general commitments to habitat protection.

However, Chapron and Braczkowski expect that little will change without mandates that require companies to pay to use images of specific animals in advertising. And as of now, there’s little legal basis to make such a royalty mandatory, as animals currently have no legal personhood. But if some kind of formal mandate on wildlife imagery royalties existed, it could be a boon to conservation. In their paper from last year, Braczkowski and his colleagues calculated that if the 14 companies on the Forbes 2000 list using big cats paid just 0.1–1% of their profits, between US$200 million and US$2 billion a year could be raised for conservation. Braczkowski points to the United States’ 1937 Pittman-Robertson Wildlife Restoration Act, which places a 10–11% tax on sporting arms and ammunition and generates more than US$500 million per year to manage and restore wildlife populations. While not directly analogous, “it shows the power of how one single U.S. law can do absolute wonders for wildlife conservation,” Braczkowski says.

Even without such laws, though, Purcell says that biodiversity loss is starting to attract the same level of visibility and interest from the business community as the climate crisis. The Lion’s Share Fund may be more of a carrot than a regulatory stick, but it will take both to turn the tide on biodiversity loss, Purcell says: “I see us as part of that bigger ecosystem in trying to drive that trend in the right direction.”