Helped by the Covid-19 health crisis, e-commerce is facing a banner year. According to the 2022 edition of the e-Conomy SEA report released by Google, Temasek and Bain and Co last month, e-commerce in Southeast Asia is projected to end the year as a US$131 billion business, following a 204-per cent growth spurt from US$43 billion in 2019. The report further forecasts that online shopping will continue to expand by 17 per cent annually over the next three years, to be valued at US$211 billion by 2025.

Partly as a result of the e-commerce boom, the digital economy in the region is expected to double its greenhouse gas emissions by 2025, figures from the report show. These include direct emissions classified as Scope 1 (emissions from directly owned assets) and Scope 2 (electricity emissions), as well as pollutants from indirect sources that impact their value chain, classified as Scope 3.

The report further flags responsible use of materials for products, packaging and food as another area of environmental concern for the digital economy of Southeast Asia, where six of 11 countries produce a combined 31 million tonnes of plastic waste a year.

But it noted that while awareness of environmental issues “remains nascent” in the digital economy, it is on the rise.

ESG reports released by the region’s top three online retailers (Lazada, Tokopedia and Shopee) or their parent companies show that they are starting to address the impact their operations have on the planet, placing emphasis on reducing packaging waste and emissions.

Carbon disclosure remains patchy, with no industry standard on what to reveal. GoTo, the parent company of top Indonesian online retailer Tokopedia which also operates the ride-hailing service GoJek, said it produced 828,898 T co2e in 2021, with 88 per cent accounted for by products and services acquired from its digital platforms.

Shopee’s parent company, SEA Ltd, said it emitted 112,014 T co2e last year, of which three-quarters was accounted for by electric use. The remainder came from company-owned vehicles, refrigerants and heating. It did not include Scope 3 emissions in the report.

On its part, Lazada, in its inaugural ESG report released last October, did not disclose how much carbon emissions it generates, but said that about 60 per cent fell under Scope 3. Another 38 per cent are direct emissions covering fuel consumption by company resources while the rest are accounted for by electricity use.

“Given the nature of our industry, land transport from our logistics and delivery operations contributes significantly to our GHG emissions,” Lazada acknowledged. 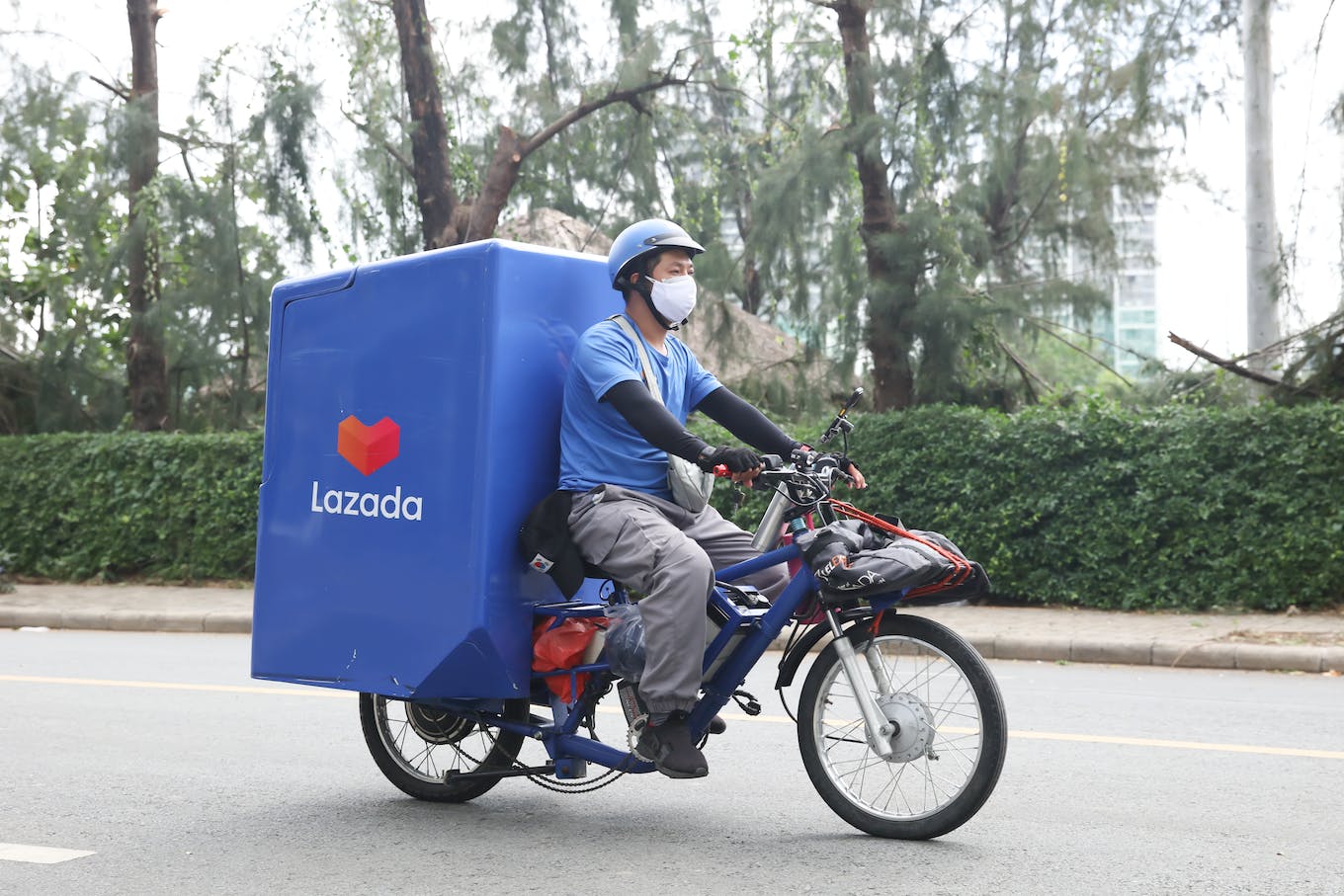 To reduce the carbon footprint of parcel delivery, some of Lazada’s drivers travel by electric vehicles. Image: Lazada

Lazada also has a delivery fleet of electric scooters that can deliver more than 100 parcels per charge and travel up to 20km in Vietnam. In Singapore, its online grocery platform RedMart uses a routing algorithm to make deliveries more efficient. For the delivery of temperature-sensitive goods, the retailer also replaced refrigerated machines powered by truck engines with insulated totes.

Meanwhile, GoTo targets a full conversion of its driver fleet to electric vehicles by 2030.

To mitigate Scope 2 emissions, Tokopedia installed a 13.4kWp solar system on the rooftop of its offices. Shopee owner SEA has retrofitted lighting structures in its Singapore offices, a move that it says will halve energy use, reduce manpower and maintenance costs, as well as cut its monthly carbon footprint by 13.4 tonnes. The company plans to roll out the initiative in regional offices and facilities to make it a group-wide project. 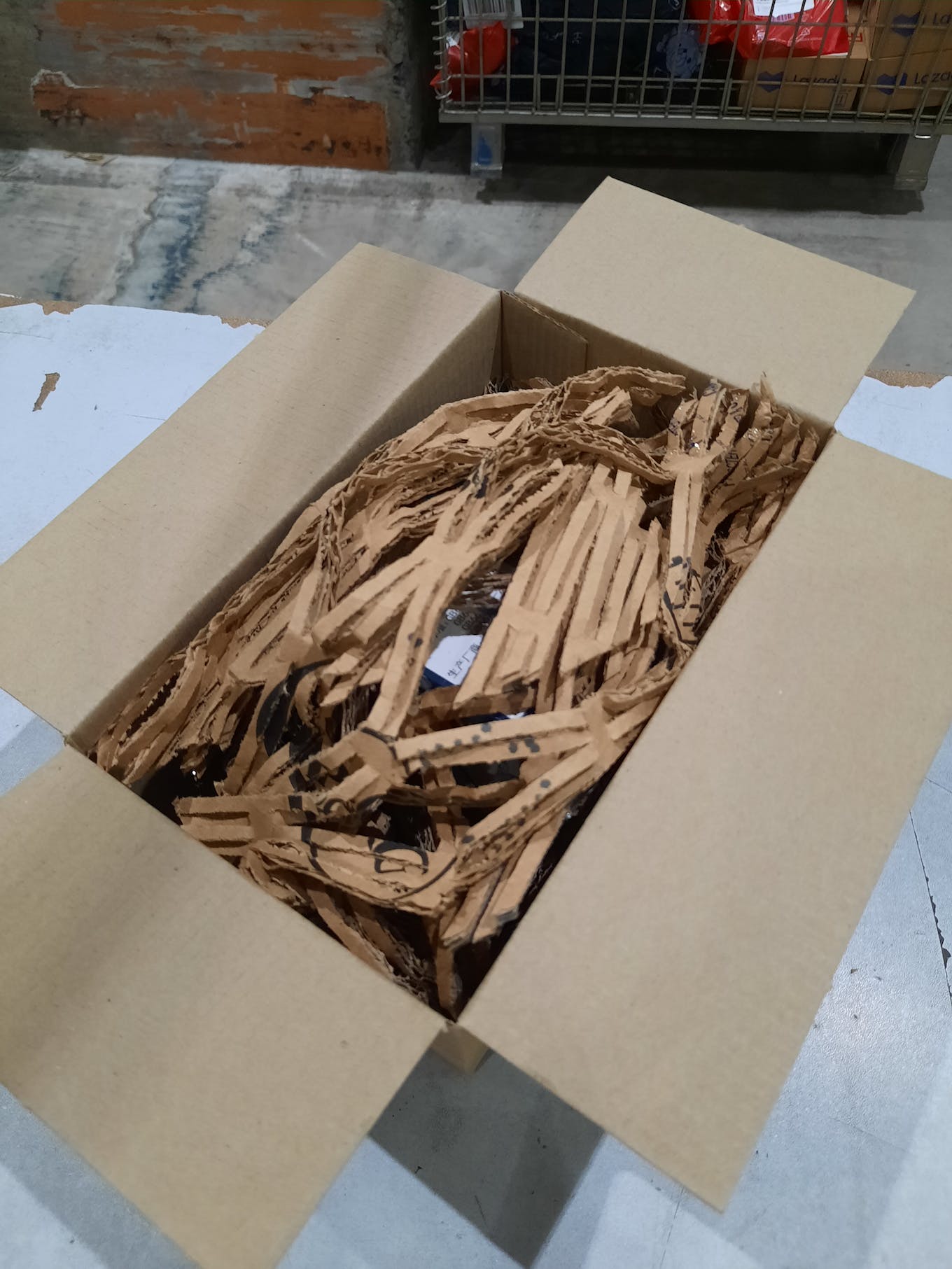 Curbing plastic waste is another common initiative, with companies launching programmes that promote paper packaging as an alternative to plastic wrapping. For example, Lazada has a Fulfilled by Lazada logistics service which provides customers with two alternative packaging options: Eco, which reduces the use of plastic in parcels, and Zero, which uses paper tape to seal paper parcels.

Tokopedia started using cardboard cushioning in lieu of plastic pillows and bubble wrap last year. It also avoided dumping more than 10 metric tonnes of cardboard packaging on landfills by shredding and repurposing them, while another 113 metric tons was recycled into pulp, its parent company states.

Industry reports note that the current environmental measures of online retailers in the region have room to mature and expand. Schemes on reducing packaging waste centre on what McKinsey and Company classifies in a paper on sustainable packaging as low-hanging fruits, “where barriers to switch are low, and most of the work can be done … without broader value chain coordination”.

“Online shopping platforms like Lazada and Shopee should do more by redesigning their systems, processes and materials used,” Greenpeace Southeast Asia Zero Waste Campaigner Marian Frances T. Ledesma told Eco-Business. “They should also utilise reusable packaging for deliveries and invest in reverse logistics for these.”

She pointed out that replacing plastic with paper and bio-based plastic is also “problematic” because these are still thrown away. Using paper adversely impacts on the forest and climate, while bio-based plastics compete with food production and require significant amounts of water, land use and energy to make, she added.

McKinsey observes that the world’s biggest manufacturers and retailers are already looking beyond the “quick wins”, and are experimenting with using returnable and reusable metal and glass.

Lazada, on its part, noted that a “collective effort” across the supply chain is critical to make a significant difference.  Mr Frank Luo, chief financial officer of Lazada Group, told Eco-Business: “We need an integrated approach across multiple fronts, such as to deepen collaborations with suppliers to improve packaging designs, nudge the ecosystem towards green packaging adoption, educate customers about recycling options and lastly, support relevant projects that governments have put in place.”

Similarly, online retailers are urged to include Scope 3 solutions in decarbonisation efforts given that these have the biggest environmental impact. In a study that looks into global retailers’ response to carbon emissions, the Boston Consulting Group notes that Scope 3 emissions typically account for over 90 per cent of the industry’s environmental impact.

“Focusing solely on Scope 1 emissions overlooks a company’s supply chain, transportation and distribution which are usually the most carbon intensive. Scope 3 emissions have to be included in emission reduction targets or plans,” Ledesma said.

Noting that the reduction of Scope 3 emissions is a challenge because it is influenced by market readiness, Lazada said it aims to “develop an overarching ecosystem approach and create a ripple effect that extends through our networks and create wider change” in collaboration with its value chain partners.

Meanwhile, e-commerce companies also play a role in promoting environment-friendly habits among its buyers, a significant portion of whom are willing to shell out more for sustainable products and services, studies state.

According to the e-Conomy SEA report, 32 to 55 per cent of digital users in the markets covered by the three biggest online retailers in the region – Singapore, Malaysia, Thailand, the Philippines, Indonesia and Vietnam – are willing to pay more for sustainable products or services, although it also noted a 30-per cent gap between their intent and their actions on sustainability.

The companies already hold campaigns to promote environmental awareness, but these are currently time-bound and/or limited in scope.

Tokopedia, for instance, allows its users to donate funds for tree planting, while Lazada ran LazEarth, a two-day campaign which promoted eco-friendly products and sellers so buyers can easily spot them on the platform.

Lazada declined to discuss future initiatives to this end, but acknowledges that it is in a position to collaborate with brands “to offer alternative product options to meet the changing demands of more eco-conscious Southeast Asian consumers”.

Ledesma, on her part, recommends that online retailers review policies to get more buyer engagement. “[Their policies should] encourage consumers to choose zero waste transactions – [like] incentives and higher seller ratings [for sellers] using less or no packaging on non-fragile items”.

Mr Luo said that Lazada is “committed to reducing our carbon footprint across our value chain”. He adds:  “We also recognise that Scope 3 emissions are the hardest to reduce as they are heavily influenced by the readiness of our markets. As a platform, we recognise that we are in a unique position to make a difference. Through deeper collaborations with our value chain partners, we aim to develop an overarching ecosystem approach and create a ripple effect that extends through our networks and create wider change in times to come.”