UK environmental activists sounding the alarm in the ’90s

In the middle of the 1990s, a wave of protest emerged in response to the UK government’s massive road building plans. From 1992 to 1999, thousands of protesters staged occupations in the streets of London while others lived high up in trees due to be cut down to make way for motorways and bypasses.

Adrian Fisk, who grew up in the wilds of Dartmoor in south-west England, was still at college studying for a photography degree at the time. “I heard about these people living in trees. So at the beginning of ’95 I went down and checked it out.”

Motivated by a love of the natural world and desire to challenge the political status quo, he headed to Newbury – a location that would later become symbolic of the campaign – and embedded himself with the protesters.

“I built a treehouse and lived sixty feet up in an oak,” explains Fisk. “I was very supportive of what they were doing. I was an activist myself. My power, which I quickly came to realise, was in my camera.”

This year, Fisk published the photographs he took during those years in a new book, Until the Last Oak Falls. It tells a moving and personal story of people who endured bitter winters, dizzying heights and ridicule in the media to defend the natural world. It’s one of dedication, disobedience, grief and hope in the face of environmental destruction.

For one, he says, the climate and ecological crisis has only deepened in the intervening years. Half of all the CO2 emitted by humans since the industrial revolution began has been released in the last 25 years, he points out.

“All those guys were shouting from the treetops, ‘This is absolutely nuts, what are you doing? We’re on a very dangerous trajectory and we have got to stop,’ but no one listened to them.”

With the recent resurgence of climate activism and direct action in the UK, we have a chance to reflect and learn from history, Fisk says. “Now we have XR [Extinction Rebellion], Fridays for Future and Greta Thunberg. The activists were bang on the money 25 years ago. We didn’t listen then, so listen to them now.” 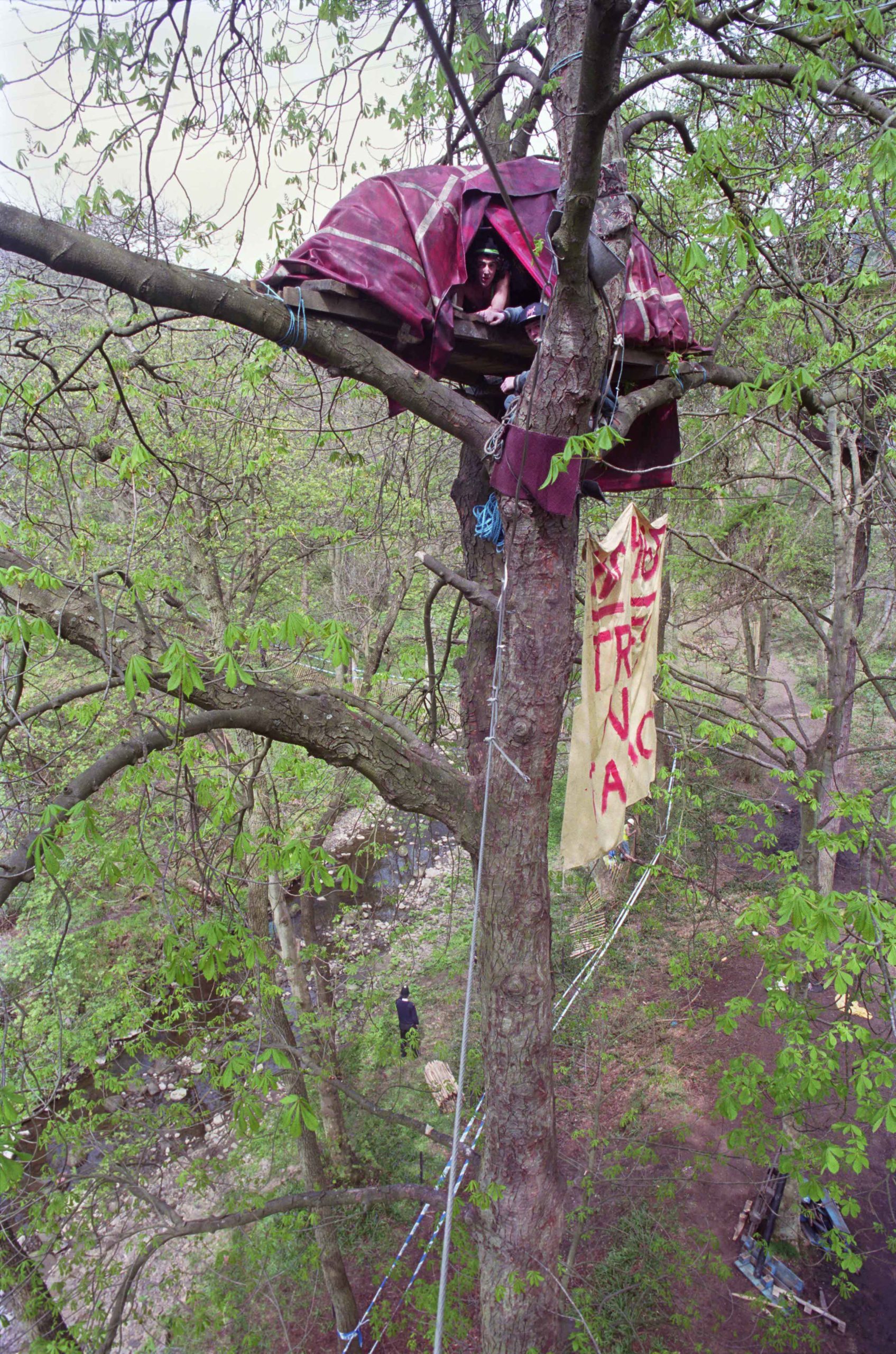 Stanworth Valley, north-west England, 1995. To stop the felling of trees for the expansion of the M65 motorway, protesters occupied the land due to be cleared – a tactic known as tree sitting. A police officer can be seen far below. (Image: Adrian Fisk) 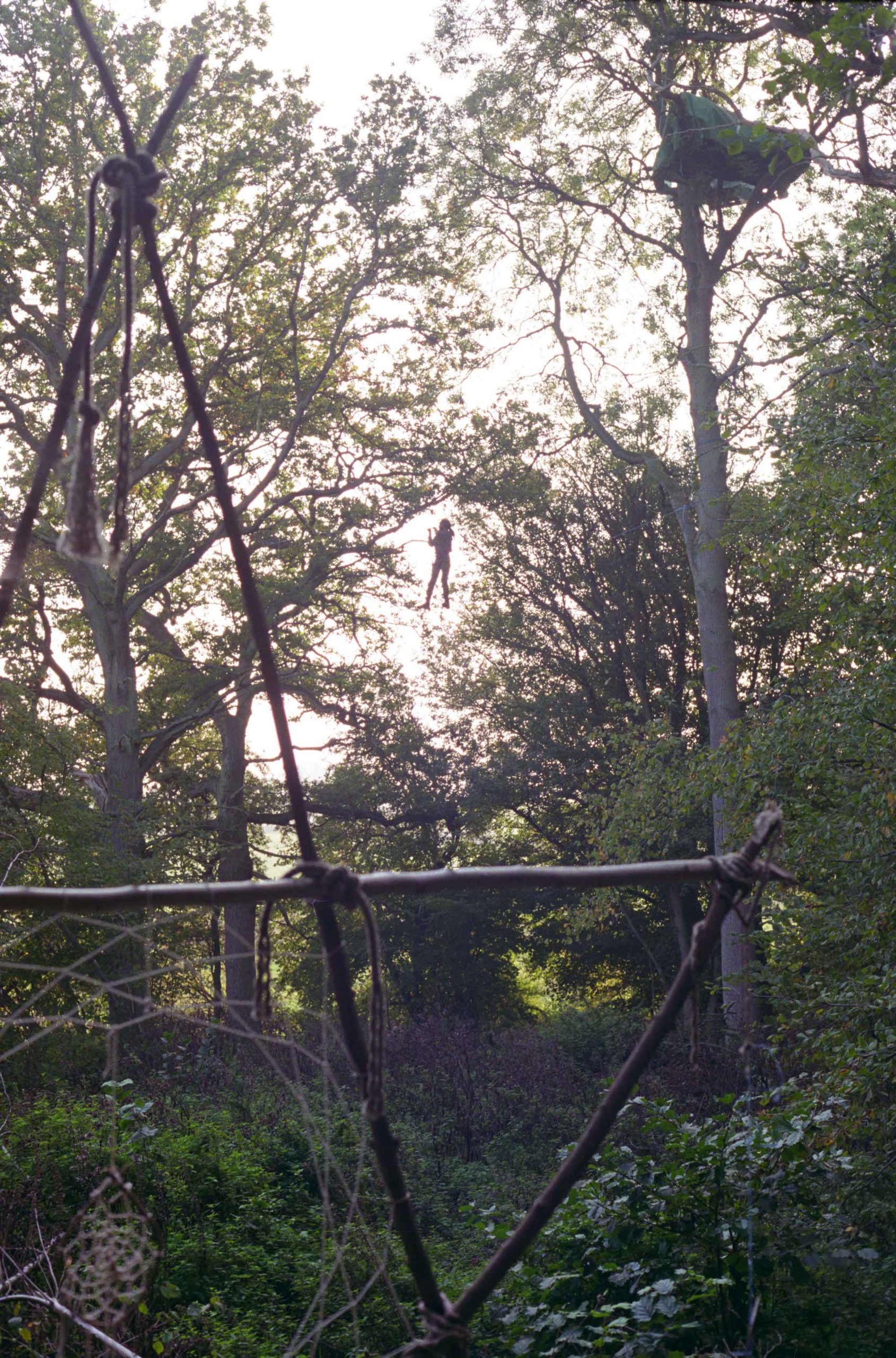 A young man seems to hover in the woodland canopy as he walks across ropes suspended between trees at the proposed site of the Newbury bypass, west of London (Image: Adrian Fisk) 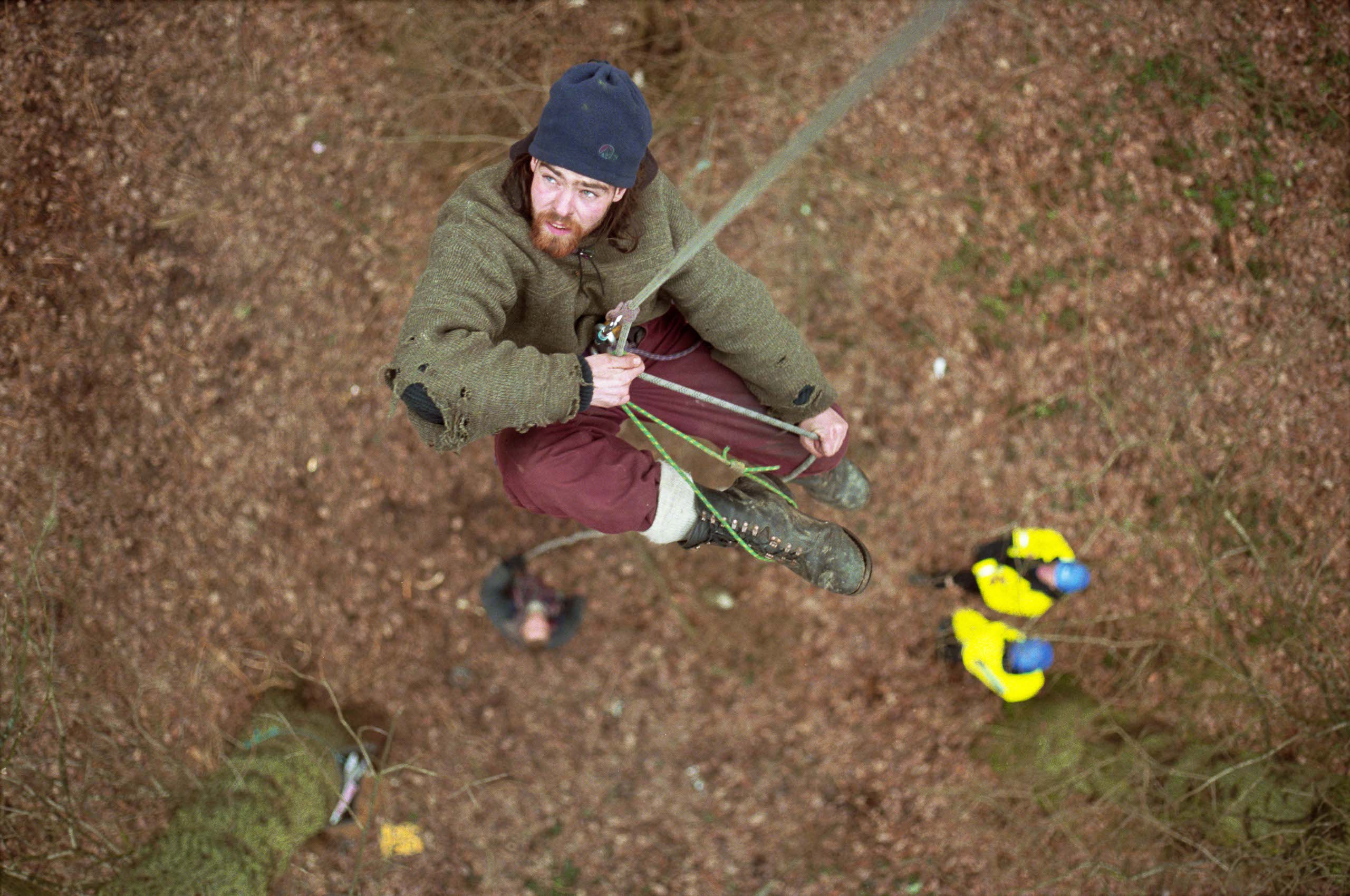 Just getting into a treehouse is a difficult task. It takes around 15 minutes, using a laborious climbing technique called prusiking. (Image: Adrian Fisk) 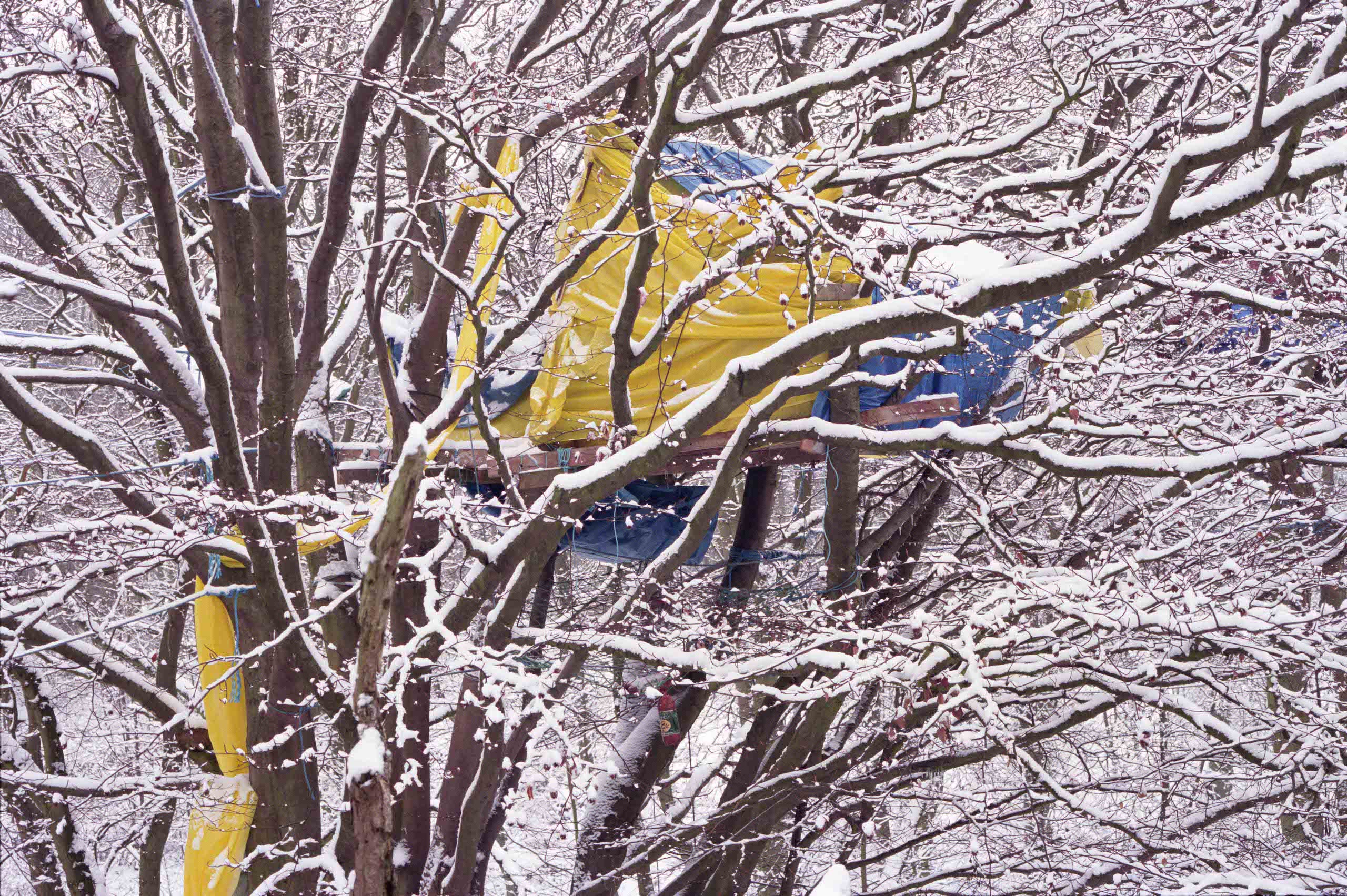 Temperatures plunged to -13C at Newbury during the winter of 1995, rendering simple tasks a challenge. “I’d never really understood the importance of that first kiss of spring until I’d spent much of that winter living outside,” writes Fisk. (Image: Adrian Fisk) 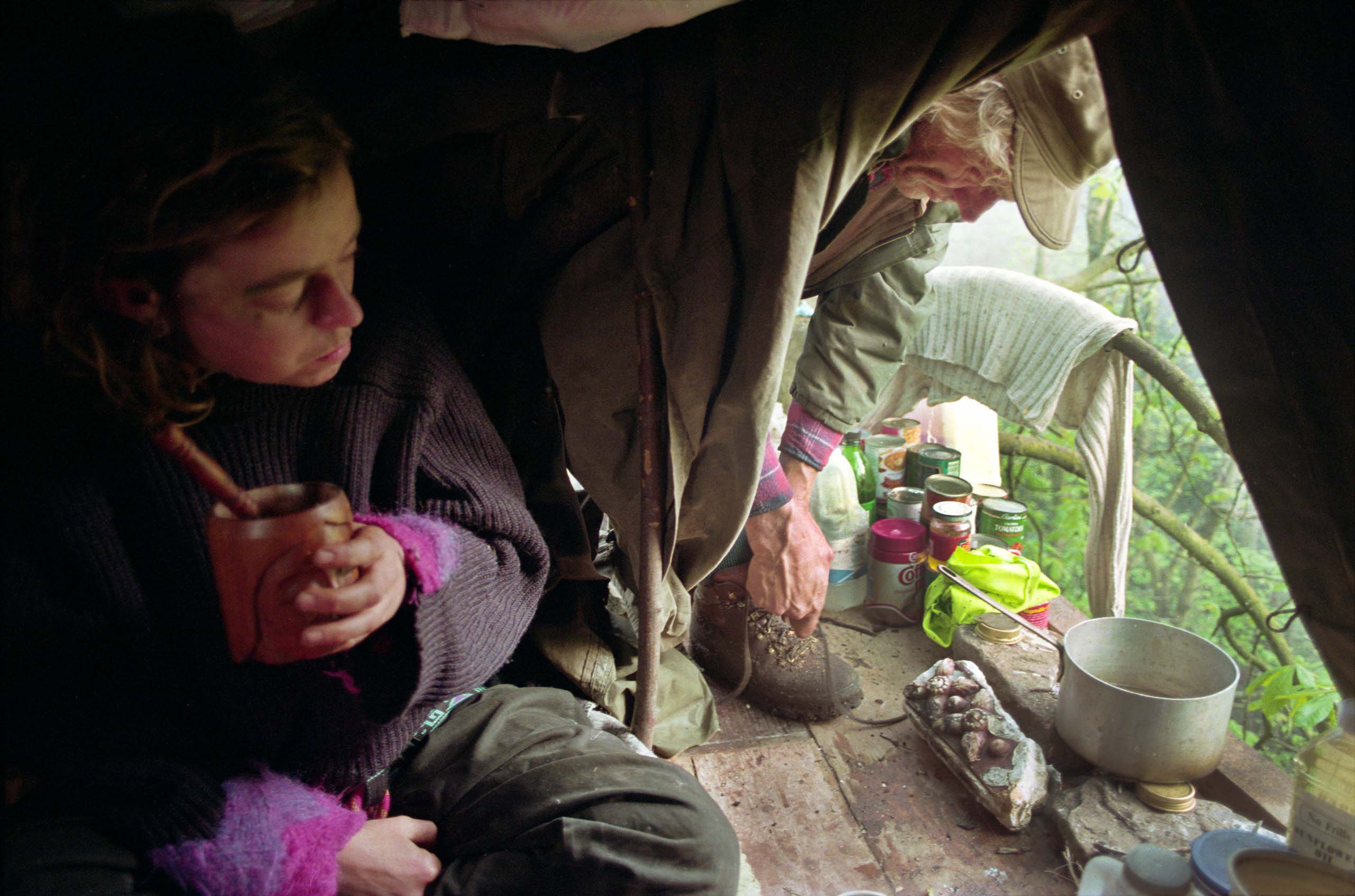 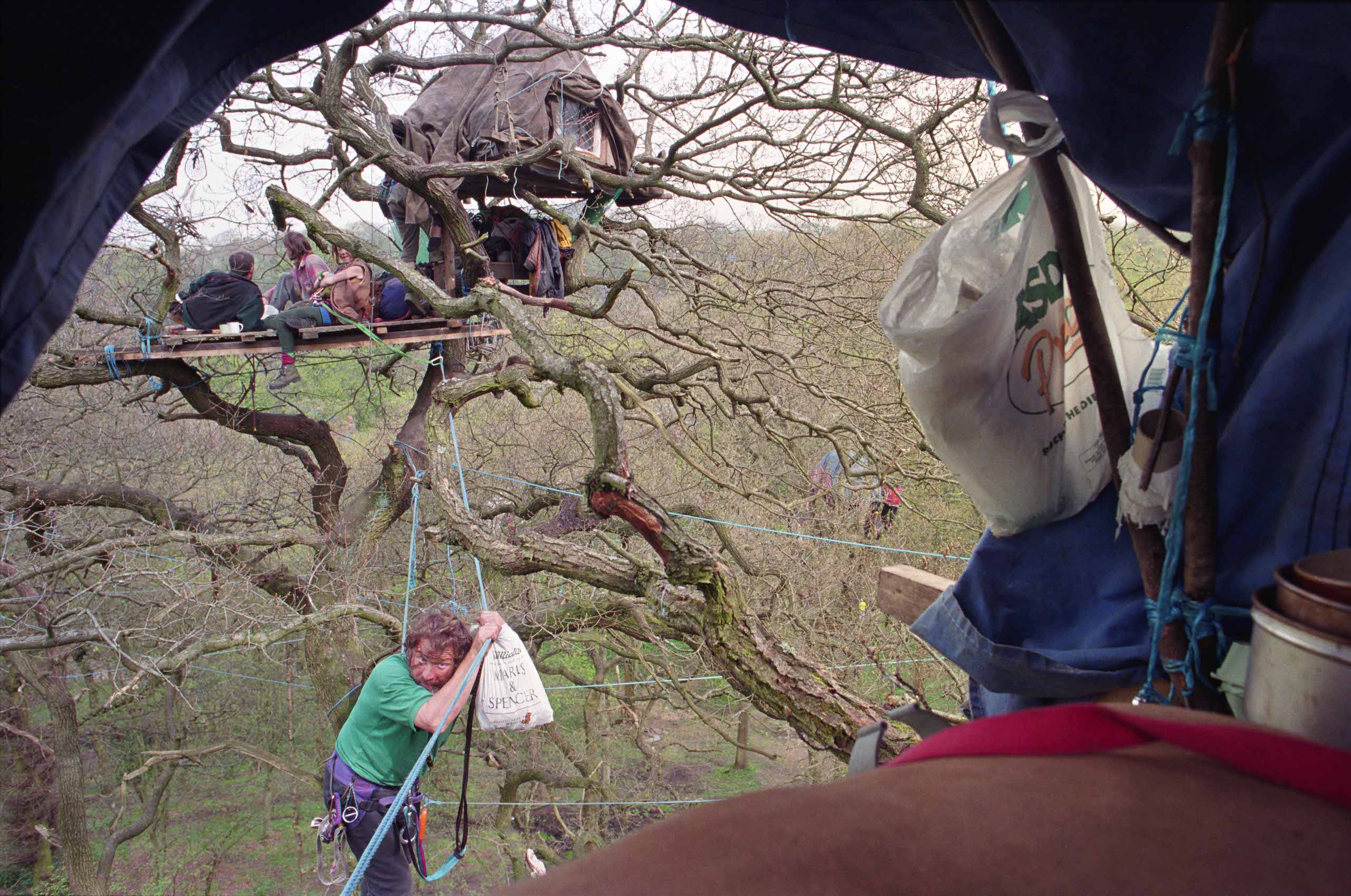 Moving around tree occupations could be dangerous – a testament to the lengths these individuals were willing to go to save ancient trees (Image: Adrian Fisk)

The decade saw anti-road protests take various forms. As well as occupying trees to prevent the bulldozers and chainsaws from destroying mature oak, ash and beech trees, people swarmed major roads in London as part of the Reclaim the Streets campaign. Rallying against the growing dominance of car culture, they blocked off roads using bamboo tripods or staged car crashes, then held huge street parties.

These protests were hugely popular because they were the “nexus of rave scene and the environmental movement”, explains Fisk.

“People made the connection that the number of cars on the road determined the amount of CO2 that was going into the atmosphere. And that more cars meant more roads, which meant cutting through pristine natural environments.” 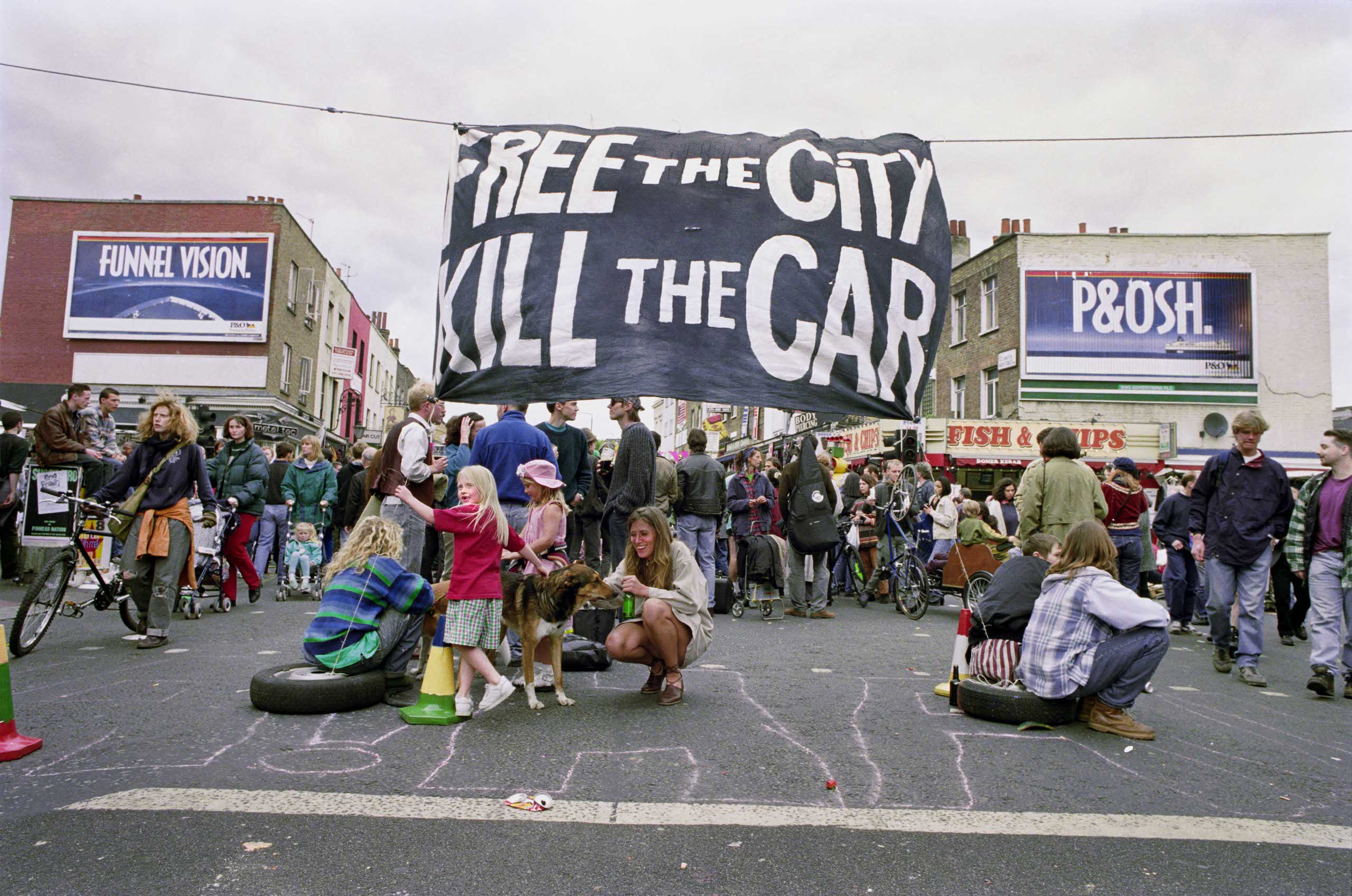 A Reclaim the Streets protest in Camden, north London, May 1995. “A couple of hours earlier it had been a road rammed with cars choking those who walked it with a toxin all too familiar on London’s streets,” writes Fisk. 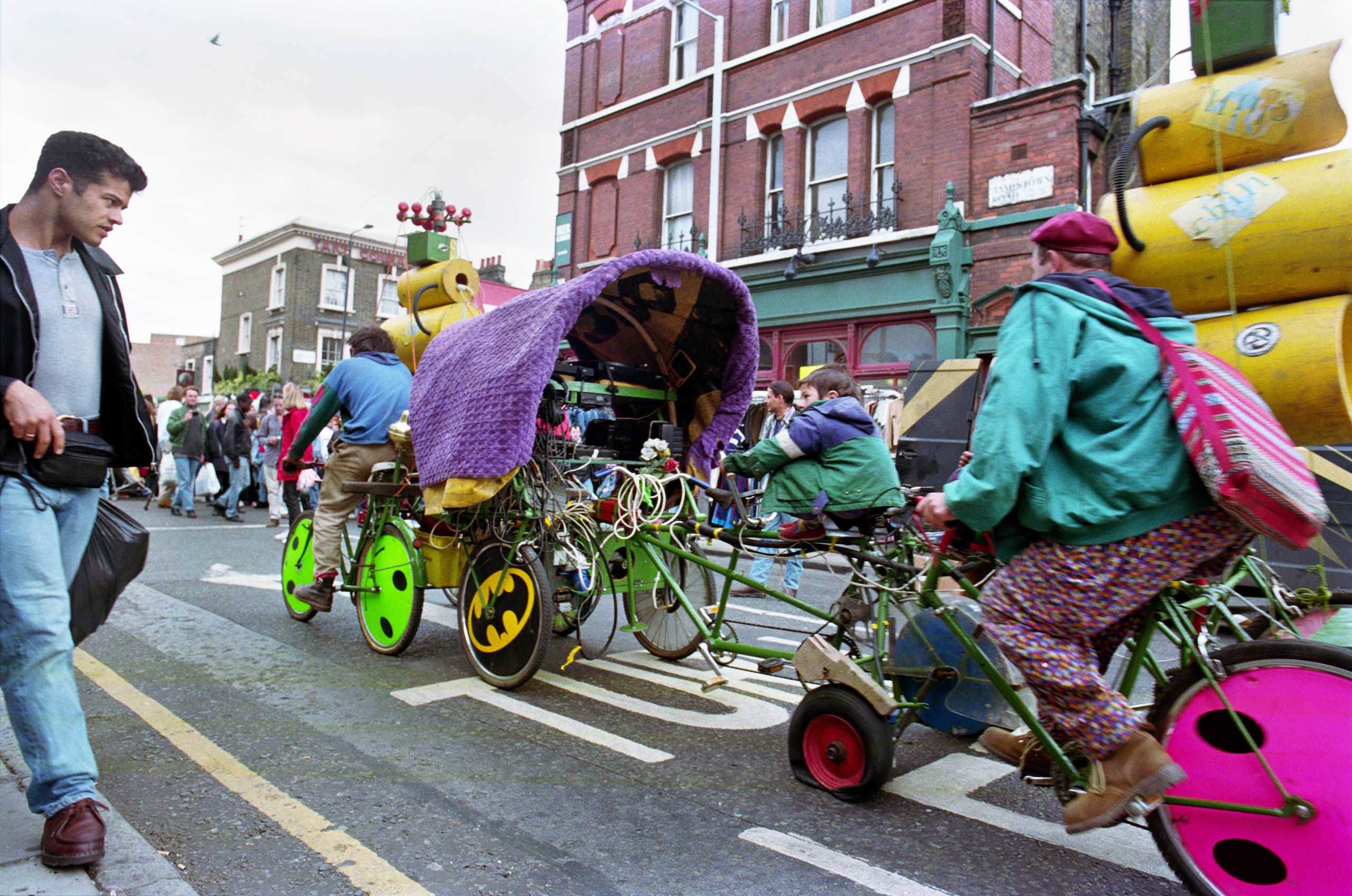 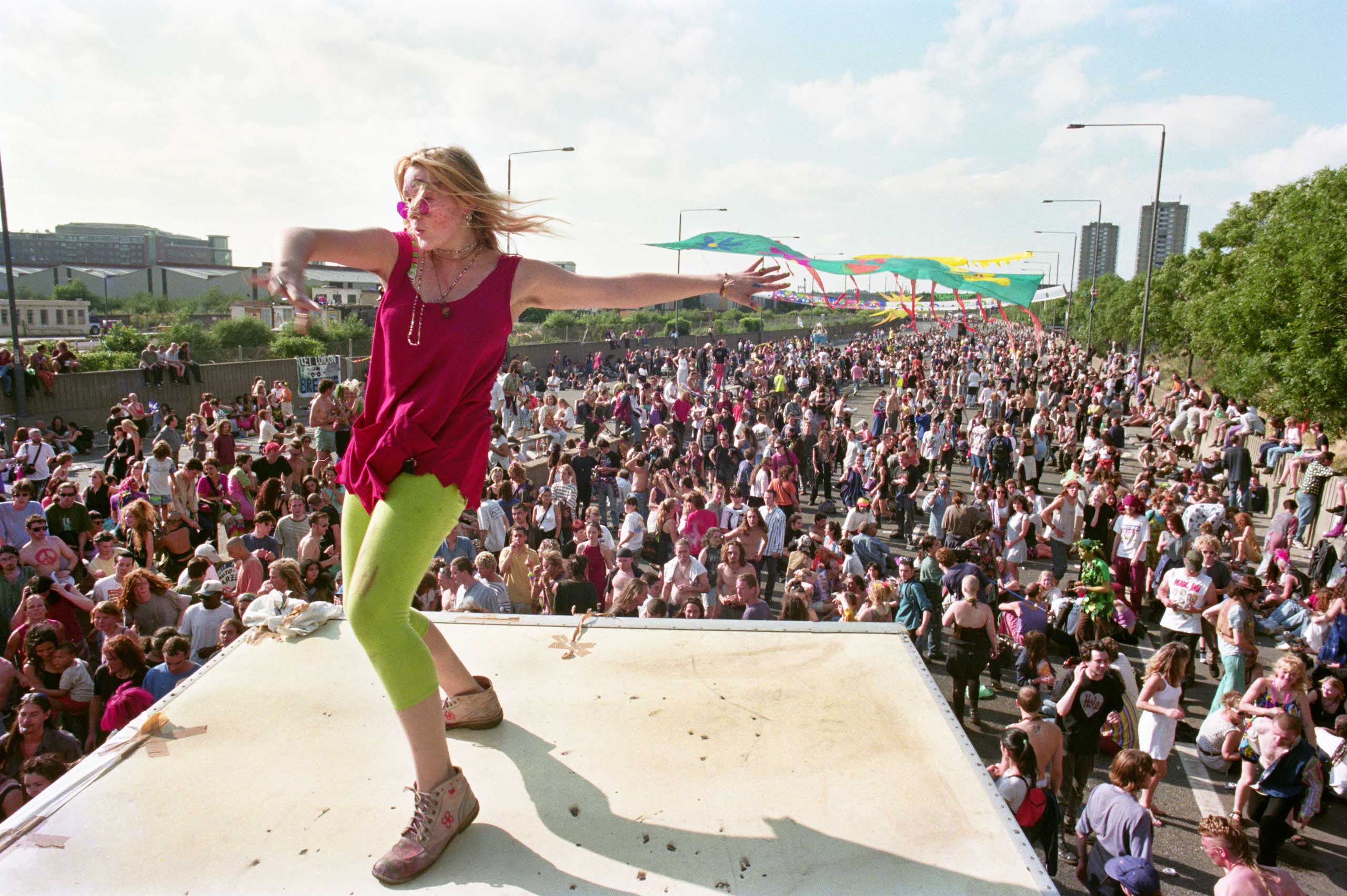 Techno music was an integral part of the anti-road protests. The 1994 Criminal Justice and Public Order Act effectively banned outside raves but in the process politicised a generation of techno-lovers, who were drawn to the street protests in defiance. (Image: Adrian Fisk)

As the worsening impacts of climate change and biodiversity loss cause greater disruption to people’s lives, direct action protests, too, have become more disruptive in a desperate attempt to force governments to take bolder policy action.

The public reaction has been divided, with most of the media coverage missing the point that the women had chosen a painting protected behind glass.

Disruptive protests like these are vital, says Fisk. “Direct action has two roles. One is to physically stop what’s happening. The larger role is to create attention. It’s about shining a light. Otherwise, people are in the dark.”

On a cold March morning, police escort a convoy of diggers and cherry-picker cranes to begin the eviction of those protesting the Newbury bypass (Image: Adrian Fisk) 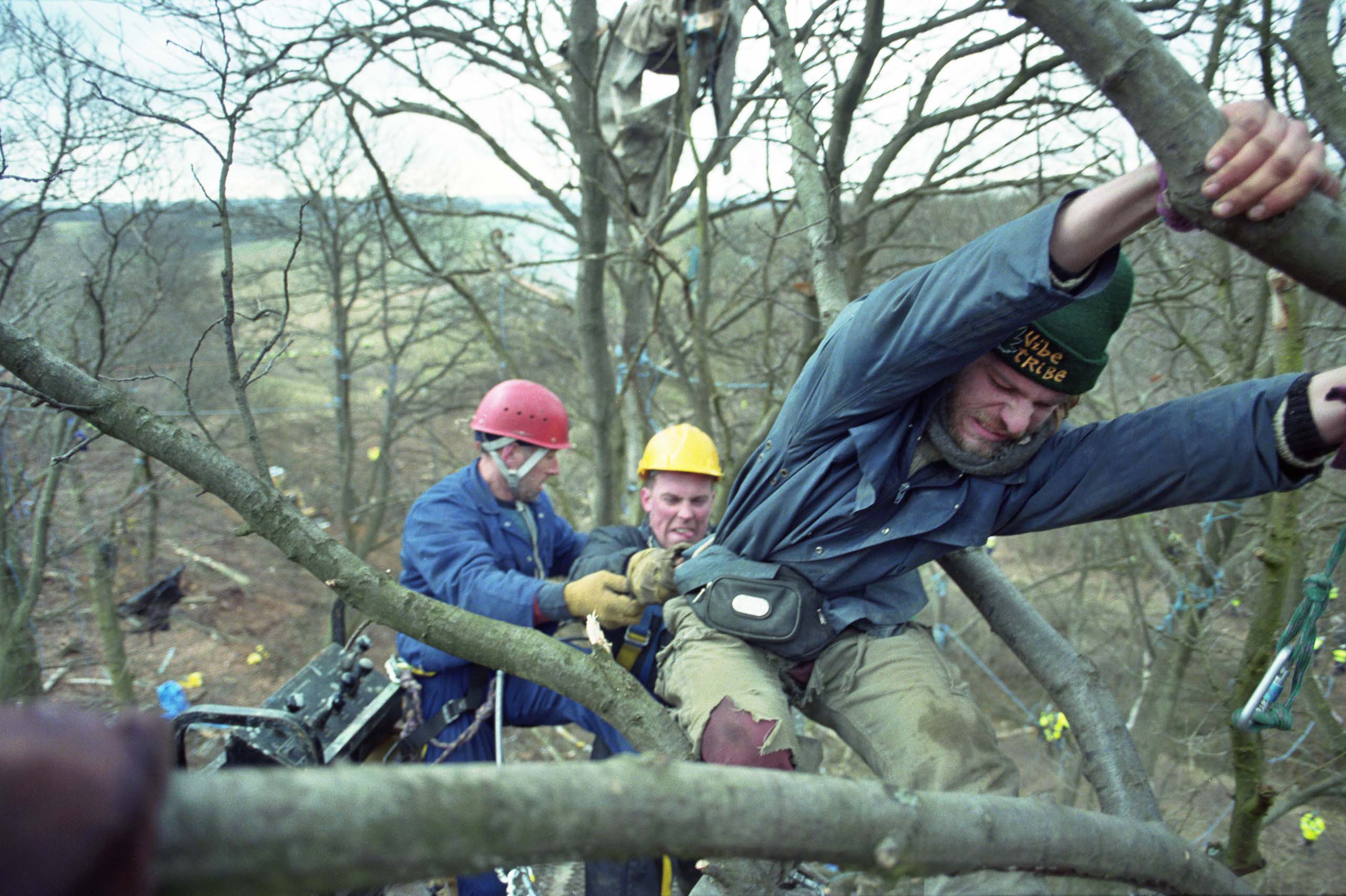 Security guards remove a protester, Kostas, from a beech tree 60 feet above the ground. “Eventually with a yell Kostas was ripped from the old beech, and the tree’s fate was sealed.” (Image: Adrian Fisk) 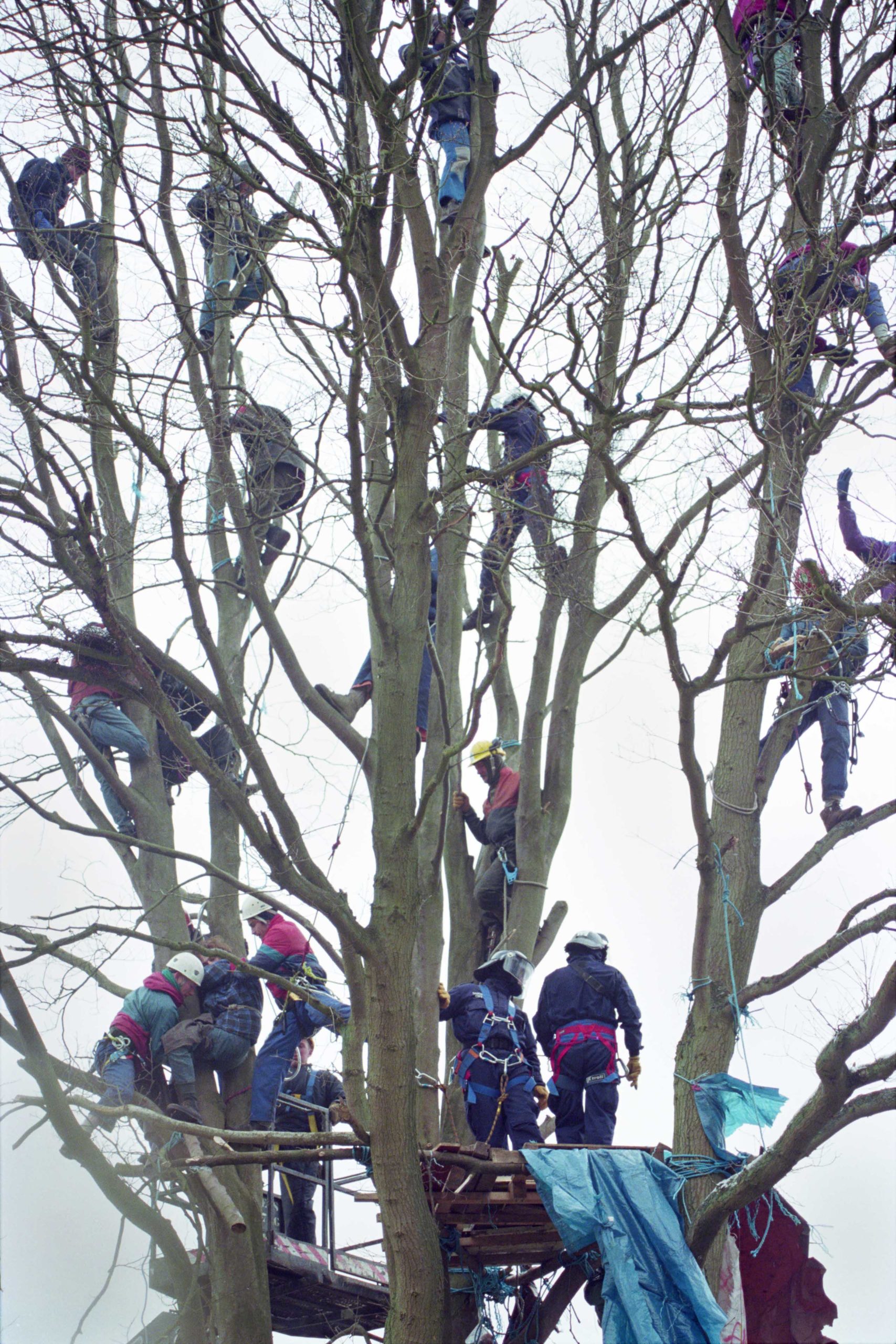 Hoping to occupy the trees for as long as possible, protesters climbed higher and higher to avoid security guards and police who arrived in cherry-picker cranes (Image: Adrian Fisk) 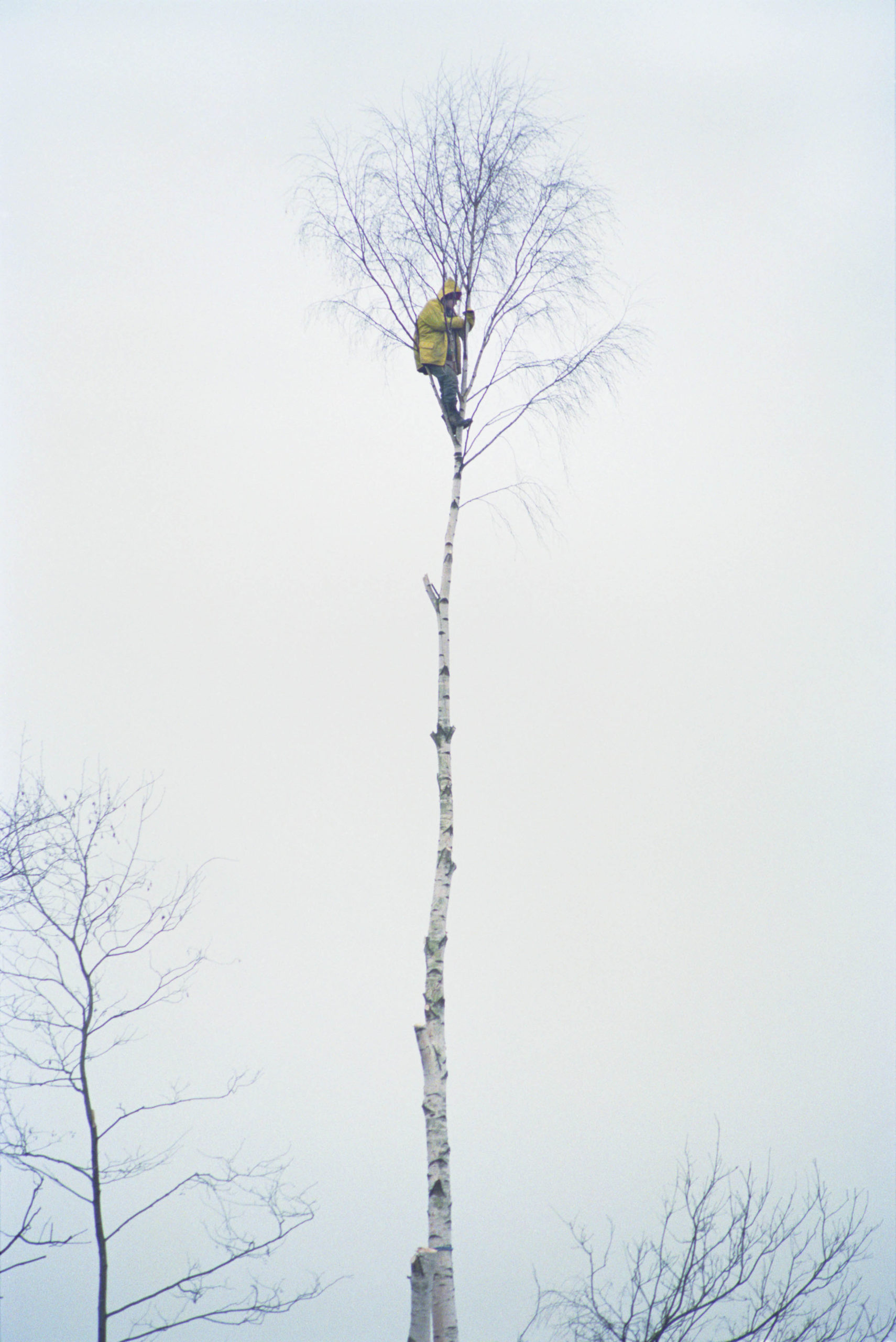 A woman called Cake climbed a silver birch to prevent it from being felled. She remained for nearly three hours in the cold winter winds. (Image: Adrian Fisk) 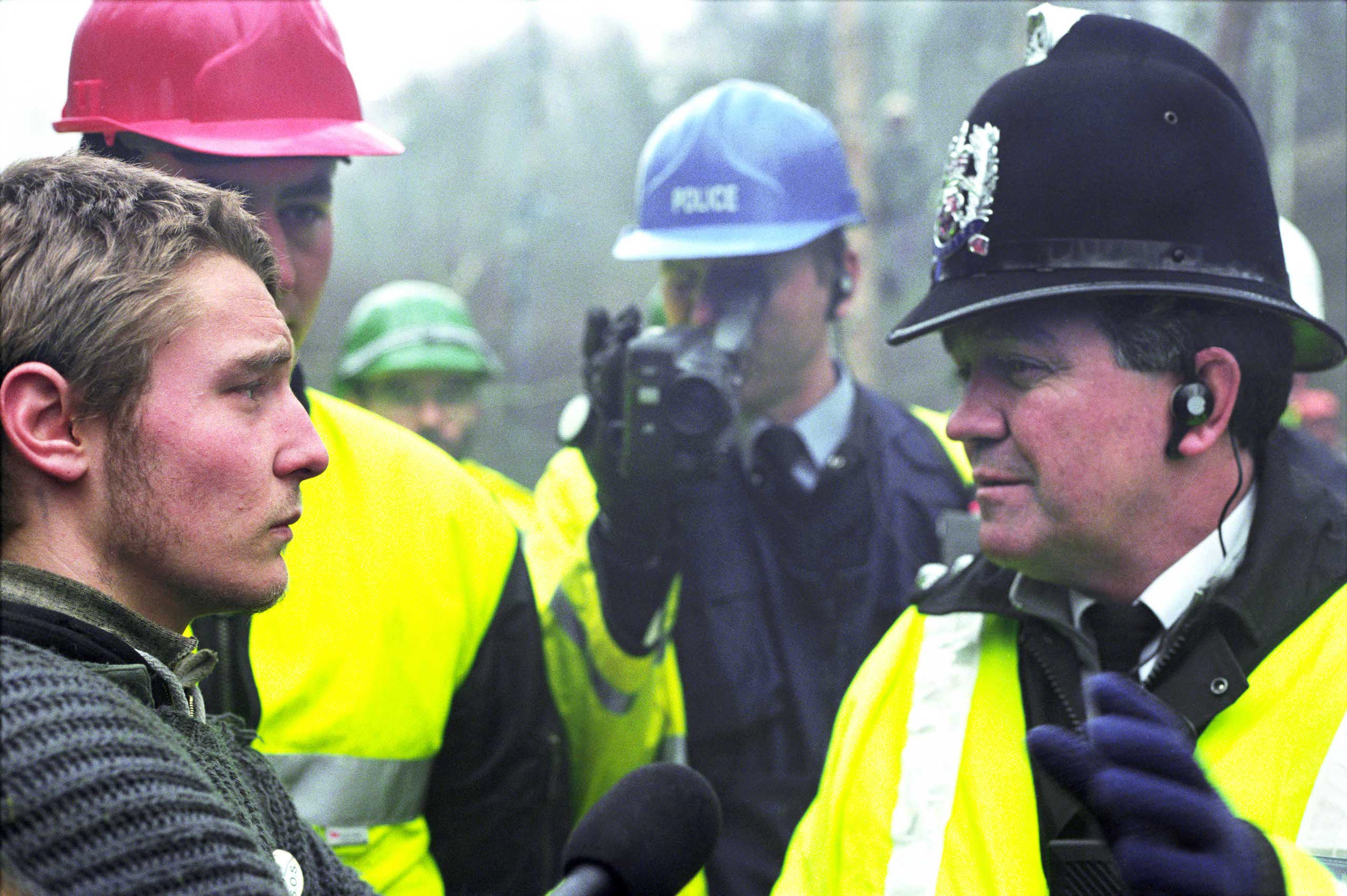 In total, more than 800 arrests were made during the Newbury bypass protests in 1995–96 (Image: Adrian Fisk) 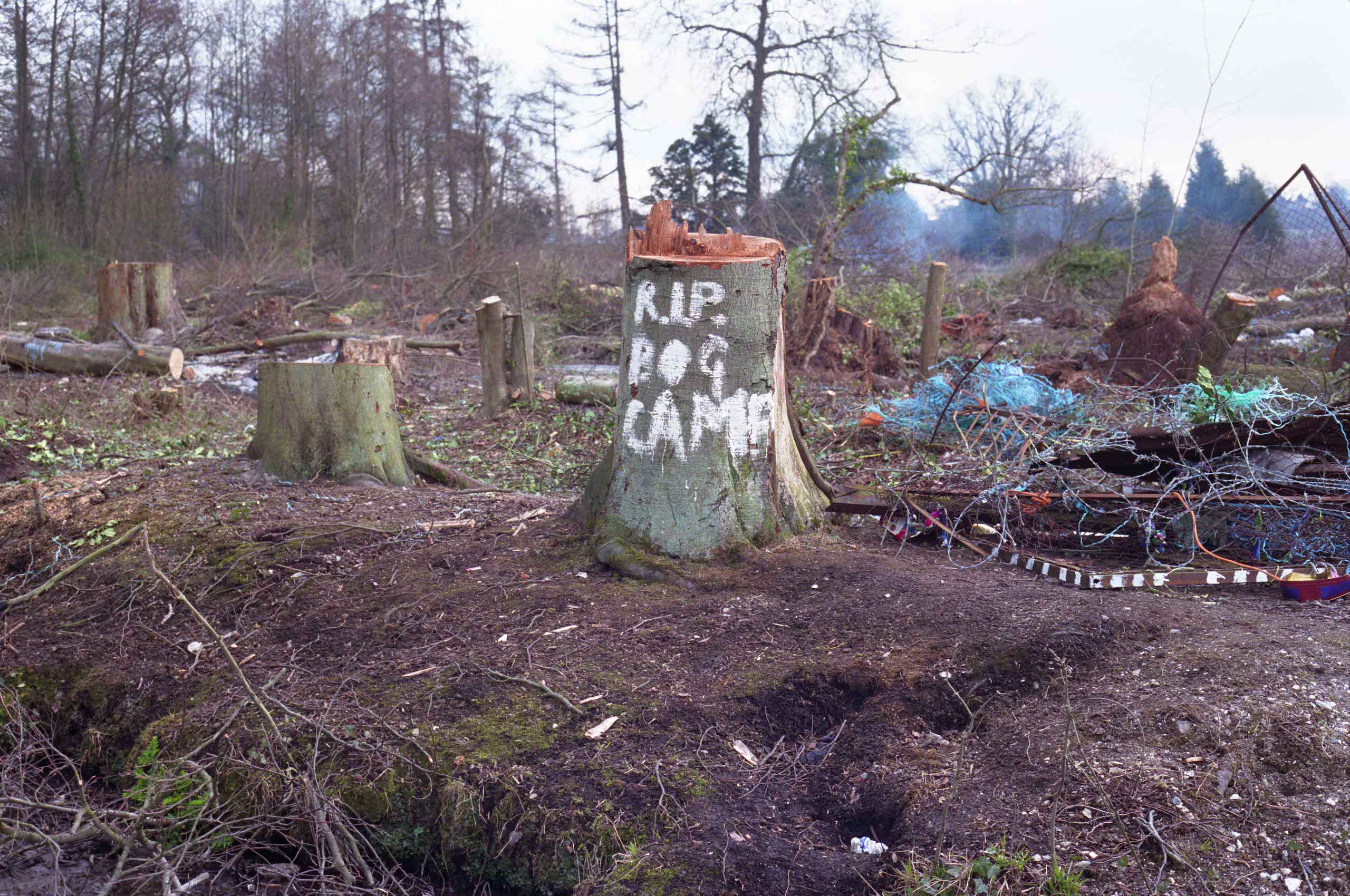 A felled tree stump painted with the words ‘RIP Bog Camp’. Eventually, all the woodland occupations were cleared and the Newbury bypass went ahead. However, the cost of policing the protests would lead the UK government to abandon their plans for a further 77 bypasses. (Image: Adrian Fisk)

Until the Last Oak Falls is published by Alucinari Press and available to purchase from The Booqs.