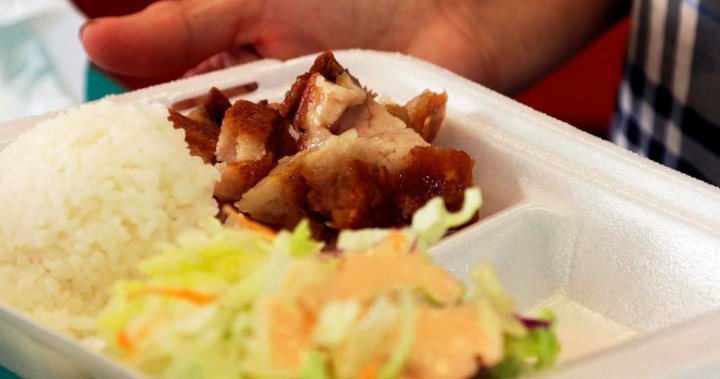 Customers may notice takeout containers, straws and other items being swapped for greener alternatives in the new year as Canada’s food service industry adjusts to the phase-in of a federal law that aims to eventually remove many single-use plastics from the market altogether.

Some restaurants have already gone through months of trial and error in an effort to find the best alternatives to single-use plastic items.

Golden Globes 2023: All the best, most dazzling looks from the red carpet

“We try to stay ahead of the game,” said Paul Bognar, president and chief operating officer of Service Inspired Restaurants, which operates numerous restaurants including Jack Astor’s and Scaddabush.

Though single-use plastics aren’t fully banned yet, he said the company’s restaurants are ready to transition away from plastics early in the new year after months of testing.

After a year-long delay, the first phase of the federal law began on Dec. 20. The initial phase prohibits the manufacturing and import-for-sale of a range of single-use plastics, including: checkout bags like the ones used in grocery stores; cutlery such as forks, knives and chopsticks; takeout containers made partially or fully from plastic, including styrofoam, carbon black and oxo-degradable plastic; stir sticks; and drinking straws, except to accommodate people who need them. Plastic ring carriers will be banned for manufacture and import-for-sale in June 2023.


That means single-use plastics won’t be completely gone from restaurants, cafes and bars just yet, as many will still be using up their stock. But many companies have already started the transition so they’re prepared once they can no longer buy these products.

Bognar said Service Inspired Restaurants recently transitioned to bamboo takeout cutlery, and has started asking people whether they want cutlery at all.

But one of the biggest challenges has been finding new takeout containers.

Bognar said they were using recyclable plastic ones, but found that they couldn’t be recycled in all jurisdictions, so the company tried out other options, eventually settling on a waxed cardboard takeout box that is both recyclable and biodegradable.

He had employees and some customers test out different containers, covering the delivery charge in exchange for feedback.

But not all restaurateurs are ready to make the transition ahead of schedule.

Many businesses still have large stockpiles of plastic containers to use up, and may even have extra after the COVID-19 lockdowns.

Buying new containers was the last thing Oyster Boy owner Adam Colquhoun had on his mind heading into the new year as he was dealing with the holiday rush at his Toronto restaurant.


Like many restaurants, he said he has a “basement full” of containers he needs to use up before thinking about what he might permanently replace them with, though he said his co-owner did source some compostable containers during the pandemic.

“I’m just ignoring it for now and I’ll look at it sometime in late January when I have time,” Colquhoun said.

Colquhoun is among those who feel as though the single-use plastics ban is a small thing, a band-aid solution of sorts, amid the larger forces causing climate change, and said he feels like small businesses are often the ones paying the price.

How to live a zero-waste lifestyle: Small steps toward a greener future

There was a lot of enthusiasm for greener options in the food service industry pre-pandemic, said Kelly Higginson, chief operating officer of industry group Restaurants Canada, but more recently it’s become another pressure on businesses.

Restaurateurs can choose from a wide variety of new options made from materials including bamboo, oats, corn, rice and paper, said Higginson.

The switch could increase the cost of some items by up to 125 per cent, she said, adding there are also concerns about supply chains and the quality of the products.

“We want something that is high quality, that is sustainable, that isn’t costing too much. And right now, there are some of those items on the market,” she said. “It’s just a matter of how much and getting your hands on it.”


While the new items are generally more expensive, Bognar is optimistic that as they become more common the prices will drop. Even the supply chain problems are starting to ease, he added.

However, he acknowledged it’s easier for large restaurant groups like Service Inspired Restaurants to source and test new products, while independent restaurants are at a disadvantage.

International companies have a head start on the transition, said Higginson, as some countries and jurisdictions have already made a similar switch.

In the coming months and years, Higginson is hoping for more consistency between levels of government; while the law is federal, there are often different rules on a local level about what is accepted as recyclable, for example.

She also wants to see more education from the government on how consumers should dispose of these items properly.

“That’s been a frustration of our members,” she said.

“They’re being forced to buy these higher-cost items and struggle with some supply chain issues, but then, you know, the consumer isn’t recycling them properly, or isn’t composting them properly.”