Manunor wants to do more

In: News
Tagged: Manunor
With: 0 Comments 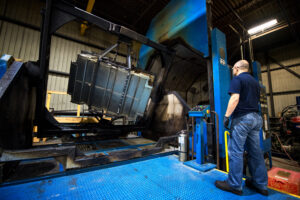 If plastics processing can be compared for a moment to The Beatles, then rotational molding is George Harrison – the quiet one, often flying underneath the radar. But as with Harrison writing such classics as “Something” and “Here Comes the Sun”, rotational molding, also known as rotomolding, can surprise you sometimes. A case in point is Sherbrooke, Que.-based rotomolder Manunor, which has been making some noise of its own over the past several years by designing and manufacturing a series of innovative products, building a new 10,000-square-foot facility adjacent to its main 90,000-square-foot plant in Sherbrooke’s Gene H. Kruger Industrial Park, and investing in new machinery that includes a massive new rock n roll machine from equipment supplier STP Rotomachinery.

Manunor was founded in 1993 by Jacques St-Pierre, who’s impact in the rotomolding world is considerable – he had previously founded STP Rotomachinery in 1988, which is also headquartered in Gene H. Kruger Industrial Park, and which makes independent-arm machines, fixed-arm machines, in-line shuttle machines, three- and four-sided sided shuttle machines, rocking ovens, lab machines, and a range of rotomolding accessories. Jacques St-Pierre was serving as Manunor’s CEO when Manunor entered a very busy period beginning in 2014, which is when it broke ground on its 10,000-square-foot expansion and also developed two new innovative products. The first was a parts washer to be used by machine shops and vehicle repair shops that was entirely designed and developed in Sherbrooke; with this equipment, oil and grease can be thoroughly cleaned without contaminants. The second was an innovative technology for rotomolding stand-up paddleboards for the Quebec-based manufacturer Pelican, and which began large-scale production in fall 2014.

Fast forward to today and the firm’s busy period continues basically uninterrupted save for a brief, unavoidable pause during the early days of the COVID-19 pandemic. Jacques St-Pierre has retired from Manunor – and he sold STP Rotomachinery in 2005 – and his daughter Marie-Michelle St-Pierre now serves as Manunor’s general director and CEO, having joined the firm in 2012. Unlike with some family-owned firms, however, her long-term involvement wasn’t a given. “I basically grew up at Manunor, working here on weekends and during summers while I was in high school, but it wasn’t clear that I was going to stay here for my career,” Marie-Michelle said. “I studied mechanical engineering at Sherbrooke University and worked at co-op programs in a number of different businesses, big and small, in other sectors, because I wanted to see what other opportunities were out there. I took some time to really think about whether or not I wanted to join Manunor after I graduated. So, when I finally decided to do it, I was fully committed.” 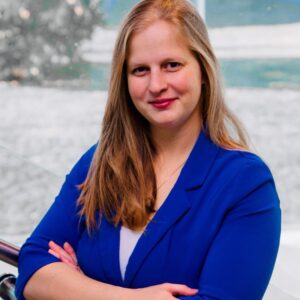 Marie-Michelle currently runs Manunor with her partner Mathieu Rouleau, who has been with Manunor as technical director since 2012. The couple became Manunor’s owners in 2017.

Manunor currently employs about 45 workers, has annual sales that exceed $10,000,000, and has a long list of North American customers, primarily in Quebec, Ontario, and the northeastern U.S. “We make more than 300 products in more than 20 sectors of activity, including kayaks, paddleboards, containers, tanks, indoor and outdoor toys and games, and parts for vehicles such as buses and ATVs,” Marie-Michelle said. “We do everything to make a finished part, from molding to assembling to packaging; and we’re very active in product and manufacturing process development, thanks to our team’s innovative spirit and expertise, which helps maintain a leading edge. The parts washer program that we developed in beginning in 2014, for example, is an in-house proprietary product that introduced an innovative solution to the market.”

The company currently has seven rotomolding machines, all supplied by STP Rotomachinery. The newest machine, installed in August, is a rock n roll rotomolding machine with two sides and two completely independent arms, and is a total of 18 feet long with a 100-inch diameter. “It’s our longest rotomolding machine – and actually the longest currently being anywhere in Quebec – and it fits between our largest rotomolder, which has a 120-inch diameter, and our smallest, which has an 80-inch diameter,” Marie-Michelle said. “We’ve always used STP machines – the company has a great reputation in the sector and it’s local as well, so parts and service are easy to obtain.” 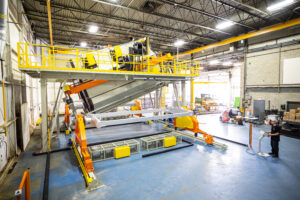 For the uninitiated, rotomolding differs from other plastics processing methods like injection molding, thermoforming, and extrusion in that it works in layers. The virgin material and powdered colourant are poured into the mold; the mold is then closed tight, placed in an oven, and rotated at an even speed. In this way, the plastic is laid down in thin layers of even thickness, regardless of whether or not the mold features corners and curves. After the material is baked, the plastic is cooled inside the mold to ensure that it hardens evenly, and then extracted.

That said, not every plastic part is suitable to be rotomolded. “The part chooses the process, not the other way around – it depends on the function you want,” Marie-Michelle said. “Injection molding might be able to accommodate complex designs but it can’t create hollow products. And compared to blow molding, which does create hollow products, rotomolding offers denser walls and thicker corners, which some parts demand. So, if rigidity and strength are important – like for products that are meant to be used in rugged environments or places with high temperature – rotomolding might be the better choice.”

Other advantages, she continued, include low-cost tooling in either aluminum or steel; consistent wall thickness; double-wall construction; high durability, since the parts are molded as one solid piece; high stability; and a great appearance, since rotomolding can accommodate surface finishes such as textures, logos, symbols, and lettering. And unlike competitive processes such as blow molding and thermoforming, rotomolding produces no pinch-off seams or weld lines, which gives a finished product without the use of secondary processes. “It’s the best method for making large, one-piece hollow parts and double-walled open containers such as tanks, kayaks, and coolers,” Marie-Michelle said.

Rotomolding also differs from other plastics processing methods as far as business strategy goes. “There really aren’t many rotomolding shops in Canada, or North America, so there’s enough room for everybody,” Marie-Michelle said. “Most of us belong to the Association of Rotational Molders, we all know each other, and we typically don’t compete against each other – we compete against manufacturers making products in other materials, such as metal, that are better suited to rotomolding. These are the new accounts that we want.” And even here, there’s a built-in limitation as to which new accounts to pursue, based on part dimensions and geography. “Rotomolded parts tend to be large and hollow, which makes them expensive to ship because you’re shipping a lot of air,” Marie-Michelle said. “So, it doesn’t make economic sense for us to pursue new business that’s too far away – in the southern U.S., for example, or western Canada. Rotomolders keep to their own regions.”

Rotomolding machines take up a lot of space, which cushioned the blow at Manunor slightly when the pandemic hit. “We didn’t have to shut any lines down or reconfigure our operations to create social distancing on the floor because our workers were already spread out,” Marie-Michelle said. “Like almost every other manufacturer in Quebec, we had to close for about five weeks in March-April 2020, at the very beginning of the pandemic, but after that we were able to carry on as usual.” And even during that forced lockdown, the company still managed to create something. “We worked with a customer to design an outdoor handwashing station that could be used safely during the pandemic,” Marie-Michelle said. “We designed the part, built the mold, and began rotomolding the product, all in six weeks. We’ve delivered about 3,000 units since then.”

With the second generation of leadership now firmly in place at it marks 30 years in business, Manunor wants to keep growing. “We’re constantly meeting with companies that are making metal parts and working to convert them into plastics,” Marie-Michelle said. “We’re very diverse – anything that can be rotomolded, large or small, we can do it, and we want to build on that and keep expanding our product range.” The company also want to draw more attention to rotomolding, period. “Rotomolding isn’t as well-known in the plastics space as it should be,” she said. “We want to help change that, and we bring local students in for tours as often as we can, to show them what our process is all about. We love rotomolding and we want more people to love it too.”

2023-01-16
Previous Post: To predict environmental changes, researchers create a new generation of wireless sensor networks
Next Post: How SAP is helping India’s startups reach the next level in their scale-up journey