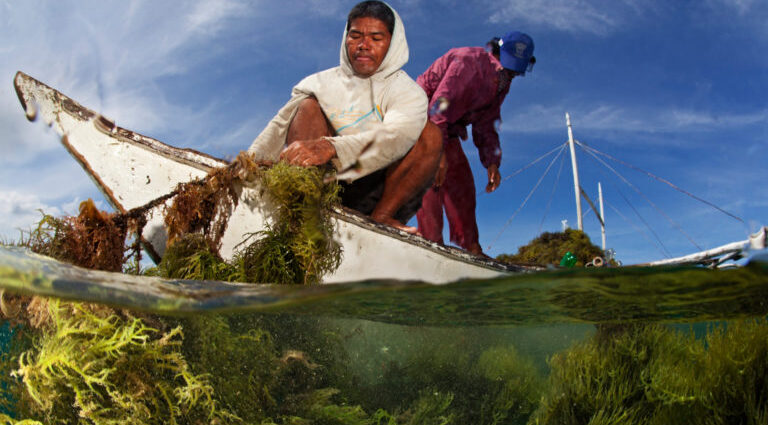 Seaweed, a common name for thousands of marine plants and algae found in different water bodies, not only provides food and shelter for marine animals, but it can also help solve the plastic pollution problem. Materials researchers from Flinders University in Australia and German biomaterials developer one • fıve have developed a new nonpolluting seaweed-based coating material “designed to replace conventional fossil-based plastic coatings used in grease-resistant fast food packaging.”

The initiative aims to transform the global packaging and plastics industry by significantly reducing reliance on highly pollutive conventional plastic, according to Flinders University’s media release.

The packaging used to wrap the hamburgers, fries and chips we order from fast food establishments is typically laminated with a thin layer of plastic in order to make it grease-resistant. However, this poses a problem in terms of recycling, as this layer is typically made of synthetic polymer, which is derived from petroleum, such as polyethylene or polypropylene. This does not biodegrade and it breaks up into smaller pieces called microplastics.

The one • fıve and Flinders researchers have developed an alternative: a seaweed-based coating that is not made from synthetic polymer. This fits with the goals of recently proposed revisions to EU rules for packaging and packaging waste. The main objectives of the proposed rules are to prevent the generation of packaging waste, to boost high-quality “closed loop” recycling, and to reduce the need for primary natural resources and create a well-functioning market for secondary raw materials that will increase the use of recycled plastics.

A number of conditions have to be met for biodegradable and compostable plastics to have positive environmental impacts. First, the biomass used to produce biobased plastics must be sustainably sourced. Second, the biodegradable plastics must be approached with caution and should not be used as an excuse to litter. Lastly, industrially compostable plastics will be allowed for only some products and should be used only when they have environmental benefits, they do not negatively affect compost quality and there is a proper biowaste collection and treatment system in place.

According to Zhongfan Jia, lead researcher from the Flinders Institute for Nanoscale Science and Technology, the seaweed-based coating material they developed uses natural polymer rather than fossil fuel-based products. Contrary to synthetic polymers, natural polymers occur in nature and are extracted from plants or animals. The new coating material is derived from sodium alginate — which is obtained from brown seaweed and typically used as a thickening agent, gelling agent, emulsifier, stabilizer and texture-improver.

As Jia explained, seaweed extracts have a similar structure to the natural fibers from which paper is made. Simple chemical modifications were made to enhance the grease and oil-resistant properties in order to hold fast food items for a certain period of time.

“Basically, we just do simple modifications but maintain the biodegradable or biocompatible properties of the seaweed polymer just to afford a little bit of extra properties,” said Jia. “So for this polymer, because they have a very similar structure to craft paper, therefore, potentially, there is no problem for this to be recycled to make new paper.”

Although the biomass for the new coating formulation is made from natural polymers extracted from seaweeds that are native to the South Australian coastline, Jia said it is also possible for other countries to adopt this technology.

“[If] we can extract [it] here, we don’t need to import the seaweed from somewhere else. But this doesn’t mean that [seaweed from] somewhere else cannot be used,” said Jia. “You grow that seaweed and extract that polymer because there’s no point if they don’t find their applications.”

In different countries, seaweed is used for a variety of applications. In Japan, Korea and China, seaweed is used as food for human consumption — fresh, dried or as an ingredient in prepared foods. In Indonesia, it is used in making edible cups and food wrappers, among other items, to address the plastic waste problem. It can also be used for industrial purposes by extracting alginate, agar and carrageenan, which are thickening and gelling agents.

Seaweed and bioplastic in the Philippines

In the Philippines — one of the world’s leading producers of aquatic plants — researchers are already developing new solutions to the plastic-wrap problem in addition to many other uses for seaweeds. Since the 1970s, commercial seaweed farming has turned into one of the Philippines’ most important coastal enterprises, which supports more than 200,000 families. More specifically, it is valued for carrageenan, a gelatin-like additive used as a thickening agent and stabilizer for many food and cosmetic products such as whipping cream, chocolate milk and ice cream, among many others.

In 2019, a Filipino named Denxybel Montinola made headlines when he developed a bioplastic film using mango and seaweeds — both of which are raw materials that are abundant in the country. He showcased his invention in the 2019 DOST-BPI Science Awards competition and he was one of the 30 outstanding college students who received an award for their scientific research and innovations.

“Seaweed actually grows really quick, so we can just use it safely and sustainably. Nowadays, we are really critical about sustainability, so we really want to use a raw material that wouldn’t harm the environment, and that’s seaweed,” Montinola told Mongabay.

Seaweeds are “primary producers,” meaning they get energy from sunlight and necessary materials from nonliving sources. They are quick-growing at about 30-60 times faster than land-based plants.

Mango, the Philippines’ national fruit, is the third-most important fruit crop in the country. In 2015, the country ranked seventh in exports of fresh and dried mango.

As Montinola explained, the bioplastic he developed is made by processing the raw materials to extract its polymers — carrageenan from seaweeds and pectin from mango peelings. These polymers were combined without using a plasticizer, which is an artificial component in making the material as elastic as petroleum-based. Hence, it is biodegradable.

“In my case, in my invention, if you submerge the bioplastic in water it completely dissolves to its raw material, which are just the polymers of seaweed and mango peels. So it doesn’t really turn into microplastics, like the traditional petroleum-based plastics,” Montinola said.

According to Montinola, his invention utilizes an environmental waste since mango peels are a byproduct of mango production. Using this rather than letting it rot can further create additional income for farmers if the mango-seaweed bioplastic production becomes an industry.

Similar to Jia, Montinola agrees it is possible for other countries to adopt his technology, depending on their ability to produce or procure the raw materials needed.

“If the country doesn’t really produce mangoes or seaweed, they could try other raw materials as well. … Seaweed is a resilient material that can grow in tropical countries or in cold places. So I think it’s really good to start with seaweed as the base of the biofilm,” said Montinola.

The biocoating materials for fast food packaging developed by Flinders University and one • fıve are aimed at commercial use. However, according to Jia, they are still working toward laboratory-scale processing to produce industrially relevant volumes of the natural polymer coating.

“What we are trying to do is to hopefully formulate the product that can be adapted to the current industry production line. … That can make commercialization faster and cheaper because you don’t need to build [a] new factory,” said Jia.

The research stage is finished and the idea is working in the chemistry lab, Jia said. So the next stage is testing the safety of this coating to make sure it meets regulations for food contact materials (FCMs), which are materials that come in contact with food before consumption, including packaging and containers. These FCMs must comply with regulations in order to ensure a high level of food safety.

“Extra [precautions] should be taken for safety to meet local requirements for different countries — they have different regulations for their food, so that’s also extra time for this one to be finally on the market,” said Jia.

Similarly, in Montinola’s bioplastic film, the goal is to make it commercially ready. However, there are hindrances along the way, such as the unavailability of funding and technical issues in producing the biobased plastic compared with traditional petroleum-based plastics.

“Traditional plastics use extruders to create single-use plastic bags, but it is still an open question if we can use the same material or production process if we use a biobased plastic,” said Montinola.

As of writing, Montinola is looking forward to kickstarting the project this year with the goal of commercializing it. Aside from providing sustainable alternatives to conventional plastics, production of these biobased plastic coatings and films could also help create livelihoods.

“I think we’re going to produce business to our farmers who are doing seaweed farming,” said Montinola. “Also, I think, we could create another industry or sector of producing biobased plastic.”

Using seaweeds in commercially available bioplastic coatings and films could prompt the industry to extract more polymer, which will consequently result in an increased demand for seaweed.

“If the industry needs more polymer from seaweed, then it will drive the farmers to grow the seaweed. So it’s like a chain industry,” Jia said.

Seaweed farming in the Philippines’ Palawan island has not only helped uplift the socio-economic condition of families but it has also built a sense of community. It has empowered women who engage in seaweed farming by enabling them to help put food on the table andalso to pay for their children to go to school. Seaweed farmers also play an important role in the protection of marine life.

Thus, Montinola called for the government to make funding more accessible to innovators.

“For the youth, we are in the era of social media. … There are problems that are really important to be solved, and I think we should sometimes focus on that problem, and amplify the voices of the young innovators and young activists to really make a change in the world,” Montinola said.