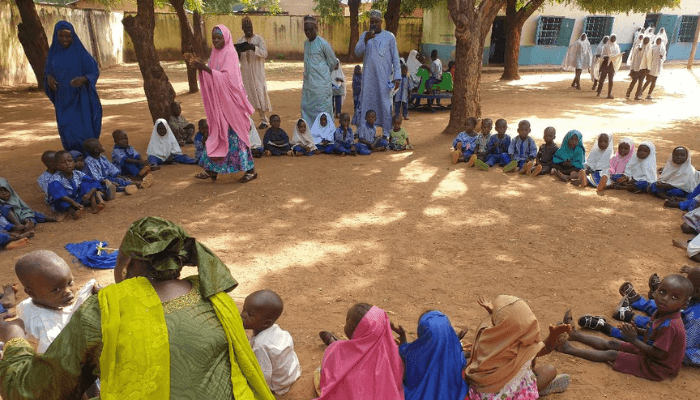 The importance of preschools cannot be overemphasised because preschool education forms an integral part of a child’s early education.

The crèche and kindergarten education of a child provides for the child’s health and intellectual and social well-being.

No doubt, making early childhood education effective, functional, and appropriate rests on every Nigerian, however, the major part of this responsibility lies on the threshold of the government.

Many foundational schools in Nigeria do not ordinarily have what it takes to be reckoned as schools.

A visit to Ajegunle in Ifelodun, Ijegun, and Ikotun in Alimosho Local Council Development Areas (LCDAs) of Lagos State, and other similar informal settlements where crèche/kindergarten schools are erected in unhealthy environments will leave one wondering whether there are actually people positioned to monitor such.

Imagine schools for infants with dilapidated windows, doors, and deplorable floors. While for some it was a case of contaminated ponds surrounding the school compound.

Roseline Abiodun, the proprietress ESDAM Nursery and Primary school, Lagos acknowledged the fact that the ministry of education in Lagos State has laid down rules and regulations for ownership and operation of crèche, nursery, and kindergarten schools.

Abiodun explained that there is a body known as the Quality Assurance Unit under the Lagos State ministry of education responsible for monitoring and enforcing compliance.

Elizabeth Ohaka, the learning director of Redwood Academy at Ilamoshe suburb area of Lagos affirmed the word of Abiodun when she said that the state government has clearly stated guidelines for operating crèche, nursery, and kindergarten schools.

According to her, “Such a school must have childproof facilities, fire extinguishers, safety measures, fenced environment, clean environment, and sick-bay, among others.”

A staff of the ministry of education, Lagos State also affirmed these claims thus, “Yes, there are guidelines for running and ownership of crèche, nursery, and kindergarten schools in Lagos. These include the building structure, sickbay, and library with government-approved books, among others.

“But he stated that state government has not really been shutting down schools as such, simply because they choose not to be punitive but rather to be corrective bearing in mind that those private schools augment government’s efforts in providing learning platforms.”

Furthermore, he said, however, that if the environment is horrible, the state government would be left with no other option than to shut down such a school.

“They do not really punish offenders, because if they come, it is a correctional thing; but if the person refuses to obey their instructions, then, they will close the school,” he said.

Consequently, the Lagos State government came up with certain rules governing the ownership and effective running of private crèche, nursery, and kindergarten schools in the state.

The checklist cut-across the building structures, classrooms, teachers’ quality, etc. The state government demands that a building for a crèche/kindergarten must be structured to suit the purpose with an approved building plan or rented building with at least a five-year lease agreement.

There must be at hand a Certificate of Occupancy (CoC). Besides, the approval policy also demands that the minimum land requirement in standard plots of 60’X120’ (18.29m X 36.58m) for nursery schools shall be one. The building and premises shall be certified as suitable by the ministry of physical planning and urban development.

The physical facilities should have a minimum of 5 special rooms, for example; 1. Library with copies of Lagos State-recommended textbooks suitable for all levels. 2. Sickbay with two (2 ½ by 6 single) wooden beds.

There must as well be on-ground evidence of affiliation to a government-recognised hospital close to the school. A well-equipped first -aid -box with a certified paramedic or a first aider, and a functional weighing scale.

A maximum of 25 pupils in the nursery section with a ratio of 1:8 (1 adult to 8 pupils, one qualified teacher with a teaching assistant, and 35 with two adults, at least one professionally qualified teacher and an assistant in the primary. The minimum dimensions of each classroom shall be 2.4m (height) x 8.4m (length) x 6.8m (width).

A standard classroom should provide an average floor space of 1.2m2 or metre square per student. A pro-rata floor space may be applied where classes contain fewer or more students.

The classroom furniture shall include low, round-edge tables with single seats adequate in size for the age of the pupils.

The availability of functional makers with boards/interactive boards is optional. However, all classrooms shall be well-lit and ventilated and shall normally have two doors and four windows.

The school must have 6 toilets with water cistern (w/c) and tiles suitable for all levels indicating clear signs for male and female toilets.

Certificates of medical fitness of food vendors. There must also be portable water and wash-hand basins in strategic places in the school. Adequate provision must be made for specially challenged pupils.

There must be posted signs on personal hygiene and waste bins with cover in strategic places, besides the school must have a well-channelled drainage system.

The school is expected to have one general and one electrical functional fire extinguisher and four sand buckets in strategic areas in the building. Safety signs with related instructions are to be affixed on the school walls.

Moreover, there must be evidence of school policy on child protection, and samples of identification given to parents or guardians.

Also on the demand list is a well-plastered fence with a manned gate for security and an opportunity to register at the gate and a record book on fire drills. Boldly printed vision and mission statements of the school clearly displayed in the school, etc.

The officer in the ministry of education in a chat reiterated that obviously where there are rules, there are punishments. And that the ultimate punishment for none adherent school owners is to shut down the schools.

“The state government is not cut for punitive measures on this. The quality assurance officials are basically to advise owners on what to do and at the extreme, the school is closed”, he said.

However, a school owner in Itire-Lawanson who spoke with BusinessDay said that sometimes people are taken to court, except they settle the authorities.

“There are punitive measures; they could take one to court for violating the rules, the ultimate punishment however is to close down the school. But because of the ‘lubrication’ exercise that goes on in between, these processes are not followed to the letter,” he said.

Moreover, he explained that the key issue here is that many people before now do not know what is expected of them.

Hence, the government’s core duty is to engage the people and expose them to information on how to go about things.

“In times past, many people had been exploited by some supposed government agents and agencies. So the state government is educating and encouraging the people more on their rights, responsibilities, and benefits in registering their schools,” he said.

The officer further explained that by the standard set by the government, many schools are approvable; hence such schools are encouraged to do the right things rather than raising the hammer at them. They are just asked to put the right things in place and get registered.

He noted that the responses of many school owners concerning hygienic learning environments have been interesting and encouraging compared to what they used to be in the past.

However, he stressed that as expected some schools are still defaulting,

“Yes, there are offenders, and they have their reasons. Some people would not like to do what is right no matter what you do to encourage them,” he said.

However, a fact remains that exposing children to an unhealthy learning environment comes with consequences such as poor respiratory health, coughing, and asthma, among others.

Without any doubt, this can negatively impact children’s education, with increased absence from school. In the long run, it will have a concomitant negative on society in general which will in turn have a negative impact on the economy. Productivity is reduced through work loss as adults care for their sick children.

Consequently, the concerned agencies and government need to rise to the challenge and ensure that every child is educated in a health-friendly environment.

Those monitoring the erection of private schools should bear in mind that posterity will never forgive them should they trade and mutilate the future of a Nigerian child on the altar of lucre.