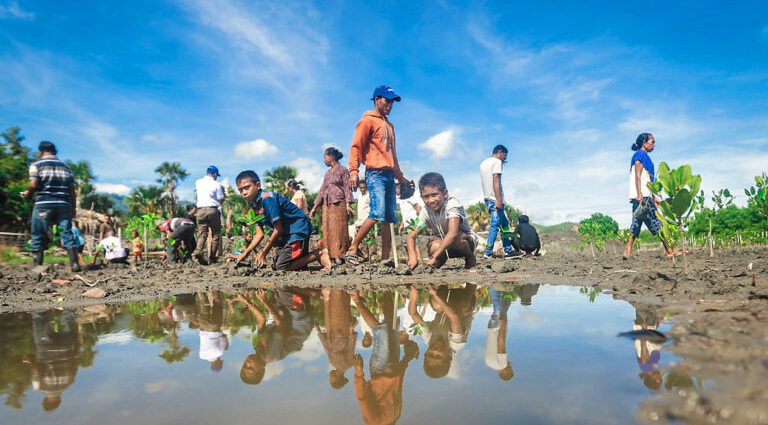 The implementation of nature-based solutions, or NbS — a hotly debated concept that has gained traction in recent years — is seen by many policymakers as a potential means for allowing nature to aid humanity in curbing global climate change, biodiversity loss and other rapidly escalating planetwide environmental problems.

However, these and other analysts warn that NbS initiatives can’t be successful in meeting these key goals if they lack biodiversity and human rights safeguards at their core. NbS is controversial, they note, because poorly defined and planned initiatives can harm natural systems and human communities, even as companies, financial institutions and other organizations use them as a means of greenwashing and to help meet profit objectives.

NbS rose rapidly to political prominence in the past year; it was included within the final cover decision of the COP27 U.N. climate summit held last November in Egypt, and figured notably in two targets of the Kunming-Montreal Global Biodiversity Framework (GBF) at the COP15 U.N. biodiversity conference in December, held in Canada.

Also importantly, in March 2022, the U.N. Environment Assembly (UNEA) passed a resolution adopting a multilaterally agreed-upon definition for NbS, describing it clearly as:

The UNEA resolution also called on the U.N. Environmental Programme (UNEP) to support the implementation of nature-based solutions that safeguard the rights of communities and Indigenous peoples.

“Biodiversity should not be considered as a ‘co-benefit’ to NbS, but rather as an underlying property of successful NbS,” said Audrey Wagner, head of the University of Oxford’s COP15 delegation and program coordinator for the nature-based solutions initiative at the university. She told Mongabay-India that “NbS will not be able to provide the benefits that we expect and need from them (e.g. climate adaptation, climate mitigation, disaster risk reduction, water security, etc.), if they are not underpinned by biodiversity. There are no nature-based solutions without biodiversity. That is why implementing NbS must always support or enhance biodiversity, by definition.”

The UNEA definition gained in importance during the grueling two weeks of talks at December’s COP15, where there was mounting apprehension over the potential for misuse and abuse of NbS as a greenwashing mechanism by companies to offset business-as-usual carbon emissions. By the meeting’s end, NbS was ultimately included in two targets adopted by the parties (196 nations in total) within the Convention on Biological Diversity (CBD), originally signed by 150 governments at the 1992 Rio Earth Summit.

Despite this adoption of NbS, countries in the Global South, such as Bolivia and India, continue to be skeptical, fearing that its inclusion in the CBD text, and its scaling up as a major policy, could pave the way for land grabs and the commodification of nature.

At COP15, Wagner called for the parties to commit to using the NbS definition to qualify proposed initiatives, ensuring that projects involving monocultures (such as tree plantations touted as forest restoration), land grabs or human rights abuses are not labeled as NbS.

“We must call these projects out, and those behind them, to avoid NbS being co-opted,” Wagner told Mongabay. “Further research, learning and sharing must continue in order to develop knowledge and guidance on how to scale up NbS in the most effective and equitable ways, for biodiversity and people, and how to minimize tradeoffs and learn from past mistakes.”

Manuel Pulgar-Vidal, global leader for climate and energy at WWF International, who was at COP15, concurred with Wagner’s concern: “The nature-based solutions concept is grounded in the science and practice of the ecosystem approach, helping to grow its reach among new sectors and communities of practice,” he said. “NbS are not an attempt to turn nature into a commodity to be traded. They are not an offset mechanism to give the buyer a free pass to destroy nature. They are not monoculture plantations, nor a means to disenfranchise Indigenous peoples and local communities.”

Wagner said she wants to see multilaterally agreed-upon criteria for NbS adopted by all U.N. signatories, an approach that would complement and strengthen the UNEA NbS definition. The Global Youth Biodiversity Network also stressed the need for multilaterally agreed-upon criteria for NbS implementation, similar to the NbS Guidelines and to the IUCN Global Standard criteria, but enshrined in a U.N. agreement.

While precise wording regarding natural and human rights safeguards wasn’t included in conjunction with NbS in the Global Biodiversity Framework text, “We do see very good safeguards and very strong rights-based language across many of the other targets in the GBF,” noted Pulgar-Vidal.

“There is always further work to be done when it relates to protecting the rights of Indigenous peoples and local communities,” he added.

Suneetha M. Subramanian, a coordinating lead author on various assessments of the Intergovernmental Science-Policy Platform on Biodiversity and Ecosystem Services (IPBES), told Mongabay-India that “vigilance would need to be exercised.”

“It is possible to misrepresent actions that may not be biodiversity friendly as complying with nature-based solutions. For example, promoting monocropping or single species plantation forestry can be marked as afforestation but may create more … ecological and socio-cultural [harm],” said Subramanian, a research fellow at United Nations University’s Institute for the Advanced Study of Sustainability.

According to UNEP’s “Decent Work in Nature-based Solutions 2022” report, NbS “are increasingly seen as a way to meet the objectives of several global agreements,” including the U.N. Framework Convention on Climate Change (UNFCCC); the CBD; the U.N. Convention to Combat Desertification (UNCCD); as well as the U.N. Sustainable Development Goals (including SDG 8, ensuring decent work and economic growth; SDG 15, protecting life on land; and SDG14, protecting aquatic life).

The report, co-published by the International Labour Organization (ILO) and the IUCN, the global wildlife conservation authority, found that nearly 75 million people are already currently employed globally in NbS, with the vast majority (96%) living in lower-middle-income countries in Asia and the Pacific — even as the majority of global NbS expenditure still occurs in high-income countries.

Many of these current NbS jobs are part time, with total employment estimated to be around 14.5 million full-time-equivalent jobs.

However, the report acknowledges that some, though not all, NbS work can be considered decent work, and only a portion of NbS employment opportunities are truly green jobs, underscoring the need for the design of a just transition framework to create meaningful work opportunities and leave no one behind.

Increased attention to job quality and human rights is crucial because a tripling of investment in NbS by 2030 could create an additional 20 million jobs worldwide, according to the UN “State of Finance for Nature 2021” report.

Still, Indigenous leaders and many NGOs continue to express concerns regarding NbS implementation, particularly in the Global South.

“The supporters of NbS are promoting the concept in order to avoid changes in their current mode of business, to distract from the need for drastic and urgent emissions reductions, and to allow them to carry on polluting,” wrote members of the Third World Network in a letter to government ministers at COP15.

During a panel discussion in the starting week of COP15, Thomas Joseph, a member of the Hupa Indigenous people in the U.S., called nature-based solutions “just a continuation of colonialism to commodify our Mother Earth” and “to access unseated territories of Indigenous peoples.”

Joseph added that NbS is not “a climate solution” but a “public relations scheme,” explaining that “When we continue to commodify our Mother Earth as a mechanism to be used to solve the climate crisis that we are facing, or to protect biodiversity, we’re using the same concepts and steps that got us in the climate chaos [crisis] in the first place.”

In a press release, the Global Forest Coalition expressed concern that the “final [GBF] agreement opens the door widely to private sector financing of biodiversity policy, including through false solutions like biodiversity offsets and so-called ‘nature-based solutions,’ which is code language for the carbon offset market.”

Mongabay Newscast episode ‘Are ‘nature based solutions’ the best fix for climate change?’ from Mar., 2022: