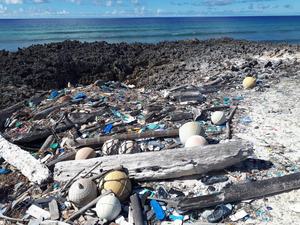 Vast amounts of plastic debris accumulate on beaches across the Seychelles and other small island developing states. Observational analysis (for instance, plastic bottle labels) suggest that much of this waste originates from distant sources and not from the islands themselves. But until now, the likely sources of this debris have not been quantified.

A new study led by the University of Oxford investigated this by developing a high-resolution model that simulated the movement of plastic debris across the world’s oceans. This used input data on ocean currents, waves, and winds, and plastic debris entering the ocean from coastal populations, rivers and fisheries, to predict plastic debris accumulation at 27 sites in the Seychelles and wider western Indian ocean. The results have been published in Marine Pollution Bulletin.

The researchers modelled the likely sources of both land-based and marine types of plastic pollution.

This is the first study to produce a quantitative estimate of the sources of plastic debris for the Seychelles and other remote islands in the western Indian Ocean. Such plastic pollution is a significant environmental threat, both for marine ecosystems and the communities that depend on the ocean for food, tourism, and other economic activities. In addition, plastic debris that drifts from far-off sources increases the risk of spreading invasive species and diseases.

A previous study led by University of Oxford researchers estimated that over 500 tonnes of debris had accumulated at Aldabra Atoll in Seychelles, an ecologically valuable UNESCO World Heritage Site with zero permanent population.

Lead author of the current research, Noam Vogt-Vincent (Department of Earth Sciences, University of Oxford), said ‘We have combined observational data from across the Seychelles with cutting-edge computer simulations to generate the most comprehensive predictions currently available for marine litter dispersal in the region. This will provide vital information for local management on these islands – many of which are global biodiversity hotspots – and to inform national and international responses.’

According to the researchers, the results illustrate the sheer scale of the plastic pollution challenge facing small island developing states, and makes the need for a global plastic treaty more urgent than ever. This could include, for instance, greater enforcement of policies that forbid the disposal of fishing gear and other plastics at sea. The findings also build on the ever-growing evidence that investing in waste management systems and implementing policies for waste disposal at the main source nations is the number one action to prevent land-based litter arriving at remote island sites.

Co-author Dr April Burt (Seychelles Islands Foundation and University of Oxford) said: ‘These islands are faced with the deeply inequitable situation of bearing the costs of removing waste they were not responsible for generating, contrary to the “polluter pays” principle. Our study has demonstrated that most of the plastic debris accumulating at these remote islands comes from far-off sources, and this should be the first positive step towards accountability and prevention.’

The study also involved researchers from the University of Montpellier; the Institut de Recherche pour le D’eveloppement, MARBEC; and the Okinawa Institute of Science and Technology.

The study ‘Sources of marine debris for Seychelles and other remote islands in the western Indian Ocean’ has been published in Marine Pollution Bulletin: https://www.sciencedirect.com/science/article/pii/S0025326X22011791

Photographs of plastic waste debris on beaches in the Seychelles are available on request. Contact Dr Caroline Wood, University of Oxford: caroline.wood@admin.ox.ac.uk.

A video simulation showing the dispersal of plastic waste across the Indian Ocean over a four-year period can be found here: https://www.youtube.com/watch?v=ma0wlFfA6dI

This can be linked to in news items if the following caption is included:

Caption: A four-year debris dispersal simulation using the numerical model developed in this study. Debris continuously enters the ocean from coasts and rivers, and is transported by ocean currents, waves, and winds. The colours represent the concentration of debris at the ocean surface, and the animation shows how the distribution of debris in the Indian Ocean is strongly driven by the monsoons. Video credit: Noam Vogt-Vincent.

About the University of Oxford

Oxford University has been placed number 1 in the Times Higher Education World University Rankings for the seventh year running, and ​number 2 in the QS World Rankings 2022. At the heart of this success are the twin-pillars of our ground-breaking research and innovation and our distinctive educational offer.

Oxford is world-famous for research and teaching excellence and home to some of the most talented people from across the globe. Our work helps the lives of millions, solving real-world problems through a huge network of partnerships and collaborations. The breadth and interdisciplinary nature of our research alongside our personalised approach to teaching sparks imaginative and inventive insights and solutions.

Through its research commercialisation arm, Oxford University Innovation, Oxford is the highest university patent filer in the UK and is ranked first in the UK for university spinouts, having created more than 200 new companies since 1988. Over a third of these companies have been created in the past three years. The university is a catalyst for prosperity in Oxfordshire and the United Kingdom, contributing £15.7 billion to the UK economy in 2018/19, and supports more than 28,000 full time jobs.

Disclaimer: AAAS and EurekAlert! are not responsible for the accuracy of news releases posted to EurekAlert! by contributing institutions or for the use of any information through the EurekAlert system.