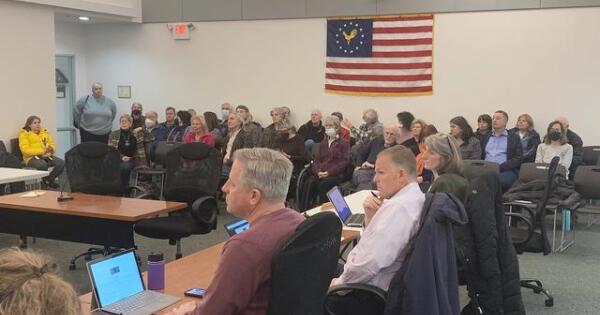 After more than an hour of pleas to not repeal local ordinances on fracking and plastic shopping bags during public hearings January 18, the Legislative Council decided to repeal both measures on split votes.

The vote on a third proposed repeal, a town ordinance concerning Board of Education elections — which has since been codified in the Town Charter — was delayed until a future meeting while council members looked into some legalities related to the applicable charter revision.

Dozens of people packed the Municipal Center’s Council Chambers to attend the public hearings that saw four people speaking in support of the fracking ordinance and nine people speaking on the plastic bag ordinance.

Following the hearing, the council convened its regular meeting and subsequently voted to repeal the fracking ordinance 8-3, with Michelle Embree Ku, Chris Gardner, and Dan Honan voting against.

Knapp said these proposed repeals came in the wake of a forestry ordinance repeal, which he said the state asked the town to consider because it clashed with statutes prohibiting towns from having such ordinances.

“There are some areas the state has carved out where they want consistency across all 169 towns,” said Knapp.

Cathy Quinn, chair of the town’s Sustainable Energy Commission, said she participated in developing the original fracking ordinance, when there was no state guidance or statutes around fracking. Newtown was one of 37 towns that passed an ordinance.

Quinn said she opposed the repeal because she does “not trust the state to not step back and loosen its ordinances.”

“My belief is that it should stay in place; it’s not hurting anything,” Quinn told the council.

Refocusing, Knapp said that as many mentioned in the hearing, a lot of work went into the plastic bag ordinance and he personally supports a ban on plastic bags. However, he felt “the town should not be in the business of telling a business how much it should charge for any product,” referencing a provision in the ordinance requiring stores to charge ten cents each for paper shopping bags.

“While this may have been well intentioned, the town is mandating what businesses charge for items,” said Knapp.

Long mentioned that while the State Statute on fracking and the forestry measure prohibit conflicting ordinances, there was language specifically in the state’s plastic bag statutes permitting towns to have their own, more strict ordinances. Newtown’s ordinance was more strict than the state’s banning the distribution of bags up to 12 mills, as opposed to a 4 mills guideline in the State Statute.

He said the statute also required businesses to charge for paper bags, which are sources of pollutants.

“They went out of their way to allow town ordinances,” said Long, who joined the dissenting side on repealing the ordinance.

Earlier in the week, Newtown’s Democratic and Republican Town Committees both issued positions on the proposed repeals.

On Monday The Newtown Bee received correspondence from the Newtown Democratic Town Committee, which stated: “The Newtown Democratic Town Committee believes that our environment is an important resource to be protected and is opposed to the repeal of the ordinance. In 2019, after a year and a half of research and public discussion, Newtown adopted an ordinance that encourages the use of reusable bags and thereby protects the environment. There was bipartisan support for the ordinance at the time, and it has been accepted by the community for three and a half years. We see no reason to repeal this ordinance.”

The statement was drafted and adopted by the Newtown DTC at its last meeting, January 12, according to Clinton DePaolo, vice chair of the committee.

“The Newtown RTC Board has been made aware of misleading information about the proposals to potentially repeal the local plastic bag and fracking waste ordinances; to be clear, if repealed both the use of single use plastic bags and fracking waste products will still be prohibited in Newtown and statewide under Connecticut laws. These state laws did not exist when Newtown passed these ordinances; however, since that time the relevant statutes have been fully implemented.

“The statute on Fracking Waste expressly preempts any local ordinance on the subject.

“The key difference between the Plastic Bag Ordinance and the State Statute is that the local ordinance mandates stores charge ten cents for a paper bag, a major source of disagreement when the ordinance was passed. Some stores decided to charge ten cents in all towns where they operate, which shows that retailers do not need Bag Enforcement Officials and ordinances to institute policies for paper bags, and have chosen to do so voluntarily, without an unnecessary government mandate.

“Proponents of the paper bag price mandate believe it is required to change consumer behavior, but we believe that discerning consumers can make their own decisions as to where they shop. As one Democratic Council member acknowledged, everyone knows what stores do and do not follow the ordinance. Absent enforcement, this ordinance is purely symbolic.

“The NRTC Board members believe our goal is to do what is best for Newtown, to support a flourishing economy and to keep the scope of government limited in scope and efficient.”

Associate Editor Jim Taylor can be reached at jim@thebee.com.

Interested residents — many opposing measures on the agenda — packed a January 18 public hearing on the Legislative Council’s proposals to repeal ordinances on fracking waste, plastic bags, and Board of Education elections. —Bee Photo, Taylor