Davos 2023: Who said what on climate and environment? 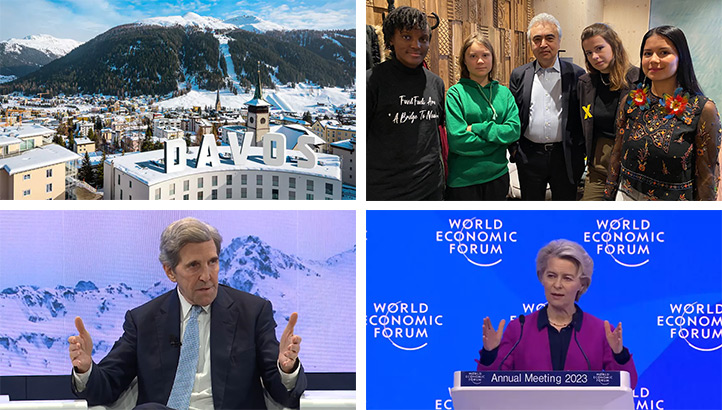 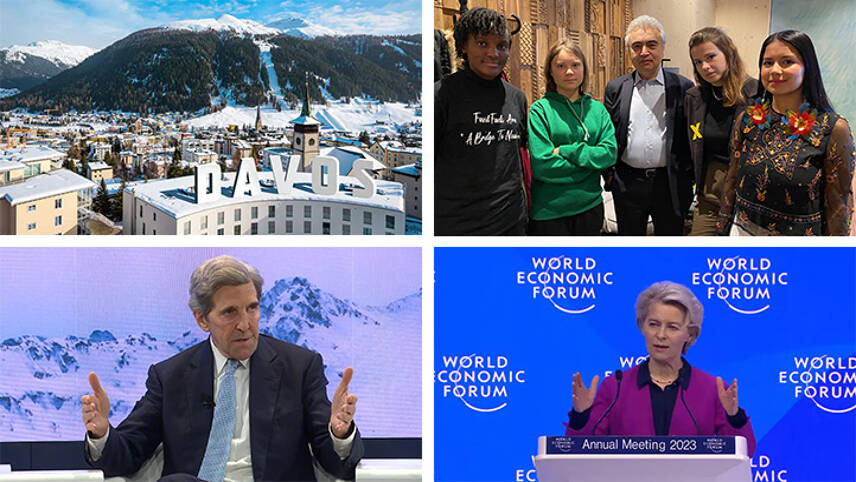 We round up headline quotes from key Davos speeches from climate activists, world leaders and academics

Proceedings in Davos got underway for another year on Monday (16 January) and will be closing this weekend. In total, more than 2,700 people registered to attend the summit, which usually sets the tone for discussions on the world’s most pressing challenges for the year ahead. World leaders were joined by ministers, investors, business leaders, tech billionaires, academics, risk specialists and others. There was also a strong activist presence, with climate campaigners seeking to hold the elite to account over their private jet use and continued support for the fossil fuel industry.

The tone this year has undeniably been more somber – this has been plain to see even for those of us observing from a distance through news articles, social media posts and videos. Leaders have been meeting amid what has been described as a ‘polycrisis’ or ‘permacrisis’, with much attention directed to short-term solutions to issues such as the rising cost of living. Some leaders have chosen to skip out, citing the need to focus on this, including those leading six of the G7 nations.

Nonetheless, several of the speakers on the ground in Davos have dedicated their time to ensuring that climate and the environment remains high on the agenda. The WEF’s own risk analysis for this year concluded that, while the cost of living is the biggest risk for the next two years, it is closely followed by extreme weather events made more likely and severe by the climate crisis. And, as we look out to the eight years beyond that, environmental risks top the list.

Here, we provide a handy run-down of who said what in regards to the climate crisis, the clean energy transition and other environmental topics.

We begin with Antonio Guterres, Secretary-General of the UN, who delivered yet another rousing speech slamming the fossil fuel industry:

“The commitment to limit global temperature rise to 1.5C is nearly going up in smoke.  Without further action, we are headed to a 2.8C increase. The consequences, as we all know, would be devastating.  Several parts of our planet would be uninhabitable. And for many, it would mean a death sentence.

“But this is not a surprise.  The science has been clear for decades. And I am not talking only about UN scientists. I am talking even about fossil fuel scientists.

“Today, fossil fuel producers and their enablers are still racing to expand production, knowing full well that this business model is inconsistent with human survival.  Now, this insanity belongs in science-fiction, yet we know the ecosystem meltdown is cold, hard scientific fact. Add to this toxic brew yet another combustible factor – conflict, violence, war.”

“The battle to keep the 1.5C limit alive will be won or lost in this decade.

“So, we need to act together to close the emissions gap, and that means to phase out progressively coal and supercharge the renewable revolution, to end the addiction to fossil fuels, and to stop our self-defeating war on nature.

“On the other hand, the developed world must finally deliver on its $100bn climate finance commitment to support developing countries. Adaptation finance must be doubled, as it was promised in Sharm El-Sheikh. And the biggest emitters – namely the G20 countries – must unite around a Climate Solidarity Pact in which they make extra efforts in the 2020s to keep the 1.5-degree limit alive.

“Because, if they don’t, we will not be able to reduce emissions at the level that is necessary to keep the 1.5C goal – I would say to keep the 2C goal alive.

“But our climate goals need the full engagement of the private sector. The truth is that more and more businesses are making net-zero commitments. But benchmarks and criteria are often dubious or murky. This can mislead consumers, investors and regulators with false narratives – and it feeds a culture of climate misinformation and confusion, and leaves the door open to greenwashing.

“That is why we created an Expert Group on Net-Zero Emissions Commitments. Recently the group has issued a how-to guide for credible, accountable net-zero pledges. Here at Davos, I call on all corporate leaders to act based on these guidelines.”

“They have proven time and time again that they are not prioritizing that. They are prioritizing self-greed, corporate greed and short-term economic profits above people and above planet.

“The net-zero transformation is already causing huge industrial, economic and geopolitical shifts – by far the quickest and the most pronounced in our lifetime. It is changing the nature of work and the shape of our industry. But we are on the brink of something far greater. Just think: in less than three decades we want to reach net-zero. But the road to net-zero means developing and using a whole range of new clean technologies across our economy: in transport, buildings, manufacturing, energy. The next decades will see the greatest industrial transformation of our times – maybe of any times. And those who develop and manufacture the technology that will be the foundation of tomorrow’s economy will have the greatest competitive edge. The scale of the opportunity is clear for all to see.”

“Ultimately, our goal of achieving carbon neutrality by 2045 has been given an additional boost by Putin’s war. Now we have even more cause to move away from fossil fuels.

“In Germany, we are working urgently on an emergency climate action programme. The first steps have already been taken. We want to almost triple the speed with which we cut emissions by 2030, and generate 80% of our electricity from renewable sources. At the same time, we want to make progress on transforming the transport and heating sectors, and are working to develop a hydrogen economy. We aim to remain an industrialised country whilst becoming climate-neutral.

“The 2020s will be years of change, renewal and rebuilding. We will not walk this path alone. With the EU’s “Fit for 55” package, the European Union seeks to ensure that the course is set for climate neutrality by 2050 in Europe, too.

“Energy and climate policy are areas that exemplify how Putin’s war has made it all the more urgent for us to act, but it is by no means the sole event that has caused this watershed.”

“Are we doing enough to fight inequality and social injustice, and to prevent further autocratic leaders like Putin from emerging? And, what is equally important, are we doing everything in our hands to tackle climate change, or are we using this crisis as an excuse to slow down the green transition?

“Our present struggle is not only against Putin or the energy shortage. It is also against fear, mistrust, selfishness, xenophobia, and environmental disaster. And its outcome will define life in the West and beyond for decades to come.”

John Kerry, special envoy on climate to the US:

“I’m convinced we will get to a low-carbon, no-carbon economy — we’re going to get there because we have to.

“I am not convinced we’re going to get there in time to do what the scientists said, which is avoid the worst consequences of the crisis. And those worst consequences are going to affect millions of people all around the world, [in] Africa and other places. Of the 20 most affected countries in the world from [the] climate crisis, 17 are in Africa.

Al Gore, former Vice President of the US (Clinton administration):

“We have the technologies we need. The International Energy Agency says, for a 50% reduction [in energy-related emissions], we have all we need with proven deployment models already available for us. The next 50%, after 2030, we have the technologies that are in development. We see the pathway to improve them. We know how to get there.

“Within the WEF this year, I’ve noticed a huge amount of passion and attention being paid by CEOs and other business leaders. It is for real.

“But, as [Guterres] said in his brilliant speech, we are not winning. The crisis is still getting worse, faster than we are deploying the solutions – and we need to make changes, quickly. Emissions are still going up… We have to have a sense of urgency much greater than we have yet had.”

“We’re living in a world right now where what’s scientifically necessary, and what is politically expedient don’t match. It feels like we’re heading towards a much slower and more disorderly climate transition in reality.

“Solving climate change is the ultimate team sport. It isn’t just coming from one sector. It has to be governments, it has to be business, it has to be the finance sector to work together to really address these complex and systemic issues.”

“We are taking colossal risks with the future of civilization on Earth, we are degrading the life support systems that we all depend on, we are actually pushing the entire Earth system to a point of destabilization, pushing Earth outside of the state that has supported civilization since we left the last Ice Age 10,000 years ago,”

Joyeeta Gupta, Professor of Environment and Development in the Global South, University of Amsterdam:

“We need to get energy from clean carbon-free form energy sources and to do that, the magic word is investment.

“The global figure of philanthropic capital for climate mitigation currently stands under 2% – and that is just not acceptable. But this is also a massive opportunity to leverage philanthropic giving for climate action.

“Philanthropies can play a unique role in encouraging urgent, radical and unprecedented collaboration between the public and private sectors. It’s only by working together at scale that we can unlock the investment required to achieve our ambitious climate goals and protect the planet.”

© Faversham House Ltd 2023 edie news articles may be copied or forwarded for individual use only. No other reproduction or distribution is permitted without prior written consent.