A ‘National Hydrogen Mission’ was first conceptualised in the Union Budget of 2021. Later in the Independence Day speech, the Hon’ble Prime Minister formally announced the launch of National Hydrogen Mission. Following which the Ministry of Power on 17 February 2022 issued a Green Hydrogen Policy. Please refer our earlier Ergo Update on the Green Hydrogen Policy here. On 13 January 2023, the Government of India released the details of the National Green Hydrogen Mission (Mission) wherein it has been set out that the Government will commit INR 19,744 crore to make India global hub for production, utilisation and export of green hydrogen and its derivatives. The Ministry of New and Renewable Energy (MNRE) has been assigned the responsibility for overall coordination and implementation of the Mission.

Breakdown of the financial outlay 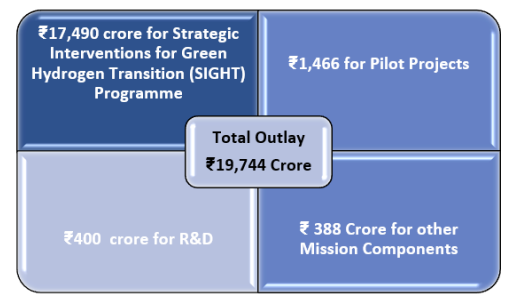 Aware of the nascency of the green hydrogen sector, the Government has adopted a phased approach for addressing the major thrust areas for creation of a robust green hydrogen ecosystem. The focus areas of the two phases envisaged is as follows:

Given that the success of green hydrogen would depend on the integration of other sectors, the Mission provides for an integrated strategy with various ministries agencies and institutions of the Central and the State Government working in tandem for the success of the Mission. The MNRE would be the primary ministry responsible for the overall coordination and implementation of the Mission.

Since electricity would be one of the key inputs for a green hydrogen project, Ministry of Power, (which had earlier issued the Green Hydrogen Policy), would be responsible to implement policies and regulation for delivery of renewable energy to green hydrogen production projects and for development of power system infrastructure. Further, ministries dealing with petroleum and natural gas, steel, roads, etc would facilitate uptake of green hydrogen in respective sectors. An Empowered Group comprising representatives from different ministries and industry experts is proposed to be set up for overall implementation of Mission objectives.

Principal Components of the Mission

The development of green hydrogen across the globe is in its incipient state. Cognizant of this, the Government in the Mission has identified various component which it would be addressing for creation of strong foundation for promoting India as a global hub of green hydrogen and evincing investor interest. The Mission would be focusing its strategy and intervention on the following components: 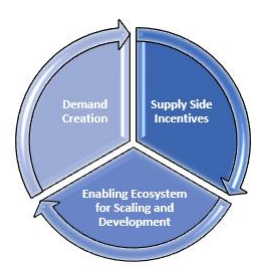 Recognising that the success of any large-scale mission with huge capital outlay would hinge on an enabling policy and regulatory framework, the Mission provides a comprehensive mechanism on how Government would be providing impetus to each such component. For example, financial incentives for electrolyser manufacturing and green hydrogen production are envisaged for creation of supply side push.

Realising that availability of finance for the new sector where performance standards are yet to be established would be a challenge, the Mission bats for exploring various policy measures and initiatives for accessing lowcost funds through international green finance, green bonds and other innovative financial mechanisms. Similar to the renewable project, the Mission proposes competitive bidding for procurement of green hydrogen and its derivatives, and MNRE is entrusted with the responsibility of framing the guidelines for transparent competitive bidding process. Awarding of long-term contracts for procurement of green hydrogen, post competitive bidding would provide stability to producers and will also incentivise lender for financing the hydrogen projects.

To address the logistical and supply chain risks associated with green hydrogen, the Mission provides for creation and promotion of hydrogen hubs which are regions with a capability of creation of cluster-based production and utilisation model to enhance the viability of green hydrogen projects. Under the Mission, the Government plans to set up 2 such hubs in the initial phase.

In order to create bulk demand and scale up production of green hydrogen, the Mission empowers the Government to specify minimum share of consumption of green hydrogen or its derivative products (green ammonia, green methanol etc) as energy or feedstock for different consumers. The Government would lay down a year wise trajectory for such minimum share of consumption similar to a renewable purchase obligation (also referred to as RPO) in the renewable energy industry. The Mission moots for creation of legal provision for ensuring enforceability of consumption targets for industry to use green hydrogen and its derivatives through the Energy Conservation Act, 2001. It is pertinent to mention that the parliament had recently passed the Energy Conservation (Amendment) Bill, 2022, which had mandated certain industries to meet their proportion of energy needs from non-fossil sources. Creation of legal mandate to certain industry for mandatory consumption of green hydrogen, akin to the present renewable purchase obligation will provide stimuli to green hydrogen production units.

The roll out of the Mission is a step in the right direction which would provide impetus to the India’s goal of becoming energy independent by 2047 and to achieve net zero emission by 2070. India’s energy consumption has been rapidly increasing and its is estimated to grow by another 25% by 2030.

India consumes around 5 MMT of hydrogen annually, which is currently sourced primarily from fossil fuel (Grey Hydrogen). Grey Hydrogen is much cheaper compared to its green counterpart. However, green hydrogen has a bright future, as an enabler of renewable energy systems and its ability to decarbonise end users to its potential use to fuel combustion engines. It is expected that green hydrogen will be competitive with Grey Hydrogen in the coming years.

The content of this document does not necessarily reflect the views / position of Khaitan & Co but remain solely those of the author(s). For any further queries or follow up please contact Khaitan & Co at [email protected].

2023-01-20
Previous Post: The GTV of KSA Fintech Market is expected to reach USD ~100 bn by 2027F owing to major government initiatives and technology adoption: Ken Research
Next Post: A major environmental summit urges focus on the challenge of climate change in Southwest Florida