Remarks of Ambassador Mustafa at “Rule of Law and the Business Environment in Bulgaria” Conference, January 20, 2023 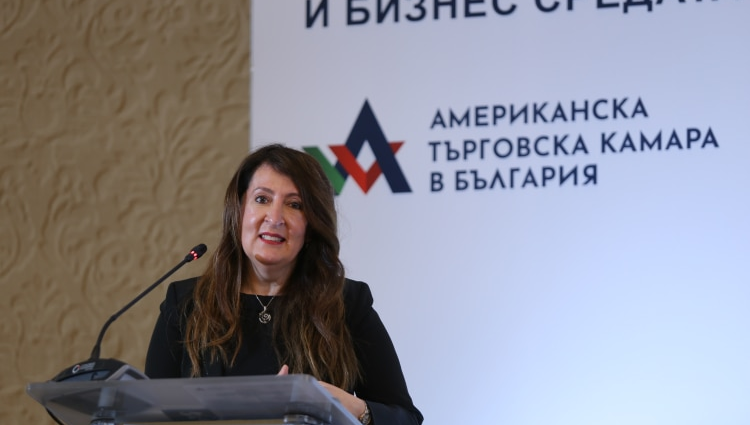 “Rule of Law and the Business Environment in Bulgaria” Conference

I am honored to have you here to share this stage today.

I would like to start by thanking the American Chamber for organizing today’s event and I would like you all just to take a minute to absorb what you’re seeing today. Which is a gathering of the British, French, German, Swiss, Greek, Swedish, Italian business organizations. The fact that you have all of us here – this hasn’t happened before – to come together to talk about rule of law. Just take a minute to absorb that. In addition to having these entities, we are here with our partners, the Bulgarian organizations, who are also very involved in fighting for this issue – we are here with the members of the NGO community, we are here with members of the business community and other diplomats. I want to say thank you for continuing to make this issue a priority.

Rule of law, as you have already heard, remains one of the most important challenges here today. We all know that. That’s why we are here. When we speak of rule of law, I think of it as the principle that all people and institutions are accountable to the laws. This is a topic very close to my heart. And as I close out my three and a half years here in Bulgaria and I look back, I think first about all these successes that Bulgaria has had in this period. With the COVID-19 crisis, the fact that you successfully emerged from that pandemic, you started the OECD accession process, put relations with North Macedonia on a constructive path, and some things that, honestly, I thought once impossible, with diversifying away from Russian energy, have happened with remarkable speed. So, as we, the United States, mark our 120th anniversary this year with Bulgaria, I leave proud with the fact that our relations have never been stronger. And I am confident that Bulgaria is better positioned today for long-term success than it ever has been.

The one area, however, where I regret we have not seen as much progress is in the area of rule of law. And I say that with full honesty. The fact that we are all gathered today is a success, but for those of us who care so much about this issue, with our partners, we need to do more. Now, it is not for a lack of effort both on the part of the Bulgarian people, Bulgaria’s international partners, but we have seen firsthand just how incredibly hard it is to reform institutions and to root out deeply entrenched interests. You heard from Olivier, who said that one of my priorities is corruption, and before coming to Bulgaria in all of my introductory meetings, many Bulgarian officials said to me: “Don’t use that C-word. Don’t use that C-word – corruption, it is a non-starter.” It will ruin my relationship with the government. It will set me up for failure. However, I would speak to Bulgarians and to institutions and the first thing they would say that is a top concern for them is corruption. Businesses, civil society, journalists, average people would say: “Corruption is an issue that we are having difficulty dealing with.”

So, of course, I had to make this a priority for me. And it is a priority for the Biden administration. Now, some of you might ask – why do I care so much? Because I do personally care. Why do I care so much? I care because true friends, true partners, true allies, work together to build each other up. And when Bulgaria is strong, we are strong. And true partners speak honestly with one another. So, I am here to say: I am a true friend of Bulgaria. And I always will be. So, if you allow me to speak honestly with you today about some of the issues that I continue to care about. Those of you in the business community, you know how high the stakes are. We have heard, and I know the other chambers have heard from so many investors, that see tremendous potential here in Bulgaria, but they fear that their rights will not be upheld if they are ever in a legal dispute. We hear stories about businesses that are targeted by powerful individuals. They use the institutions to harass, to intimidate, to extort opponents. We hear of suitcase lawyers, backroom deals, kickbacks. We hear of untransparent procurement practices, tailored tenders, specifications, and favoritism in government contracts. We hear that from our companies, so we know this firsthand. In Bulgaria we have seen that corruption has fundamentally distorted how some institutions function and who controls them and that is to the detriment of the Bulgarian people. And we understand that tackling corruption is a long-term project. It is not easy. No country, not even my own, not even the United States is immune from corruption. Constant vigilance is required to combat it.

Now, our national security advisor Jake Sullivan summed-up our anticorruption strategy as fundamentally boiling down to two lines of efforts: first, helping the good guys; and second, going after the bad guys.

In terms of helping the good guys, there is plenty to support in Bulgaria and we have done this along with our American partners. I know so many of the other Chambers have done this. And that means increasing our training and assistance to judicial and law-enforcement officials. And even just over the past three years, our justice resident legal advisor has delivered over fifty capacity building programs in Bulgaria. They trained over 1,000 prosecutors, investigators, judges, legal professionals. They send Bulgarian experts to the United States on professional exchange programs. We brought in new international and American NGOs to work on anticorruption issues at the national level, at the municipal level. And we are helping to build the capacity of local civil society working on these issues through USAID grants, training, technical assistance. And that is all in addition to the wonderful work that the America for Bulgaria Foundation has been doing on this issue.

We also support the work of investigative journalists, and I am proud to say that it was a Bulgarian journalist who won the State Department’s prestigious Anti-corruption Champions award in 2021. We bring up the rule of law in almost every single meeting that we have with Bulgarian officials, and we are constantly looking for allies at all levels of the government. And again, I want to be clear. We believe that the overwhelming majority of Bulgarian law-enforcement officials, prosecutors, investigators, judges, members of Parliament, public officials, they are good, honest people, who are drawn to public service just like we are – out of a genuine desire to help out. And the challenge, unfortunately, is a small minority has created a system that enriches an oligarchic class and captures state resources. I know that personally as I work with our businesses to try to counter this. And what happens for those who don’t have that assistance – it creates a sense of hopelessness. And it discourages those who want to fight for their country. Truly, it pains me to see that.

We hear often from members from the judiciary and law enforcement communities who make valiant efforts to investigate and prosecute corruption, only to have those investigations closed, transferred to other offices, or delayed indefinitely when they come too close to certain red lines. These public servants are denied promotions, they are transferred to far-away towns, and they are dismissed. I am not telling you anything you don’t know. I am just speaking the truth as your friend so that we all focus on this.

Let me give you an example. In just the past few weeks, corruption investigations in Varna and Shumen were closed or transferred without publication of a legal basis. Did you know that? It is just an example of the past few weeks. We see cases languish in pre-trial proceedings or trial for years, and some never even reach that stage. So, this is why we move to the second line of effort, which is going after the bad guys as we say. And to bring lasting change, we need to increase the cost of corruption.

We have taken some steps as the U.S. government to make it harder for corrupt actors to exploit the U.S. financial systems to advance corruption, and to seize the proceeds of their crimes. For those of you, most of you already know this, but during our tenure here, we designated three Bulgarians under the Global Magnitsky program and we restricted the visas of six Bulgarians, all for corruption.

While we will continue to use whatever tools we have as your partner to serve as a catalyst, we all know that change must come from within. Bulgarian politicians showing courage, in the words of the Justice Minister, having the will, the citizens are demanding accountability from their government. Again, this is why events like today are so important. The business community in Bulgaria has tremendous influence encouraging public discussion, in shaping policy, and suggesting actionable reforms to improve the business climate. We need a united effort, all of us, coming together.

You know I am an optimist – the American way, the American optimism. Again, as I look back on my three and a half years here, I remain hopeful because the fact that we are gathered, which even two years ago would have been a taboo, means there is some progress. The Bulgarian people have said: “We need to tackle this issue! Parliament has it before it now – judicial reform legislation, related to the European Recovery and Resilience Plan. And this legislation, I am sure my European colleagues will address this as well, it responds to concrete recommendations from European institutions. I think it is time to show a little bit of political will to pass this legislation. Of course, when you pass it, it has to be implemented and not just implemented selectively, but fully. And that includes the reforms that the Europeans have suggested for the office of the Prosecutor General. I think it is time to tackle these reforms. I believe in the coming years we will see forward momentum in improving procurement practices, creating a robust investment screening mechanism and strengthening the intellectual property rights protections. And I am optimistic that steps will be taken to decrease impunity for those who abuse the resources of the state.

I encourage you all to continue advocating for these and other reforms, to hold your leaders to high standards just like we try to do it in the United States. And to demand from them courage and commitment.

I believe your collective efforts will continue to lead Bulgaria in a better direction. And again, I am proud to be your partner and your friend in all of this.

I wish you continued success in your endeavors, and I look forward to working with you in my remaining small time left here.