Some plastics should just be binned in Singapore: Getting recycling right with a veteran advocate | News | Eco-Business

“Is it really all about straws, and is replacing plastic with something else the right solution for Singapore? Singapore has virtually no plastic marine pollution,” she added.

Rheaume hails from Canada and has lived in Singapore for about 30 years. She runs a local Facebook group ‘Journey to Zero Waste Life in Singapore’, a repository of crowdsourced waste management tips.

Last November, she launched a new website, ‘Recyclopedia’, to store all the knowledge on waste and the circular economy in Singapore, along with the latest donation drives for secondhand items. The team is currently looking for someone to help with marketing.

Rheaume is fixated on getting the facts right. Like how the glass her tea came in is likely heat-treated, and probably not recyclable. She remembers that Pulau Semakau, Singapore’s offshore landfill, was originally supposed to be operational till 2030, then 2045 – authorities attribute it to better recycling – before the current warning that it could be full by 2035.

Ahead of Chinese New Year, Eco-Business chats with Rheaume to hear about her new website, views on waste management, and tips on how to celebrate sustainably over the festive period.

What’s the idea behind Recyclopedia? 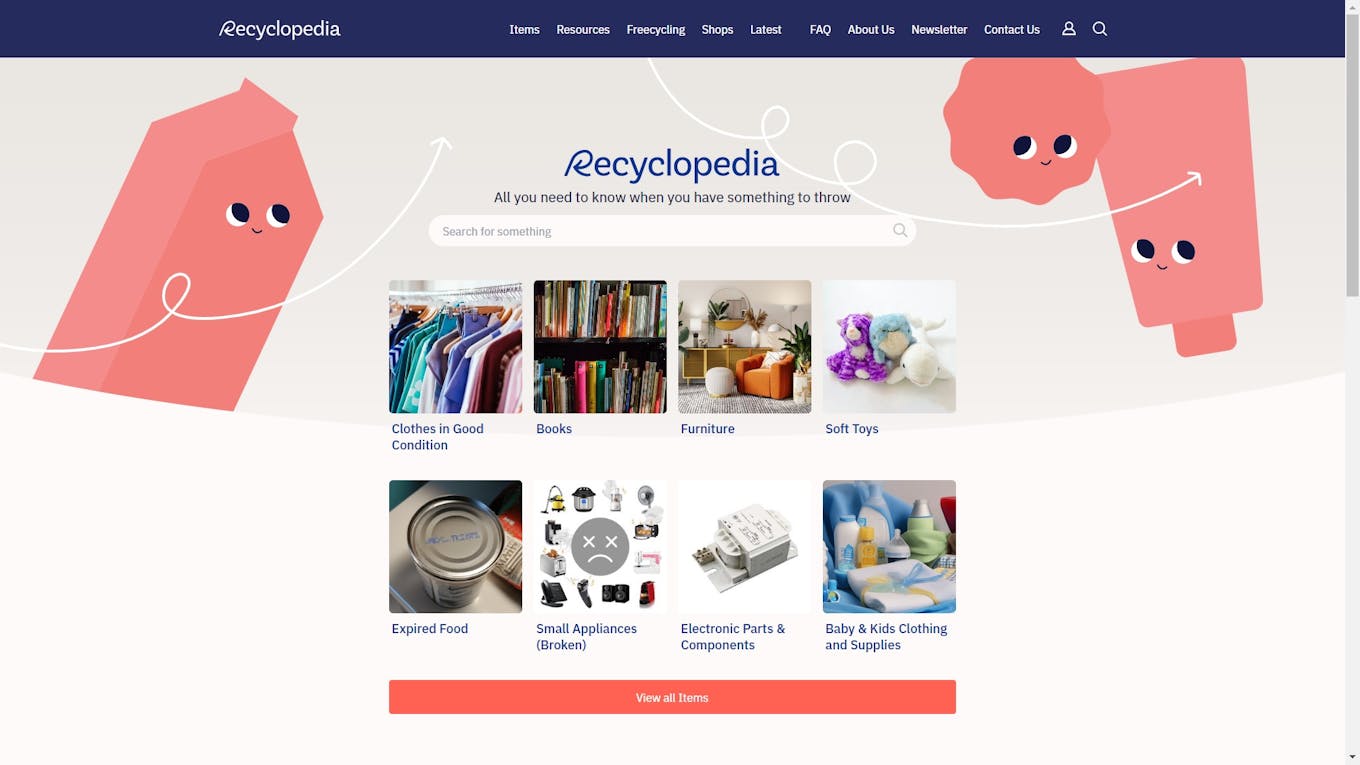 The Recyclopedia website, created by Robin Rheaume with two other volunteers last November.

In our Facebook community, a lot of the same questions come up again and again, but you just can’t find those answers easily. I wanted to create something that was much more intuitive. I initially wanted to make a mobile application but people talked me out of it, because there are just too many apps out there.

I want to make it so that, when people ask “what do I do with this thing”, they can find the answer on Recyclopedia. For example, glass that is heat-treated, it’s called borosilicate glass, and you can’t recycle it. It gets really complicated. The average person will just chuck it in the blue recycling bins and not care, but sometimes people want to know.

It isn’t just recycling tips on Recyclopedia right? There are lots of posts on freecycling, second-hand selling and repairs too.

Exactly. It is really for people who have questions like, “I have headphones, what can I do with them?”

Especially around Chinese New Year, people just take all their stuff and drop it at the Salvation Army. It is not the best thing to do. You should go to smaller organisations that could benefit from closer contact with beneficiaries, that aren’t overwhelmed.

I don’t expect to change most people’s actions – most people don’t care. But for those who do, they might actually be surprised to know that it is a bad choice. Recyclopedia will tell you all the different ways you can wash your clothes better, where you can take them, where you can repair things.

What sort of traction has the site gained?

The website is only up for two months, I don’t really have a feel for how well known it is. We have some people, for example from a recycling business, asking about advertising. But I would say few people know about the site.

What we can see already is why people come to us, what they are searching for. Number one is clothes. Another one is what people should do with their Thirsty Hippo disposable dehumidifiers. Can we recycle them? Sorry, you can’t.

What are some bad waste habits people have in Singapore that really gets to you?

The problem, which is not unique to Singapore, is consumption. We are constantly buying stuff, and the knock-on effect is that people throw out stuff that is perfectly good. If you speak to people in the dumpster diving community, even if they’ve been in it for years, their mind is still blown by how much nice stuff is thrown out.

I live in a fairly large condominium estate, and when I need something, like a piece of luggage for a trip, I just need to go downstairs and I will find one.

But I don’t know how to tackle the consumption problem, especially now that people don’t go out as much and they are looking for dopamine hits. They can spend five seconds getting a dopamine hit buying something on Shopee and spend the next 20 years living with the carbon that is produced.

You wrote about Canberra Hawker Centre mandating biodegradable takeaway boxes. We know that these still go to the incinerators in Singapore, but do you see this reflecting perhaps a larger problem in Singapore that people do not know the best way to minimise waste?

When you see a hawker centre making that choice, you realise that this misunderstanding runs quite deep. If it is just someone who is making a personal consumption decision based on something they see on Instagram, I get that, they are misinformed. But if you are forcing everybody in your hawker centre to use these materials and you haven’t done deep research… I just don’t get it.

I never really see much of an effort to do life-cycle analyses on these materials.

There are some initiatives in Singapore to develop facilities that can process biodegradable plastics. These could help?

We need to do a life-cycle analysis. There is always going to be a period where such activities are not economically feasible, before becoming so.

Let’s be honest about plastics, before we talk about biodegradable plastics. For the most part, plastics are not recyclable, that has been proven over and over again.

When we talk about recycling rates in Singapore, the idea of getting from 20 to 30 per cent domestic recycling – it just seems like a random number plucked out of the air, because it doesn’t make sense without looking at the different types of materials.

The problem is mainly in sorting plastic waste. Virtually all food waste that goes into the recycling system shows up on plastic. Apart from the issue of contamination by food, which makes plastics unrecyclable, there is an issue with material purity. If I have HDPE (high-density polyethylene), which is what shampoo and milk bottles are made of and is valuable for recycling, but mixed with 5 per cent polypropylene, which is also recyclable, you have a mix of different types of plastics, which are hard to recycle and considered to be contaminated.

If you invested in the latest sorting technology, with optical sorters that can identify colours and types of plastic, you can increase the purity levels of the plastics, and you probably would have more buyers for the recycled materials. But it isn’t economically feasible to make such investments, because recycled plastics don’t fetch high prices.

It is possible that on a carbon-cost basis, it might be better to throw waste into the incinerator and recapture the energy, rather than to recycle it. We have to look at the life-cycle numbers.

So it is about the carbon emissions?

Yes, because we don’t have a marine plastic problem in Singapore. If you see plastics on the beaches, it has come from Indonesia. Singapore should be focusing on climate change. In recycling, you need to spend energy trucking the waste to material recovery facilities, and then you need to spend energy sorting it. The final product probably is not very pure and would not fetch a good price. If there is contamination, the plastics get on another truck to the incinerator.

Think of all the carbon involved in getting to this process where you saved this tiny little bit of plastic. Did that really make sense? I don’t think it does.

It is always true that reducing waste is important, but what I am talking about here is a system, right? I find it difficult to say that we need to put the waste problem on individuals when the system is broken. I am ready to sit down with anybody for them to convince me why we should be trying to recycle plastic in Singapore.

The way I try to deal with that broken system is only recycle HDPE and PET (polyethylene terephthalate – commonly used for bottles) and all other plastic waste I throw out.

My recommendation for all food plastic packaging is to just throw it out. Don’t bother washing it, it is not worth the soap and water. If it is clean, then sure, throw it into the blue bin. It can also be reused. 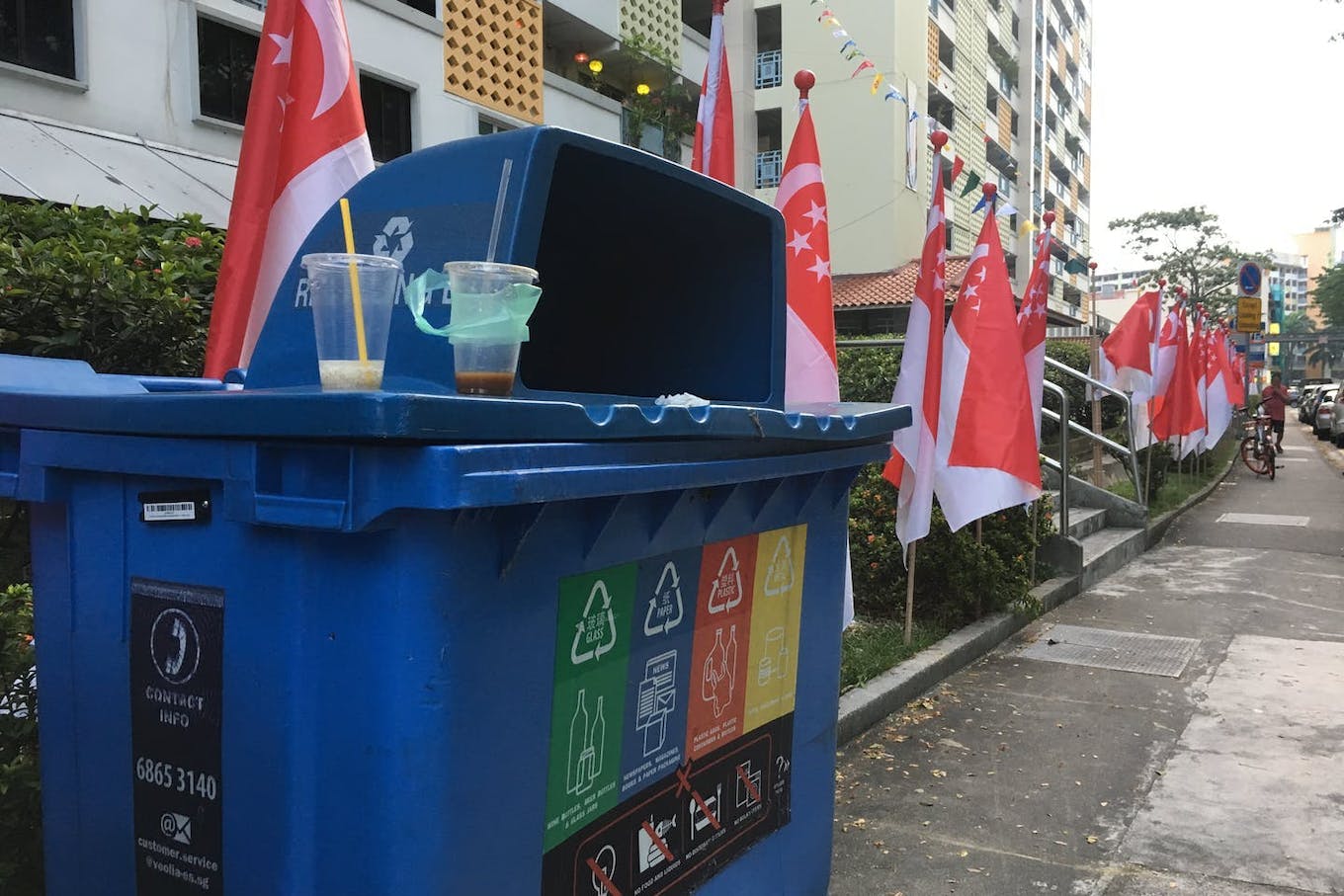 One of the many blue recycling bins in Singapore. Unwashed plastic cups cannot be tossed in as the contents can contaminate the entire bin. Image: Eco-Business/ Robin Hicks

I just want to talk about Pulau Semakau (Singapore’s offshore landfill) for a second. There are myths worth shedding light on. For example, it is said that plastics are making Semakau fill up too fast. Plastics are hydrocarbons, so they burn as well as natural gas. When you burn a PET bottle, you are going to end up with virtually nothing. What Semakau is filling up with is glass, stone and metals, not plastic.

I can understand if you want to get people to recycle and waste less, you talk about plastic – because everyone understands plastic. But at Semakau, it is not plastic that is the problem.

You’ve been in Singapore for about 30 years. Have things improved?

I have to say, when Alba came in to handle e-waste (around 2019), I thought that was awesome. I really like the public education that they do through social media, I think they do it better than the other entities out there, which are pretty quiet.

So in some ways, things have got better, in some ways they are already really good. People don’t appreciate how good the waste management system is in keeping Singapore clean.

I think an incineration system makes a lot of sense. I haven’t done enough research to know what is better for the environment – incineration or pure landfill – in terms of carbon emissions. But I mean, we don’t have a choice, Singapore is a small place.

The NEA (National Environment Agency) and MSE (Ministry of Sustainability and the Environment) are trying to work more with communities – they are doing public consultations on issues like the beverage container deposit scheme.

I think things are already pretty good to start with. The fact that I can see all these areas for improvement doesn’t mean things aren’t good.

Before we end, are there any more important things people should keep in mind during Chinese New Year?

Number one, do not dump your stuff on the Salvation Army. If you are doing spring cleaning, keep your things stored and send them out at other times of the year when it is quieter.

Use the various recycling bins for your red packets. DBS and POSB banks have bins that are open year-round. If you’re not sure where to go, search it up on Recyclopedia.

The other big one, which is culturally hard to deal with, is food waste. There is this idea of abundance (during Chinese New Year), and then you have more food than you could possibly eat. So, to the extent that people can manage their food waste by eating leftovers or controlling portions, do that.

This interview has been edited for clarity and brevity.