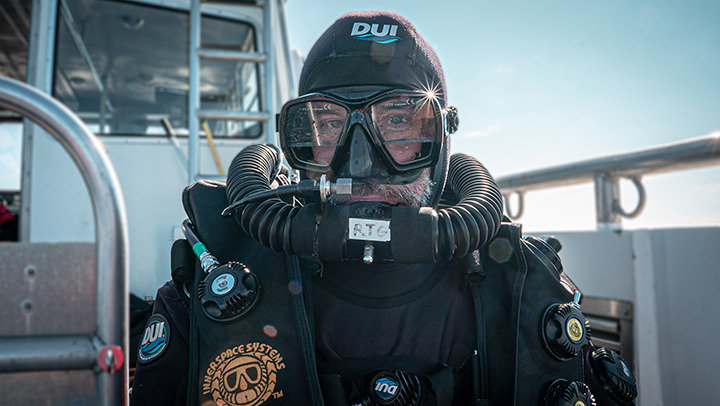 Courtesy Photo by NOAA/NickZachar
This is from the Great Lakes film, “Stories from the Blue: Educators at Sea.” Russ Green, superintendent of the newly-designated Wisconsin Shipwreck Coast National Marine Sanctuary, prepares for a dive in Lake Michigan.

ALPENA — Leave your scuba gear at home, but get ready to immerse yourself in educational entertainment.

With nearly 100 films ranging in length from two minutes to 92 minutes long, the festival brings the ocean to Northeast Michigan, as well as many Great Lakes-themed features.

Filmmakers are excited to be back in person at the Great Lakes Maritime Heritage Center for the first time since 2020.

“I am really looking forward to attending it,” Filmmaker Alex Rose said in a phone interview. “It’ll be really nice to actually go, and watch everybody’s films, and be there, and talk to people.”

Courtesy Photo “INTO THE BLUE: The Wonders of the Coral Triangle” will be showing at 1 p.m. Sunday at Great Lakes Maritime Heritage Center in Alpena.

She had a film in last year’s virtual festival, and will present a new one this year.

“We have one in this festival, but it is the second one in a series that we’re working on,” said Rose, who is based out of Chicago. “I did this film with my friend and colleague, Jennifer Idol … We started this series called ‘Protected Waters.’ And it’s all about exploring different parts of the United States that fall under some kind of legal protection.”

“We went scuba diving in Yellowstone Lake, which is not a thing that a lot of people go and do,” Rose said. “Everybody knows Yellowstone, but usually they don’t go check it out underwater.”

In their second film, they explore Laguna Madre, the eastern part of the Gulf of Texas.

“It’s the largest hypersaline lagoon in North America,” she explained. “Basically, it’s this super salty body of water that’s separated from the ocean by this little strip of land, which is Padre Island. So, it is a huge overwintering area for birds, it’s a major area for sea turtles to come feed because it’s all seagrasses, so it really is a major area in that part of the country that provides food and shelter for a lot of the animals over the wintertime.”

“Protected Waters: Exploring Laguna Madre,” will be showing at the GLMHC in Alpena.

“We’ve got footage of birds and sea turtles and cool stuff underwater, so I think there’s something in it for everybody,” Rose added.

She said in the U.S., we are very focused on protecting our land, but that water needs to be protected to safeguard the future as well.

“We’re frequently not as focused on protecting our waterways, even though they are very much the lifeblood of everything that happens on land and underwater,” Rose said. “Which is why we like to focus below the surface as often as possible. It’s not something we see as often, so it needs a bit more attention.”

They have plans for a freshwater streams film for next year, “looking into creeks and streams and rivers, our small freshwater resources that are very locally important, and looking at how they’re all connected.”

Filmmaker Nick Zachar is bringing more films to the TBIFF this year. He’s a filmmaker for the National Oceanic and Atmospheric Administration’s Office of National Marine Sanctuaries.

“There are 15 National Marine Sanctuaries now, and two Marine National Monuments, and it’s my job — a pretty cool gig — to go around to these places and film the places, but more importantly, film the people that are dedicating their work and their lives to protecting these special places.”

He explained that he and others on the NOAA team produce weekly “Earth is Blue” videos, many of which will be screened at the TBIFF.

“We just had our 50th anniversary,” he noted. “That kicked off in October of 2022, so we’re celebrating 50 years of National Marine Sanctuaries, so we have a few new films that were created for the 50th anniversary. And then, the most fun ones are ‘Stories from the Blue,’ which is part of our ‘Earth is Blue’ campaign. These are documentaries about the people that are in the sanctuaries, experiencing the sanctuaries, and taking care of the sanctuaries.”

The new film, “Stories from the Blue: Educators at Sea,” will focus on the work educators are doing in the new Wisconsin Shipwreck Coast National Marine Sanctuary.

“This past summer, two educators, sponsored by (NOAA) Sea Grant, came over to Wisconsin and tagged along on a research cruise,” Zachar noted. “We’re excited about premiering that one at the festival … there are a bunch of shipwrecks off the coast there, so maritime heritage, also mixing in some ecology, health of the Great Lakes.”

“They laid the groundwork for the second Great Lakes sanctuary, and there’s also a third one in designation right now in Lake Ontario,” Zachar said. “So the Great Lakes are getting some love, which is awesome.”

Filmmaker Corey Adkins will bring “A.A. Parker: One Ship, Twice Sunk” to the film festival, as well as two other films. Adkins is the content and communications director for the Great Lakes Shipwreck Historical Society.

“They’re all about shipwrecks,” Adkins said of his films. “The A.A. Parker sunk in 1903. This story is about — usually during shipwrecks, there is loss of life — but this is about an amazing rescue by the U.S. Lifesaving Service out of Grand Marais that saved the whole crew and two dogs off the A.A. Parker.”

He said in the film, very skilled divers take a look under the water at that shipwreck site.

“It’s a very unique-looking wreck on the bottom,” Adkins noted. “There are artifacts all over the place on the bottom of Lake Superior.”

The film pays tribute to a diver who died, including some of the footage he took before he tragically passed. His name was Erik Foreman.

“He was an amazing diver, so it’s kind of a tear-jerker,” Adkins said.

Another of Adkins’ films is “Lost in the Site of Salvation: The Wreck of the Atlanta.”

“We discovered the shipwreck Atlanta in 2021,” Adkins said. “It was being towed by another vessel, and the tow line broke, and they were on their own in a bad spring storm in 1891 … six men and one lady got into a life boat … five of the seven people perished in that wreck.”

Underwater ROVs capture more footage on the lake bottom, as well as footage taken by divers.

“So, you get to see something nobody has seen since 1891,” Adkins said. “It’s so cool when you see something that hasn’t been seen in over a century. That’s part of what we do, and we like to share it with the public.”

It’s a story of two barges called the Jupiter and the Saturn.

“They’re shallow wrecks,” Adkins said. “You can basically swim out to one of them, up by Paradise.”

He said those wrecks occurred close to shore, with no survivors.

“Four ships went down that day,” Adkins said. “But this focuses on the Jupiter and the Saturn … We have these folks that never knew what happened to their great-great-grandfather. All they knew was that he was the captain of the Jupiter. So, when we found the Jupiter and we released that, they came out and said, ‘Oh my gosh, now we know.’ … Making that human connection is one of the things we hope to do when we find these wrecks.”

Adkins has received 13 Emmys over the course of his filmmaking career.

He added that the TBIFF is “a great place to learn and be entertained at the same time.”

Producer/Director David J. Ruck will present “The Erie Situation” and several more films at the festival in Alpena.

“‘The Erie Situation’ is the story of what’s happening in western Lake Erie as a result of nutrient loading from agricultural runoff” causing toxic algae blooms on an annual basis, Ruck said. “And the impact that’s having on the environment, and the impact that could be having on human health, and the politics surrounding the action, or namely, inaction in response to addressing this problem.”

He noted that more environmental regulation on giant agricultural firms would not hurt smaller-scale farmers.

“It’s a cautionary tale of what could be happening in more places, more often,” Ruck added. “Especially with the X factor of climate change driving bloom formation … it’s becoming more common and more prevalent around the globe.”

He added that algae blooms have been found in Lake Superior, Saginaw Bay, and parts of Lake Michigan.

“It’s important to note, cyanobacteria, which is what we are talking about, is naturally occurring,” Ruck explained. “Usually you find them in thousands of parts per million, in bodies of water. But if you feed them, if you give them nutrients, and the nutrient levels become imbalanced, then they have food to grow at an unconditional growth rate. They’re not inhibited by anything in the natural environment.”

People and pets can be seriously harmed if they ingest water from a toxic algae bloom.

“If it’s a toxic bloom, and your pet were to drink that water, you’ve got an hour to get your pet to the vet or they die,” Ruck said. “This is kind of what the science is trying to figure out now — how to predict what makes an algae bloom a toxic algae bloom.”

Ruck said water is a valuable and limited resource that needs to be protected.

“A lot of people don’t realize how interconnected we are, throughout the world, to our bodies of water — the ocean, but also the Great Lakes,” Zachar added. “These are amazing resources, and I’ve attended Thunder Bay International Film Festival multiple times. It’s an awesome event, and it’s a great place to go and hear stories about the Great Lakes, the oceans, from amazing up-and-coming filmmakers to established filmmakers. So, go check it out. I guarantee you will learn a lot.”

“It’s just a great event,” Ruck added. “I love attending it. What better thing to do on a weekend in Alpena in the middle of winter?”

For tickets and film information, visit thunderbayfriends.org. An all-inclusive Thunder Pass gets you into all films for $100, which benefits the Friends of Thunder Bay National Marine Sanctuary.

Courtesy Photo by NOAA/NickZachar
This is from the Great Lakes film, “Stories from the Blue: Educators at Sea.” Russ Green, superintendent of the newly-designated Wisconsin Shipwreck Coast National Marine Sanctuary, prepares for a dive in Lake Michigan.

Courtesy Photo “INTO THE BLUE: The Wonders of the Coral Triangle” will be showing at 1 p.m. Sunday at Great Lakes Maritime Heritage Center in Alpena.


Today’s breaking news and more in your inbox