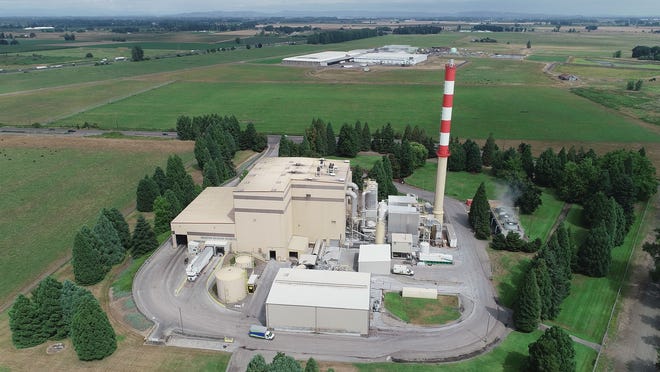 Oregon’s only municipal waste incinerator may soon be subject to more study and stricter regulations.

The 36-year-old burner, located north of Salem in Brooks, previously operated as a partnership between Marion County and New Jersey-based Covanta Holding Corp.

In July 2021, Marion County left the partnership. It now pays Covanta a flat fee to take a set amount of the county’s garbage.

The county’s new contract with Covanta allows the incinerator to burn up to 18,000 tons per year of medical waste, much of it from other states and Canada.

And Covanta no longer must tell the county, or the public, exactly what it is burning.

That has health and environmental groups, as well as some legislators, worried. If the facility were regulated solely on the amount of medical waste it accepts, they point out, it would be subject to the stricter federal pollution limits imposed on medical waste burners.

The U.S. Environmental Protection Agency set those limits because incinerating medical waste, which is mostly plastic, emits harmful air pollutants, including mercury and dioxin, that can affect human health.

But, because Covanta mixes the medical waste with a larger amount of household and business waste, it is regulated as a municipal waste incinerator.

“Covanta is taking advantage of a loophole to make Oregon a dumping ground for the toxic pollution other states don’t want,” Sen. Deb Patterson, D-Salem, said. “For the sake of Oregonians and their families and their health, we need to close that loophole.”

Patterson is sponsoring two bills this session relating to the incinerator.

Senate Bill 488 would require Covanta to meet federal emissions limits for large medical waste incinerators if it accepts medical waste at an annual average rate of more than 500 pounds per hour.

Covanta currently exceeds those limits for hydrogen chloride, sulfur dioxide, carbon monoxide, nitrogen dioxide, cadmium, lead and mercury, according to an analysis of DEQ data by Beyond Toxics, a Eugene-based environmental nonprofit.

Under the bill, also sponsored by Sen. James Manning Jr., D-Eugene, and Rep. Courtney Neron​, D-Wilsonville, Covanta would need to meet federal emissions limits for medium medical waste incinerators if it accepts an annual average of more than 200 but less than 500 pounds per hour.

At the 18,000 tons of medical waste per year it currently can accept, Covanta could average more than 4,000 pounds per hour, or nearly 10 times the federal threshold for a large medical waste incinerator.

SB 494, also sponsored by Neron​, would direct the Oregon Department of Environmental Quality to conduct a long-term study of the cumulative impacts of air contaminants in areas surrounding the incinerator.

Last year, Beyond Toxics funded a study of pollutants in moss near the incinerator. It showed elevated levels of heavy metals from samples taken closest to the facility.

The study was too small to be conclusive, but the results indicated a need for further testing, its authors said.

“Utilizing (the closest) sample as an indicator, there is reason to suspect high levels of heavy metal pollution being introduced into the air in the area nearby to the incinerator,” the report from Vancouver, Washington-based Advantage Environmental states.

At the time, DEQ officials said moss sampling can’t be used to characterize emissions from a particular source.

Covanta officials did not respond to the Statesman Journal’s request for information about the medical waste it burns. Officials previously have said the facility meets all state and federal regulations.

Marion County officials also did not respond to questions.

What is Covanta burning?

Covanta Marion is one of two municipal waste incinerators in the Northwest. The other, in Spokane, Washington, is operated by the city of Spokane.

The Brooks facility is designed to burn about 187,000 tons of waste per year, generating up to 13 megawatts of energy, enough to power about 6,000 homes. Covanta sells the electricity to Portland General Electric.

Some neighbors and environmental groups have long worried about the composition of the materials burned there. They say the state doesn’t require enough testing to ensure neighboring communities, including Brooks, Keizer and northeast Salem, are protected from its air emissions.

In July 2021, a Statesman Journal investigation found that, during a one-year period, Covanta accepted about 6,000 tons of industrial waste from businesses and organizations based in 19 Oregon counties; in California, Washington, Nevada, Utah and Georgia; and in Ontario and British Columbia, Canada.

The Statesman Journal got the information through a public records request for detailed invoices Covanta submitted to Marion County. Covanta has not been required to provide that information to the county since the partnership was dissolved.

The public should eventually learn more about what chemicals are in Covanta’s air emissions, as part of former Gov. Kate Brown’s Cleaner Air Oregon initiative.

Covanta was among the first companies called into the program, which is meant to close a loophole in state law that allowed polluters to emit dangerous levels of toxic chemicals while operating legally.

But the process is moving slower than anticipated.

DEQ officials originally thought Covanta would complete the process by the end of 2021. But they have granted the company four extensions to its November 2020 deadline to submit an emissions inventory, the first step in the process.

DEQ is currently reviewing that inventory, submitted in October 2022.

Tracy Loew covers the environment at the Statesman Journal. Send comments, questions and tips totloew@statesmanjournal.com, 503-399-6779. Follow her on Twitter at@Tracy_Loew

2023-01-23
Previous Post: New Africa Renewable Energy Manufacturing Initiative Will Help Unleash 1.2 Terawatts of Renewable Energy, Create up to 14 Million Jobs, and Increase GDP by Over Six Percent by 2050
Next Post: Aligning Your Philanthropic Operating Model with Your Goals