DETROIT, Jan. 24, 2023 /PRNewswire/ — Comerica Bank and TechTown Detroit announce the return of the Comerica Hatch Detroit Contest by TechTown, which awards $100,000 in startup funds from Comerica Bank to an entrepreneur seeking to open a brick-and-mortar space in Detroit, Hamtramck or Highland Park. The competition promotes small business economic development and will take place over the next four months, with the crowning of this year’s winner in the spring. 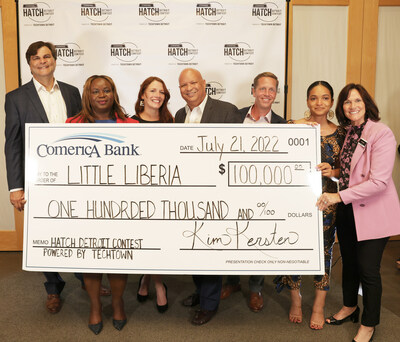 Entrepreneurs with a retail concept looking to open a brick-and-mortar location in Detroit, Highland Park or Hamtramck can now submit their business plans via the Hatch Detroit website through Feb. 21. Two information sessions will be held both in-person at TechTown Detroit and virtually on Feb. 2 and Feb. 9 to answer questions about the application and selection process. Interested entrepreneurs can sign up for information sessions at hatchdetroit.com.

The four-month contest includes two rounds of public voting – Top 10 and Top 4 – allowing the community to vote for their favorite business to win the $100,000 grand prize from Comerica Bank, as well as a package of accounting, legal, IT and public relations support from TechTown Detroit and their partners.

The Comerica Hatch Detroit Contest concludes Wednesday, April 26 with the annual “Hatch Off” during which the Top 4 present their business plan in front of a panel of judges and live audience, and the winner is announced. New this year, public voting for the Top 4 will take place live during the Hatch Off.

“This community contest helps bring the dream of an aspiring business owner closer to reality and serves as a vital resource for these budding entrepreneurs,” said Steve Davis, Comerica Bank Michigan Market President. “Hatch Detroit has left a lasting impact on Detroit’s economic revitalization by bolstering the entrepreneurial spirit, rewarding innovation and promoting small business development. Through our partnership with TechTown, we are proud to assist local entrepreneurs access the capital and technical assistance needed to take their small business to the next level and thrive.”

Last year’s winner was Ameneh Marhaba, chef and owner of the afro-fusion pop-up Little Liberia. Hatch Detroit provides funding, exposure and mentoring in support of its alumni entrepreneurs. Together, Hatch Detroit alumni have opened 50 businesses, employ over 500 people and invested more than $13 million in their businesses.

With this year’s investment, Comerica Bank and the Comerica Charitable Foundation will have committed nearly $1 million to Hatch Detroit since Comerica’s partnership began in 2012. The program has been one of Detroit’s most successful small business incubators since it first launched int 2011.

THE NEXT EVOLUTION OF HATCH DETROIT BY TECHTOWNIn 2022, TechTown Detroit and Hatch Detroit entered a partnership that integrated Hatch Detroit into TechTown’s suite of entrepreneurial programs and services, creating a sustainable future for Hatch with another Detroit-based nonprofit that also champions small businesses and local entrepreneurs.

In 2023, Vittoria Katanski, who served as executive director of Hatch Detroit, will take on a new role with TechTown as a strategist-in-residence for their small business services department to continue supporting the businesses that comprise the Hatch Detroit alumni network. Daily operations for Hatch Detroit will fall under Christianne Malone, assistant vice president for economic development at Wayne State University and chief program officer of TechTown Detroit.

From the inception of the Comerica Hatch Detroit Contest, Katanski’s focus has been not just to help launch one business, but to create an entire ecosystem of support that stimulates opportunities for entrepreneurs and generates a network of businesses prepared to navigate the challenges of launching a new venture in Detroit.

“In her 10 years as executive director, Vittoria worked very closely with alumni of the Comerica Hatch Detroit Contest and has made a lasting impact not only on the business owners but the program itself,” said Malone. “The overwhelming support and continued success of Hatch alumni are a testament to the sense of community and drive for innovation that Vittoria has cultivated through her creation of and work within Hatch Detroit. We’re grateful for her commitment to the city and its entrepreneurs, and we’re excited to build a sustainable future for the contest while working with Vittoria to continue the legacy of her work.”

Now, as a proven successful launch pad for aspiring business owners, this new iteration of the Comerica Hatch Detroit Contest, with the support of TechTown Detroit, aims to make an even bigger impact on Detroit’s small business economy while uplifting its entrepreneurial spirit.

COMERICA PROGRAMMING SUPPORTComerica has continued to strengthen its investment in the contest with economic development programming through technical assistance and financial education over the years. Support will occur during the Comerica Hatch Detroit Contest and with both Hatch Detroit and TechTown alumni following the contest.

“After a decade of Hatch Detroit competitions, we are still astounded by the pioneers that come through this contest and the success this contest fosters,” said Linda Nosegbe, Comerica Bank National Community Impact Manager. “A priority of ours is cultivating economic opportunity, especially in our underserved communities, and the Comerica Hatch Detroit Contest has served as a successful incubator and resource for businesses in Detroit. Beyond investing financially, assisting these entrepreneurs by giving them access to capital, technical assistance and business counsel to set them up for success is what makes this contest such an effective conduit for entrepreneurial growth.”

Comerica Bank, a subsidiary of Comerica Incorporated, has served Michigan longer than any other bank with a continuous presence dating back over 173 years to its Detroit founding in 1849. It is the largest bank employer in metro Detroit and has more than 4,500 employees (FTE) statewide. With one of the largest banking center networks in Michigan, Comerica nurtures lifelong relationships with unwavering integrity and financial prudence. Comerica positively impacts the lives of Michigan residents by helping customers be successful, providing financial support that assists hundreds of charitable organizations, and actively participating in Detroit’s downtown revitalization. Comerica Incorporated (NYSE: CMA) is a financial services company strategically aligned by three business segments: The Commercial Bank, The Retail Bank, and Wealth Management. Follow on Facebook: www.facebook.com/Comerica, Twitter: @ComericaBank and Instagram: @comerica_bank. Download new Comerica Bank corporate logo.

TechTown is a nonprofit business service organization that provides programs, education and resources for early- to growth-stage small businesses and tech entrepreneurs. By building bridges for entrepreneurs to succeed, TechTown is accelerating an inclusive economy for Detroit and Southeast Michigan. Since 2007, TechTown has supported more than 5,200 companies, which created 2,100 jobs and raised more than $207 million in startup and growth capital. For more information, visit techtowndetroit.org.

Hatch Detroit supports both existing and new retail initiatives in the cities of Detroit, Highland Park and Hamtramck. Hatch Detroit was founded in 2011 to give residents and aspiring entrepreneurs an opportunity to have a voice in neighborhood retail development and joined TechTown Detroit’s suite of entrepreneurial programs and services in 2022. Beyond the contest, Hatch Detroit provides funding, exposure and mentoring in support of its alumni entrepreneurs. With support from Hatch Detroit, 50 alumni have opened businesses. They employ over 500 people and have invested over $13 million in economic development. To learn more, visit hatchdetroit.com.