An Environmental Victory for the Bronx

The Revival of Tibbetts Brook: An Environmental Victory for the Bronx 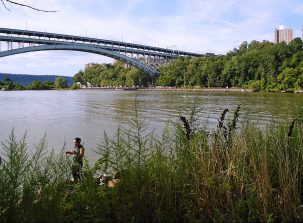 Muscota Marsh, the Harlem River, the Henry Hudson Bridge, the Spuyten Duyvil train station, and some apartment buildings in the Bronx, as seen from Inwood Hill Park.
Photo: Beyond My Ken

Much of New York City’s ecosystem has been paved over, reconfigured, and destroyed. But nature persists, and sometimes it teaches us that it’s better to live in harmony with it and to literally “go with the flow.” At one time, the waters from Tibbetts Brook drained into the Harlem River, but to enable land development in the Bronx, it was placed underground and drained into the New York City sewer system. On days when there is a great deal of rain, the brook’s water combined with sewage overwhelms the capacity of the city’s sewage treatment plants, and raw sewage is released into the Harlem River. A solution is to redirect or “daylight” the brook, and since its water is clean, it can bypass the sewage system and directly drain into the Harlem River. The Van Cortland Park Alliance website provides a detailed account of the problem:

“Tibbetts Brook is a body of water that flows from Yonkers into the Bronx in Van Cortlandt Park. This water currently flows partially in pipes under roadways while other parts are visible in Yonkers and within Van Cortlandt Park. The brook ends in Hester & Piero’s Mill Pond (formerly known as Van Cortlandt Lake) and enters the sewer system to be treated unnecessarily. On a dry day, 4 to 5 million gallons of water from the brook enter the sewer system. The combination of the water from the brook and from the sewer system creates overflow issues for the sewage system when it rains; these are also known as Combined Sewage Overflow (CSO) events… Tibbetts Brook is added into the sewer system unnecessarily [since it is not sewage], so environmental activists have been advocating for it to be removed from the sewer system and “daylighted.” Daylighting a body of water is the process of moving the water that has been diverted to an underground pipe above ground and adding in components to enhance the space.”

Community groups in the Bronx have been advocating for this project since the 1990s, and last week, the Adams administration removed the final obstacle to daylighting the brook and extending the greenway that will surround the renewed waterway. According to the Gothamist’s Jaclyn Jeffrey-Wilensky:

“The city will pay more than $11 million to freight rail company CSX Transportation for the strip of abandoned railroad tracks where the “daylighted” waterway will flow, the announcement stated. The project had stalled for years while the two parties went back and forth about the cost of the property…Tibbetts Brook, called Mosholu by the Lenape people, once flowed freely through the Bronx and emptied into the Harlem River. Over the centuries, sections of the waterway were dammed, buried underground and rerouted through the sewer system…Local advocates have also called for the city to build a park along the newly daylighted brook’s banks, connecting to the Putnam Greenway and Van Cortlandt Park. Plans by the city’s parks and environmental protection departments show paths where residents could walk, run and cycle, flanked by pocket wetlands and views of the waterway.”

The event that helped turn this green infrastructure dream into a reality was the rainfall resulting from the remnants of Hurricane Ida that hit New York City in September 2021. The city experienced an intense rainstorm, and not only did water overload the sewage treatment system, it also flooded the Major Deegan Expressway trapping cars and truck traffic for hours. Reporting on the Tibbetts proposal in the New York Times in late 2021, reporters Winnie Hue and James Thomas observed that:

“The plan to daylight Tibbetts Brook would be one of the city’s most ambitious green infrastructure projects. The brook would be rerouted above ground for one mile— including along a former railroad line that would be turned into a new greenway—before being sent back underground for a half mile in a new dedicated pipe to the Harlem River.”

The project’s $130-million price tag was not the largest problem in getting it started. The problem was the price of the abandoned train track owned by CSX Transportation. The Adams administration decided to pay CSX most of what they wanted due to the overwhelming logic of the plan and, I assume, an understanding of the quite positive financial benefits of the project, even with the added costs of land acquisition. CSX should be ashamed of taking the Bronx environment hostage, particularly in view of these fine words on their website:

“By operating responsibly, generating economic opportunities, and giving back, CSX makes a positive impact in the communities where we operate. Each year, CSX contributes millions of dollars in grants and in-kind donations to nonprofit organizations. We also offer community service opportunities for employees and their families.”

They proudly proclaim they are on Newsweek’s “Most Responsible Companies List.” Yes, they are responsible for charging New York City $11 million for an abandoned train track. The company’s behavior was detailed last November in a Riverdale Press piece by Sachi McClendon.

On our warmer planet, New York City can expect many more extreme weather events. Due to the impermeability of much of the city’s surfaces, we need to do much more to absorb, hold, and direct water away from places where flooding can do the most damage. Hurricane Ida not only flooded the Bronx, but over a dozen people died in illegally converted basement apartments in Queens, where five inches of rain fell in one hour. This project is one of many efforts to develop green infrastructure projects that will build New York City’s ability to withstand damage due to climate change. According to the New York City Department of Environmental Protection’s 2021 Green Infrastructure Report:

“In 2021, DEP submitted the list of constructed assets totaling 1,181 greened acres and 507 million gallons per year (MGY) CSO volume reduction for the 1.5% green infrastructure application rate milestone certification. Over 9,100 assets, constructed through over 50 individual construction contracts, went into the certification, demonstrating the tremendous effort that went into meeting the goal… As of early 2022, the Program has committed over $1.09 billion in capital funds since fiscal year 2012 and has approximately $771 million currently budgeted through fiscal year 2032.”

There are also efforts underway by the city’s Department of Transportation and Department of Parks and Recreation, as well as private developers, to reduce the number of paved surfaces in the five boroughs. These projects reduce the danger of flooding but also add green spaces and carbon-absorbing plantings that can help mitigate climate change. They also provide parkland to neighborhoods that have traditionally been underserved by our park system. One of the goals of the Bloomberg-era sustainability plan was to ensure that every New Yorker lived within a 10-minute walk from a park. According to the Trust for Public Land:

“New York City is home to some of the world’s most iconic parks. From the City’s Central Park to the Federal Government’s Gateway National Recreational Area—and every neighborhood park in between—99% of New Yorkers live within a 10-minute walk to a publicly accessible green space. Residents visit their parks over 527 million times per year…”

While no one would confuse New York City with an urban ecotopia, the 21st century has seen enormous progress in understanding the importance of adding green space and utilizing ecosystem services in New York City. Mayor Adams is struggling with enormous fiscal challenges ranging from our post-pandemic economic recovery to the costs of absorbing thousands of immigrants. Yet somehow within this environment, he managed to deliver the funds needed to get the Tibbetts Brook project back on track. It will keep our water cleaner and provide a new mile-long green space in the southern Bronx. Thirty years of advocacy by Bronx community-based environmental and parks groups resulted in this wonderful win for people and the planet. Mayor Adams deserves praise for deciding to make this investment in the Bronx and its bright future.