Ocean Protocol (OCEAN) Updates – A Company on the Move

There has been a renewed interest in AI-focused blockchains such as the Ocean Protocol as of late. The platform remains a pioneer in the data market due to its unique combination of features and recent improvements. The Ocean Protocol operates as an open-source blockchain-based data exchange. It empowers builders and startups to create more immersive applications to suit the needs of specific communities. Notably, the project has seen some major upgrades recently, which have helped the platform remain relevant.

The biggest upgrade to happen to the Ocean Protocol over the last 12 months would have to be the Ocean ONDA V4 Update. This upgrade made some vital changes to the way the Ocean Protocol operates and what assets it can leverage. The upgrade integrated Data NFTs which is a game changer in terms of flexibility and ROI potential.

Additionally, the system now has more flexibility in terms of data management which improves performance and integration. The upgrade includes an interactive interface geared toward data publishers, data consumers, and data marketplace operators. The upgrade also introduces a host of security features such as one-sided staking. 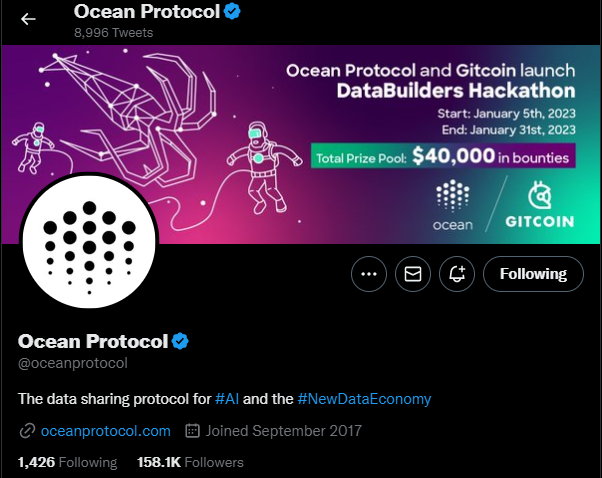 What is One-Sided Staking?

One-sided staking was designed to reduce whale manipulation and other problems such as rug pulls. The way it works is that a user stakes in the Clean Protocol pool as the first step. Then, the staker receives a data token that reflects the value they have staked. This asset can be traded or stored. When the user reaches the end of the staking period, the data tokens are automatically burned. This strategy reduces slippage drastically. It also prevents inflation as it ensures the supply always remains in check.

Another benefit of one-sided staking is that it eliminates the threat of rug pulls. A rug pull occurs when a project’s developers suddenly withdraw funding from the network without warning. These actions drop the value of the token and leave the remaining community holding the bag. The upgraded system improves security and provides a more inclusive community monetization strategy.

The ONDA V4 upgrade also adds support for ERC725y metadata fields which makes more on-chain data readily available to users. Most importantly, it introduces GDPR compliance via an integrated encryption system. Consequently, these NFTs are ideal for a huge variety of use case scenarios. They can represent data, art, or even other vital information such as comments, claims, identity credentials, user profile data, and social media posts.

DataFi NFTs represent the evolution of the distributed data business model. This upgrade enables the system to leverage the advantages and uniqueness of NFT tech to ensure that your information remains safe and trackable. Specifically, think of Data NFTs as the copyright for a data asset on the blockchain.

Notably, The upgraded system leverages the ERC721 NFT standard to provide high interoperability and functionality to users. This approach marks a major upgrade as it makes each piece of data a trackable and unique token on the blockchain. Notably, DATA NFTs can have a host of embedded information and regulatory requirements integrated into their core coding.

For example, you can integrate data concerning who can mint the tokens, who controls the fees, and how to transfer tokens. The unique thing about this approach is that DATA NFT creators can sell their tokens and their future revenue streams which helps to improve ROI potential substantially.

These tokens can also be sold or traded using the Ocean Protocol marketplace. Users can easily prove ownership and validate their data using the new technology. Additionally, this approach improves onboarding for new users. The biggest advantage of this upgrade is that it transforms normal cryptocurrency wallets and exchanges into data storage networks which improves their value considerably.

The upgrades also changed the fee-setting options available to users. Now, operators can collect fees in the pool-swap-based model as well as the marketplace. This approach opens the door for third-party data providers to offer services in the market for a fee.

Another major development for the Ocean protocol occurred when the Faculty Group, the distributed ledger collective, announced support for the network. The new initiative will help new projects built on the Ocean protocol to secure a comprehensive plan in support including incubation, development, marketing, market making, entertainment, token economics, and accessing funding.

The Faculty Group has pledged $5M to the Ocean Protocol Ecosystem Fund intending to improve the ecosystem. When asked about the significance of the fund, Ocean Protocol Founder, Bruce Pon, spoke about the excitement surrounding AI projects like Chat GPT.  He explained that all of these systems only improve Ocean Protocol’s positioning as large firms will seek to monetize data in the future using additional approaches.

Another major move that is worth mentioning is the launch of a $2 million fund that focuses on driving adoption. The new initiative includes projects across a variety of popular blockchains. Specifically, Ocean Protocol-powered apps deployed on Ethereum Mainnet, Polygon, Binance Smart Chain, Moonriver, and Energy Web Chain can qualify for funding.

This event marks the second time that the Ocean Shipyard has helped secure funding for projects. Last year, the project was a monumental success. It saw 40+ applicants with 10 qualifying for further support. This new round of funding is sure to drive innovation in the ecosystem further.

Notably, this funding round focused on Web3 and DeFi solutions. The developers want to see creators leverage the OCEAN protocol stack to secure funding. They have stated they are looking at protocols that leverage cutting-edge technology like fractional DATA NFTs, DATA NFT Lending, AMMs, and staking protocols.

Ocean Protocol creates a new Data Economy that improves access, transparency, and validity. Today, Ocean Protocol plays a vital role in a variety of applications. The network has also managed to cultivate a community of developers, innovators, and problem solvers as part of its growth strategy.

The Ocean Protocol has 150+ projects that leverage its systems such as Data NFTs. These Dapps include popular titles like Data Whale, DataX, Algovera, DataUnion, Felt, Ocean Pearl, Swash, and Transport Genie. These networks have leveraged Ocean Protocol to monitor and add value to their data. Thankfully, the introduction of Ocean Protocols’ latest update, Data NFTs, makes this process easier than ever.

The development team behind Ocean Protocol seeks to push the network further toward its goal of making data a new asset class. By creating an open data economy, the network provides a host of new opportunities to users and developers alike. In the end, innovators can create new markets and value using Ocean Protocol tools and services. As such, it serves a crucial niche in the market currently. These upgrades reflect that commitment. For more information on the project check out Investing in Ocean Protocol – Everything You Need to Know