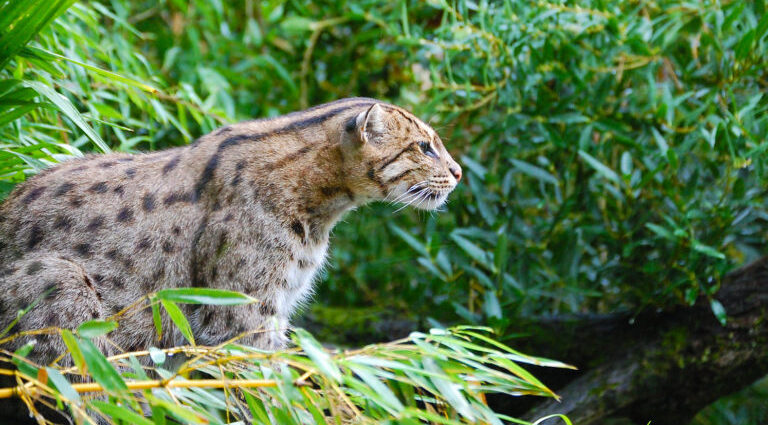 During a dietary study on fishing cats living near Colombo, Sri Lanka, researchers made an unexpected finding: Some scat samples collected contained plastics. Varying in size from tiny microplastics to larger debris in the form of macroplastics, these findings are cause for concern for the vulnerable species, say conservationists.

The results were “a bit of a shocker to all of us,” Anya Ratnayaka, a co-founder of the Urban Fishing Cat Conservation Project and lead author of the paper, told Mongabay in a video interview. The team collected 276 cat samples from fishing cats living in and around Colombo’s urban area and found that six contained plastics. “The fact that we even found any is a bit worrying,” she said.

Fishing cats (Prionailurus viverrinus) are a wetland-dependent species and eat a varied diet of fish, birds and small rodents. As they are not known to forage in or eat trash, it’s thought that the species was exposed to plastic via its prey; thus the researchers believe this is likely a case of trophic transfer, in which contaminants travel up the food chain. The results were recently published in the journal Environmental Pollution.

Bits of single-use plastic bags and pieces of nylon and polyester string were among the debris found in the scat, Ratnayaka said. Fishing cats tend to gut their prey prior to eating, which may explain why only a fraction of the samples contained plastic, she added.

Previously, researchers in Nepal also found plastic and glass in fishing cat scat around Koshi Tappu Wildlife Reserve. “The plastic pollution is going to be much higher [in urban areas],” Ratnayaka said. “But the fact that this is also happening in more wild, natural spaces is kind of alarming.”

Though research on the impacts of plastic ingestion on terrestrial wildlife is limited, the researchers say it could cause digestive blockages or leach harmful chemicals.

The fishing cat’s dietary habits and likely route of exposure add “another dimension to the problem of plastic pollution,” according to Michael Bertram, assistant professor in the Department of Wildlife, Fish, and Environmental Studies at the Swedish University of Agricultural Sciences. “Clearly, ingestion of potentially harmful pollution originating from anthropogenic activities by animals of this species is cause for concern,” Bertram, who was not involved in the research, wrote in an email.

The IUCN, the global wildlife conservation authority, considers fishing cats to be vulnerable across their range, which spans South and Southeast Asia. Like other wild cat species, they face a plethora of threats, including habitat loss, persecution, pollution and disease. Given the rapid conversion and destruction of the wetland habitats on which they depend, the species is particularly at risk.

“The new study provides one more lens to analyze threats affecting fishing cats and is very, very concerning,” Tiasa Adhya, a wildlife biologist and co-founder of The Fishing Cat Project, who was not involved in the study, wrote in an email.

In her view, the study’s findings also raise further questions, such as how other threats are combining with indirect plastic consumption to impact the species, and what this exposure might mean for younger cats. “It is worth continuing to study the impact of such pollutants on the long-term survival of populations and any effect these might have on the genetic makeup of populations,” she said.

Following the study, the conservationists are aiming to install plastic traps on river outlets flowing into wetland areas and to investigate plastic levels in the guts of the cat’s prey species, such as fish and waterbirds. “I feel that everyone is concentrating on marine environments, but we also need to try and figure out what’s happening in our terrestrial and freshwater systems as well,” Ratnayaka said.

Banner image: Researchers found plastic in the scat of fishing cats in Colombo, Sri Lanka. Though levels were low, the discovery is cause for concern, says study co-author Anya Ratnayaka. Image by Dulup via Flickr (CC BY-SA 2.0).